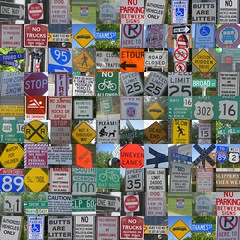 Many years ago when this nation was freer, richer, and more rational compared with today the problem of the many states having different standards for signs and other traffic control devices was solved by standardizing the system. Today that set of standards is known as the Manual on Uniform Traffic Control Devices. Europe solved a similar issue between multiple nations with the Vienna Convention on Road Signs and Signals.

The goal of both of these conventions is that drivers, no matter where they travel will be able to understand the signals and signs. This leads to a safer and more efficient driving environment for everyone.  Sadly the world is no longer so rational and technically minded. Today people are much more ignorant of such basic technical necessity and much more emotional. Rather than looking for a solution people are quick to call for punishment out of anger or frustration. The state being what it is, is taking full advantage.

These sign standards have the power of law when they are adopted into a nation’s or state’s vehicle code. If they are not there is some other standard which is. It is not so much what standard, but that there is a standard by which units of government are obligated to follow. These standards are also designed to prevent government from creating ticketing traps with poorly engineered traffic control devices. For instance a triangular purple speed limit sign with a 10 point font on a sign 30 feet up on a light pole would not be legal.

When written properly and followed standardizing the traffic control devices works wonderfully. Over time more and more is learned and incorporated into the manual leading to safer and more efficient roads. Or at least it did until traffic enforcement became a gigantic public-private (corporatist) cash machine. While speeding tickets and other nonsense have been the revenue source for countless small towns, corrupt police departments and so on the introduction of technology and insurance company lobbying really caused it to take off. Companies exist selling radar, laser, and other speed measurement technologies to units of government. Insurance companies found new ways of surcharging the safest drivers for pure profit and encouraged it by giving police departments radar guns. But that wasn’t enough… photo enforcement came and that is where the really big money is at.

First the government needed to create a problem. Slowly the standards for signal timing were changed. MUTCD, ITE, and other standards were altered against the knowledge gathered over decades. This created the red light running problem, and no driver out there likes red light runners. Once the tried and true methods of fixing a red light running problem in the 1970s were abandoned, enforcement, perfectly in fit with the modern emotional mentality of punishing people into being good was ready for wide use. Red light cameras began appearing across the nation and the cash started rolling in.  Meanwhile in Europe the camera enforcement was for good old speed and all the old tricks of the cops in the USA were employed in their deployment. Camera’s behind bushes, sudden drops in speed limit, and much much more.

However, europeans haven’t been so complacent…. they often destroy the cameras. I think of all the methods I find the flaming tire the best.

Speed cameras and red light cameras have been less than useless when it comes to safety. Although that is of no surprise except maybe to the state’s captive intellectuals who couldn’t get on the global warming gravy train but make their living writing in support of the cameras. Lately though it seems that such compliant intellectuals aren’t even needed any longer because there isn’t even a reason to change a standard or law if it can just be ignored.

Simply ignoring the standards for revenue seems to be the way things are done now. Paying attention to the standards has come and gone. Intelligent drivers may have noticed that signals and signs in recent years are getting more confusing, more difficult to read, and even conflicting. Now the most common belief is that it is just the stupidity of the government. But that reasoning fails IMO because the government directly benefits from the confusion and usually has a camera or cop there to collect the fines instead of fixing the underlying problems. In fact, the solution presented to the problem isn’t fixing the conditions, it’s more enforcement and higher fines.

I’ve seen enforced signs that look like they were made in the basement of city hall. I’ve seen intersections where a driver can see the signal for both directions at the same time.  The City of Chicago started putting parking regulatory signs 20 feet up on the light poles until an outcry that got the attention of aldermen caused them to put an end to the practice.

Time and time again those in government “service”  ignore the rules yet the courts uphold the tickets.  Judges if they care at all will have no clue what the MUTCD is nor will they care. They are just as emotional and irrational and non-technical as the public at large. That is of course giving them the benefit of the doubt that they don’t understand the technical underpinnings of the scam which they help run.  Making a MUTCD argument just angers the judge by keeping him from more important things like his golf game.

The practice of enforcement has become so prevalent that working solutions that have been in place for countless years are being abandoned. One shining example is this recent story from the UK. A somewhat simple set up was abandoned for a highly complex one, complete with photo enforcement. Safety will be achieved through punishment, through force, instead of sound engineering. Too bad enforcement cameras don’t stop collisions, just take pictures of the events that contributed to the causes of them. Yet people still think government is concerned for our safety.

It won’t matter how much property is damaged, how many people are hurt or killed, the government is in this for the money (and power) and it will maintain the illusion it is being done for our safety regardless of the true outcome. Because the concepts of following arbitrary rules and being punished for violating them are so widely spread with a large amount of willful technical ignorance the scams will continue with the approval of the majority of the people. As the roads become less safe the greater the punishments and intrusion there will be which in turn makes them less safe than before while further eroding any respect for why there are rules of the road in the first place.

Expect to see a lot more nonstandard signs and signals before this runs its course… if we are still driving then at all.