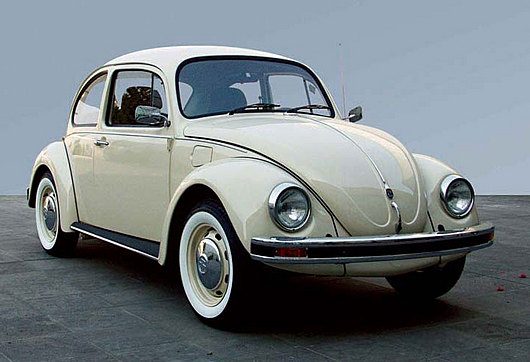 I’ve begun to notice a fair number of old (Mark I) Beetles on the road. The original ones.  Last sold here (new) in the late ’70s. Not at car shows (or on their way to/from one). But in traffic, being used as everyday drivers. My survey is  far from scientific, but my eyes are telling me that there are more and more people who are turning their backs on federally-approved, late model “government mandated” cars with all their costs and complexities and returning to cars that (mostly) did what the people who bought them (as opposed to the government) wanted them to.

The Mark I Bug is such a car. A simple car – but a brilliantly engineered one.

It weighs less than 2,000 pounds, in part because it does not have a separate frame onto which body panels are bolted (the common practice when it was designed back in the 1930s and for decades afterward). But also because when it was conceived, the designers did not have to add heavy structural elements (or air bags) in order to meet government “safety” requirements. There is nothing wrong with “safety,” of course. But back then, it was not the government’s role to define it – or prioritize it. If a buyer thought the Beetle insubstantial, he was free to choose a more substantial (if less economical) alternative. But the buyer who liked the idea of superior fuel economy – a Bug can get 30 MPG, despite 1930s’-era technology – even if it meant he might fare less well in an accident, was free to judge the relative risks vs. the advantages and decide for himself.

And because there were no “mandates” the Bug could get by with a very small four cylinder engine that was also a gem of functional engineering. It was made entirely of alloy (another rare thing, both in the 1930s and for decades thereafter) and was itself so light that a man could remove it from the car all by himself with a floor jack and a couple of 2x4s. The alloy material also warmed up much faster than cast iron, which improved cold-weather driveability and also gave the passengers near -instantaneous heat – which was cleverly supplied by tin ductwork fitted over the engine to capture and make use of its heat. The air-cooled engine did not require a radiator and all the other bits and pieces that are part and parcel of water-cooled engines.

The engine was – as is well-known – also mounted in the rear, right on top of the drive wheels. This gave excellent traction  – which was made even better in deep snow by VW’s use of skinny (but tall) wheels and tires, which cut right down to the pavement instead of compacting the snow underneath them. Mark I Beetles are tenacious and will go almost anywhere. They are superior to most modern FWD cars in the snow – and will give many modern AWD cars a run for the money, in part because most modern AWD cars are fitted with ludicrous (for the snow) “performance” tires that are 3-4 times the width of the Beetle’s 15 inchers.

Fuel was metered to the engine via a single Solex 1-barrel carburetor, once again the essence of simple – but functional – engineering. The transmission and axle were melded together into a single, compact transaxle unit that bolted to the back of the engine – another design innovation that did not become common until the 1980s, almost 50 years after the Beetle’s conception.

Basic maintenance consists of changing out the 3-4 quarts of oil (no filter to deal with, just a screen to clean), maybe a new set of plugs, adjust the points and carburetor, set the timing. Maybe run some grease along a few cables. All easily done by the home mechanic with the most basic tools – and for less than $50 for everything.

There is no “check engine” light, no ECM – and no computer hook-up is necessary to determine how much oil’s in the crankcase (as in current BMW models – no kidding). There is, in brief, not much to do – except drive the thing.

Yes, occasionally a problem crops up. But the difference vs. a modern (government-mandated) car is that the problem will be three things:

We have lost – been deprived of – all three of these things by government-mandated cars, which though more reliable on a day-to-day basis also are not simple when they do have a problem, rarely inexpensive to fix – and almost never fixable by you.

And so, there is a peaceful rebellion of sorts developing. Government can force the automakers to build ever-more-complex, ever-more-expensive new cars that increasingly require 5-6 year mini-mortgages to buy and the ability to pay a $70-per-hour “technician”  to service. But government can’t force people to buy these marvels of technology – and tyranny.

We can just say no.

And instead, we can buy cars built in the pre-government era (roughly, before the early 1970s) that are free of  the encumbrances – and expense – that has been layered on over the past 40-something years.

The Beetle Mark I’s resurgent popularity tells me that at least some people have figured out that while you can’t fight city hall, you can do an end run around city hall.

At least, for now. Until the Clovers begin to notice people evading their “safe” government-issued cars and trucks. Then we’ll hear calls to ban cars like the Mark I that don’t have everything the Clovers desire – and demand. Even though, of course, the Clovers are just as free to buy what they want as we are (for the present) free to buy what we want. But that’s never sufficient. Clovers can’t abide people doing anything different – let alone doing what they want to do, especially when it is not what the Clovers want them to do.

Wait and see. New cars are going to become much more expensive to buy in the next few years, both as a result of inflation but also as a result of the latest slew of edicts from Washington – especially the just-passed 56 MPG “fleet average” fuel economy requirement. That is going to drive more and more people away from new cars – and toward sane cars like the Beetle Mark I.

And that will drive the Clovers into conniptions.