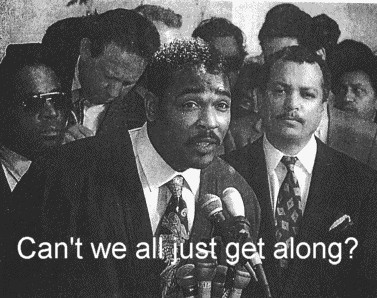 St. Rodney the Divine posed this question almost 15 years ago and it’s just as relevant today.

Road manners in the United States are atrocious. Obliviousness, incompetence and deliberate passive-aggressiveness make the experience of getting from “a” to “b” unpleasant, stressful and more time-consuming than it ought to be. And more dangerous, too.

New laws are not the answer. We have enough laws already. They’re mostly counterproductive laws, too – such as those which assume everyone’s inept because some are inept, such as “no right on red” laws.

No, what’s needed is something more organic and spontaneous. Something that could be subsumed under the heading, common courtesy.

I’ll give you an example.

Every day – literally, every single day – I find myself stuck behind another driver who is not only traveling much more slowly than I am but also more slowly than the posted speed limit. This is on my 35 mile trip into “town” (we live in the boondocks) on a two-lane road (one lane each way). It is a not-busy road and the slow-mover ahead could easily pull off onto the shoulder and let me (and other faster-moving cars) get by. I often do this myself when I am coming back up the mountain in my old truck, the bed loaded down with stuff.  In my opinion, you have to be a PhD Dickhead to deliberately block traffic and force others to proceed at your pace. Why not just pull off to the side?

It only takes a moment – and defuses a tense situation (for all parties) immediately.

Yet this simple act of common courtesy is scarcely seen – at least, in my experience. People will see you back there and still refuse to pull off/over and wave you by them. I find this startling. People – generally – don’t just stand in your way at a store, for instance – knowing you are back there and purposely blocking you from getting to something you want. Usually, they’ll see you there and oblige by moving over enough to allow you in. Often with an “oh, excuse me”or “sorry” added for good measure.

But put some of these same people behind the wheel of a car… .

How about this one:

You are approaching an intersection to make a left turn. There is a car ahead of you, not turning but blocking the left turn lane. You notice there’s ample space for this driver to pull forward enough so that you can squeeze into the turn lane – and make the light. But the PhD Dick – who sees you – just sits there. What conclusion can one draw from this? The only explanation that comes to mind is that the blocking driver is enjoying this small exertion of power over you. He is getting his kicks knowing that he has prevented you from squeezing by – and making the light.

Oh Brave New World that has such people in it!

But the thing that amazes – appalls – me the most about all this is not the DMV-grade malice, the low-rent sadism on display. It’s the pointlessness of it all. Common courtesy comes at no cost to you – and (provided others behave courteously in return) ends up redounding to your benefit. Consider the example of the refuse-to-yielder. How does it harm him to allow you to get by? His travel is not impeded and if anything, his trip should be less stressful, since he no longer has a tail of other cars hanging off his bumper. If everyone, as a matter of reflex, gave way to faster-moving traffic, how swimmingly – how civilized – going for a drive would be.

Instead people behave like silverback gorillas – only without the silverback’s courage, because at least a silverback will actually confront his opposing silverback in person (so to speak) while the typical Cloverite passive-aggressive American driver will simply use his car to make his point.

If you stop to think about it, this pattern repeats on other levels, such as the political. Most people would never threaten their neighbor with violence in order to force him to give them money. Yet the will routinely – casually – vote in favor of doing  precisely the same thing, only by proxy. They lack both physical and moral courage to steal, but provided it is called something else and done by someone else, then it’s ok.

It’s the same with road manners.

Well, we need a wake-up call – and a remedial lesson, too. Nothing good comes of theft – or being a PhD Dick behind the wheel, either. You may think you’ve got the upper hand, that you’ve “taught them a lesson” – but in fact all you’ve succeeded in doing is ratcheting up the Hate, and that will come back to bite you in the ass one day, too.