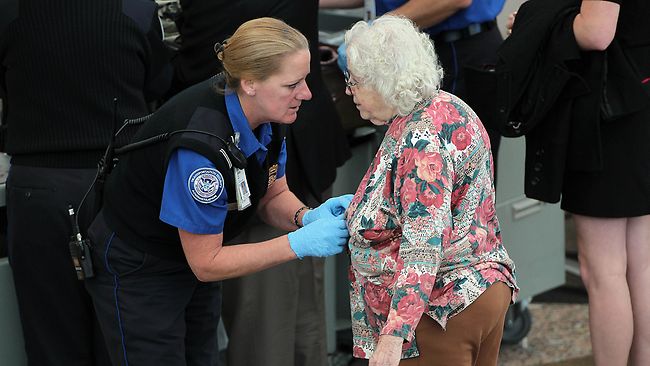 Among other things, tyranny is stupid.

The other day, a clearly dangerous Enemy of Freedom – a pregnant 17-year-old white American teenage girl named Vanessa Gibbs – was threatened with a “federal offense” by a TSA baboon while trying to get on her flight from Norfolk, Va. back home to Jacksonville, Florida because  (wait for it) she had a Western-style leather purse embossed with a decorative and clearly not real gun on its side. The TSA baboon, flushed with its authoritay, could probably tell the difference but found it now enjoyed the excuse to not merely harass but terrorize a teenage girl, who found herself under the baboon’s arbitrary power.

Because the baboon says so.

This incident is far from unique or isolated.

The TSA has repeatedly shown both stupidity and malice – the ugly yin-yan of police states throughout history. This is deliberate, even if it’s not formally expressed in overt policy. Because the goal is not “protecting our freedom” or even “security.”

It is to frighten, demean and cow the citizenry. To make it clear to them that arbitrary power may be exerted over them at any time – and from which there is no appeal.

This is the true purpose of the “tools” given to an army of low-rent mall security guards empowered with very real weaponry and fearsome authoritay. Note carefully that these people are typically the dregs of society – people with little education and not much intelligence. And with no respect whatsoever for your rights. People who, by definition, are antithetical to what America – and being an American – once meant.

The kind of people just itching to finally have some power over their fellow men (and women, too). They are precisely the same kinds of people who formed the cohorts of the Khmer Rouge,

the Red Guards and, of course, the SA.  The state knows such people are ready to be, as the author Jonah Goldhagen put it, the willing executioners of the state. They are eager to do it. Anyone who has traveled recently and witnessed the system in action is well-aware of this.

What sort of creature would, for example, willingly force elderly (and often crippled) people to drop their Depends? Make a small child spread its arms and legs like a felon and submit to being handled? Threaten a clearly harmless teenage girl with a “federal offense” because of a design on her purse?

In a word, what sort of thing would spend its working days belittling people and making them feel its power  over them? Think about it. I am not being harsh – I am stating an uncomfortable truth that we’d better confront real soon, before it’s too late.

These people don’t give a fig for your rights – let alone your dignity. The only thing that matters to them is…

Do not question. Do not dare to talk back. Do As You Are Told. Immediately.

Such people – people who willingly sign up for such duty – are loathsome. Beneath  contempt. Despicable. Do not tell me “it’s just a job” or “I need the money.” Adolf Eichmann told us it was “just a job,” also. If you take it upon yourself to assault innocent people, whether as a private thug or a uniformed thug acting under color of law, you are nonetheless a thug.

And should be regarded as such by all decent people.

If anything, you are worse than a common street thug. Because a citizen can smash a street thug in the face when it accosts them.  But if a citizen talks back to a TSA baboon or another of the various subspecies of uniformed apes out there, the citizen risks lethal violence which may not legally be resisted.

The other day I came across a superb column which discussed authoritarian over-reaction – such as spraying non-violent protestors with pepper spray, Tazering soccer moms for daring to talk back to a cop; the militarization of everything, even language – and how the phenomenon has come to characterize life in the United States nowadays. The Gibbs incident is illustrative. We have empowered mall security types – the sort of losers my generation made fun of when we were teenagers back in the 1980s – with the power to literally nacht und nebel people off the concourse to some “secure location” in order to question/berate them over such things as having a purse with a decoration on it that looks like an old West six-shooter.

Had this poor girl – quite understandably – laughed at or mouthed off to  the TSA “agent” you can imagine what would have happened next. Cuffs, Tazers – the  perp walk to some windowless room for several hours of berating by those Concerned With Protecting Our Freedoms.

Instead, Gibbs was shunted onto another flight and told she must either turn her purse over to the TSA baboons or “check” it – which often amounts to the same thing (pilferage on a Third World scale is now routine at U.S. airports). She eventually made it back home, via Orlando. Gibbs’ mother, Tami, told the Associated Press that she was “… on the phone all the way to Orlando trying to figure out what was going on with her. It was terrifying.”

We’ve allowed utter cretins to invest themselves with unlimited power, noxiously telling us it is necessary in order to “protect” us. It will end with some of us in protective custody. Those who see what’s coming – indeed, what is already here.

And who will, at last, refuse to  Submit and Obey.