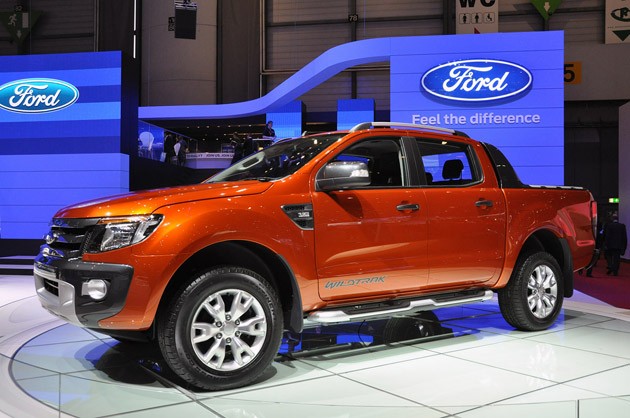 I’ve just discovered that Ford has dropped the Ranger – America’s last compact-sized truck –  for 2012. But not from its lineup. Just from its U.S. model lineup. Not only will the Ranger continue to be sold in export markets, the 2012 model will be a heavily updated model which, among other things, will offer a new diesel engine – something you can’t get in any current pick-up in the U.S. that’s not at least a 2500 series behemoth with a price tag well over $30,000. Meanwhile, the Aussies, among others, will get a brand-new Ranger, revealed at the Thailand International Motor Expo last month. It is a handsome-looker, with an available quad cab body and an all-new interior.

The 2.2 liter, four-cylinder Duratorq TDCi diesel-equipped version – offered with either six-speed manual or six-speed automatic – sounds like just the ticket for the U.S. market, too.

But, we lose. It’s not coming here.

The official reason for not giving American buyers the opportunity to buy this truck is that – supposedly – Ranger is too close to F-150 and so “redundant.”

Which makes no sense, especially since as recently as the 2010 New York Auto Show, Ford Spokeswoman April Fursten told www.pickuptrucks.com that “We took a long look at Ranger sales over the last two years and the numbers are better than we forecasted. Year-to-date, it’s outpacing 2009’s numbers, selling better than the all-new Flex crossover and is only about 2,000 less units than the recently updated Mustang… .” Fursten added that “(Ford CEO Alan) Mullaly said we be nuts to kill the Ranger in the U.S. because more than 7 million have been sold since 1983.”

The Ranger may not be a best-seller, but it’s a consistently solid seller. And its been a staple of the Ford lineup for three decades.You don’t just throw away brand equity like that. Also, it’s the only compact truck on the market, so Ford has the market all to itself.

Ranger has a reasonably fuel-efficient four-cylinder engine capable of 22 MPG city, 27 MPG on the highway. The best the much larger F-150 can do is 17 city, 23 highway. That 4-5 MPG split may not sound like all that much but to many people in this economy, it’s a difference that matters. (I own a compact, four-cylinder pick-up myself that I bought precisely because I did not need a V-6 nor want to feed a V-6.)

And with the new Duratorq diesel, the upated 2012 Ranger is probably good for 30-plus on the highway, which would surely draw buyers’ attention. And not just because of the better mileage. The diesel would be better-suited to pulling and off-roading. You know, the kinds of things that people who buy trucks tend to be interested in. And there’s longevity. Assuming it’s a solid design, a decently cared for Duratorq engine ought to last longer than the truck itself. Another selling point.

I expect a lot of people are not going to be happy about this.

Size also does matter to many people.

Not everyone wants a 1500 series truck. The F-150 is a big truck. Even the regular cab model stretches 213.2 inches bumper to bumper vs. 189.4 for the regular cab Ranger. That’s about two feet (and about 500 pounds) more truck than a lot of buyers need.

A compact-sized truck makes a great runabout. It’s easier to maneuver and park. And it’s pretty good on gas. What’s wrong with this picture? What would make Ford think that the compact-sized Ranger, which has sold well for decades, is wrong in concept? Actually, not wrong in concept – because after all, Ford committed major resources to significantly update it for 2012. Which certainly implies that Ford sees a future for the truck.

The only thing I can come up with is… CAFE. The federal government’s fuel efficiency edicts. But wait, isn’t the Ranger more fuel-efficient than the F-truck? Wouldn’t a diesel Ranger be even more so? Yes, and yes. So?

CAFE is about fleet averages, which are measured based on annual production totals. So, the more of a given vehicle that gets less-than-par MPGs (35.5 MPGs by 2016) the lower a car company’s overall fleet average CAFE score. By getting rid of the Ranger, Ford will produce fewer trucks overall that don’t make the CAFE cut, which will help float the final number.

Ford is not going to drop the F-truck, a best-seller. But the merely ok-selling Ranger is expendable.

But don’t blame Ford. Or at least, don’t be too hard on Ford. It did what it probably had to do. Faced with the Hobson’s choice of keeping Ranger in the U.S. lineup and losing probably millions courtesy of CAFE fines or dropping the truck and losing a few thousand buyers – some of whom Ford knows it can probably up-sell into a new F-truck – the decision was predictable.

It’s just too bad that, once again, American consumers get to pay more – and get one less choice to make themselves – courtesy of the Clovers in Washington.

How Clovers are Made and (Possibly) Not Born