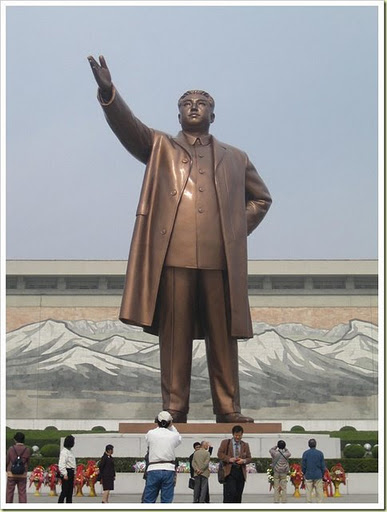 And Obama might as well start calling himself Dear Leader:

Indefinite military detention of Americans became the law of the land Saturday, as President Barack Obama signed a defense bill that codified that authority, even as he said he would not use it.

The National Defense Authorization Act states how the military is to be funded, but also includes a number of controversial provisions on arresting and holding suspected terrorists, which at first drove Obama to threaten a veto.

He retreated from that threat after Congress added provisions that took the ultimate authority to detain suspects from the military’s hands and gave it to the president. Congress also clarified that civilian law enforcement agencies — such as the FBI — would still have authority to investigate terrorism and added a provision that asserts nothing in the detention measures changes current law regarding U.S. citizens.

Still, the signing on New Year’s Eve as few people were paying attention angered civil liberties advocates, who argue that the law for the first time spells out certain measures that have not actually been tested all the way to the Supreme Court, including the possibility of detaining citizens in military custody without trial for as long as there is a war on terror.

“President Obama’s action today is a blight on his legacy because he will forever be known as the president who signed indefinite detention without charge or trial into law,” said Anthony Romero, executive director of the American Civil Liberties Union.

“The statute is particularly dangerous because it has no temporal or geographic limitations, and can be used by this and future presidents to militarily detain people captured far from any battlefield,” Romero added. “The ACLU will fight worldwide detention authority wherever we can, be it in court, in Congress or internationally.”

The administration was especially sensitive about the law and about reaction to the president signing it. In addition to enacting the measure while few people were paying attention — and many opponents still had hopes the president would veto the bill — the White House added a signing statement specifying that the Obama administration would not detain Americans without trial. The White House also sent out a notice to its online community highlighting Obama’s complaints with the law, in a tacit admission that many of the president’s more ardent supporters despise the detention provisions.

“I have signed this bill despite having serious reservations with certain provisions that regulate the detention, interrogation, and prosecution of suspected terrorists,” Obama said in the signing statement.

Presidents issue such statements when they feel a law conflicts with the executive’s constitutional powers. Obama criticized them during the Bush administration, but has found the practice useful on a handful of occasions.

In this case, Obama argued that the changes Congress made to the bill affirm only authorities that the Bush and Obama administrations have already claimed in fighting terrorism. But he noted that the codification of those powers in law was unnecessary and perhaps harmful. And he insisted he would not use the powers to detain citizens without trial.

“I want to clarify that my administration will not authorize the indefinite military detention without trial of American citizens,” Obama wrote. “Indeed, I believe that doing so would break with our most important traditions and values as a Nation. My administration will interpret section 1021 [of the bill] in a manner that ensures that any detention it authorizes complies with the Constitution, the laws of war, and all other applicable law.”

Civil liberties advocates like Romero pointed out that once the provisions are law, however, they will be available to a President Newt Gingrich or Mitt Romney or any future president, who could choose to use the powers granted more aggressively.

“We are incredibly disappointed that President Obama signed this new law even though his administration had already claimed overly broad detention authority in court,” said Romero. “Any hope that the Obama administration would roll back the constitutional excesses of George Bush in the war on terror was extinguished today.”

Because of the provisions specifying that the new legislation does not change current law, the new law leaves the authority it grants open to interpretation and to the possibility — albeit in very difficult circumstances — of someone challenging a detention through the courts.

“Thankfully, we have three branches of government, and the final word belongs to the Supreme Court, which has yet to rule on the scope of detention authority,” Romero said. “But Congress and the president also have a role to play in cleaning up the mess they have created, because no American citizen or anyone else should live in fear of this or any future president misusing the NDAA’s detention authority.”

Obama also said he will not abide by the law’s requirement to detain terror suspects using the military.

“I reject any approach that would mandate military custody where law enforcement provides the best method of incapacitating a terrorist threat,” Obama said. “While section 1022 is unnecessary and has the potential to create uncertainty, I have signed the bill because I believe that this section can be interpreted and applied in a manner that avoids undue harm to our current operations.”

Finally, he rejected a number of other provisions, saying the White House is concerned they interfere with the president’s constitutional powers and ability to fight terrorism.

“My Administration will aggressively seek to mitigate those concerns through the design of implementation procedures and other authorities available to me as Chief Executive and Commander in Chief, will oppose any attempt to extend or expand them in the future, and will seek the repeal of any provisions that undermine the policies and values that have guided my Administration throughout my time in office,” Obama warned.