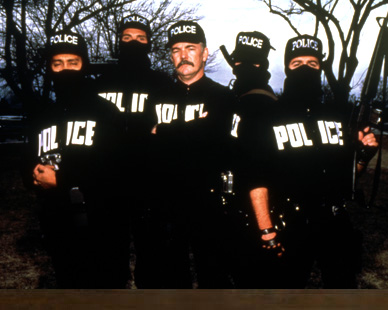 Bad laws attract bad people to enforce them – while pushing out the good (and semi-good) people. It’s a sort of Gresham’s Law as applied to human society. And more, a sort of authoritarian feedback loop that makes the situation progressively worse as time goes by.

Consider the position of “law enforcer” in 2012 America. What does it entail? When we had peace officers, it mostly meant going after thugs – people who victimize others by threatening them with violence. Frauds and crooks, too. In brief, it meant going after those who violate the rights of others.

It was – generally – an honorable way to earn one’s living. Most citizens therefore respected cops – or at least did not actively dislike and fear cops. Most cops were “ok.” They – generally – could be counted on to leave you alone unless you’d actually done something to warrant not being left alone. It was a quid pro quo that made sense no matter which side of the fence you happened to be on.

Today, it is law enforcement that threatens harmless, morally (if not legally) innocent people with violence. The guy who, for example, grows a small batch of pot plants in his backyard (as opposed to the lawful citizen who brews his own beer). Or the seatbelt scofflaw – whose actions threaten harm to none except, perhaps, himself (and even then, only potentially).  Or the farmer who sells “unapproved” milk to his neighbors. And the students who dare to exercise their right to peaceable assembly. The driver who declines to be a witness against himself and refuses to submit, sans warrant – and very often, sans probable cause – to a random stop and search of his vehicle and person.

The list of victimless crimes – and latter-day victims of law enforcement – is long. Citizens are aware of the creepy fact that being a peaceful, harmless person who respects the rights of others is no longer sufficient to avoid becoming the target of a law enforcer. That the law increasingly targets people who have violated no other person’s rights – but who have violated “the law.” That is, who have committed some affront against the state.

Which is why citizens today increasingly dislike – and fear – these law enforcers. It is also why today we have essentially three kinds people who suit up for this sort of work:

Type one: The robotic “just doing my job” type. He is either not smart enough or introspective/thoughtful enough to consider the nature of the system; whether the laws are just or even reasonable. This is the cop type that can’t be reasoned with and more, the type who will enforce any law and any order simply because it’s an order or because it’s the law. Nothing more is required. He just follows orders. And it’s our job to Obey.

The upshot is this type of cop is only bad to the extent that the laws he enforces are bad. There is a limit. He usually won’t exceed the law or go beyond what he is ordered to do (because then he’d be exercising initiative and this type of cop is almost constitutionally incapable of that because it conflicts with his inner prime directive of obedience to the hierarchy.) He is fundamentally a bureaucrat. Bad perhaps, but not usually deliberately vicious.

Type two: The power-luster. This one enjoys wielding power over others. It makes him feel big and strong. He is often narcissistic and may even be sadistic. He absolutely lacks empathy. He sees us as ” civilians” – or worse. And it’s our job to Submit.

This type of enforcer is frightening because given the opportunity he will assault and possibly even kill you. And he’s actively looking for that opportunity. A recent example being the group of such enforcers in Fullerton, CA who beat a helpless homeless man to death (see here: http://www.youtube.com/watch?v=eKGMaJG7gT4).  And they will feel no remorse afterward. Indeed, they will get pleasure out of it. This is the sort of person who would have – and may yet again – line people up in front of a ditch.

Or man an oven.

Type three: The old school cop. He is usually old, literally. A relic of the days when cops didn’t expect immediate submission, when cops were expected to treat citizens civilly. He has mellowed – or become aware (and thus, cynical) about the nature of The Job. He tries to be decent, within the boundaries of what’s possible given “the law” and current law enforcement culture. He’s close to retirement, though, and doesn’t want to make too many waves. He’s also rare. You might get him one out of ten times these days.

Expect to see much less of him in the future, too.

His type is being screened out, actively and otherwise. Actively, because our increasingly militarized “law enforcement” agencies seek order-followers as new recruits. And who better-prepared (better conditioned) to follow orders than ex-military? A decade’s worth of combat (well, occupation) hardened veterans has streamed back to the Homeland in search of work – and what work are they better-prepared for than law enforcement?

Note well that these law enforcers typically have a military rank structure. The head enforcer is often festooned with general’s stars or a colonel’s silver eagles. They wear menacing black BDUs, complete with flak jackets or body armor. Even in the country, were the major crimes are hunting out of season or getting a bit too boozed up on a Friday night. I live in an extremely rural part of southwest Virginia in a county that has literally one traffic light. Yet even here, courtesy of the Heimatsicherheitsdeinst apparat that sprouted after 911, there is now a bulletproofed “command post” and all the accoutrements of  a fully militarized “law enforcement” department.

They, too, are just “following orders.” And local people have noticed that the new crop of cop is crew cut and unforgiving. Andy Griffith need not apply. His kind’s not wanted anymore. Of course, Andy wouldn’t want any part of this mess anyhow.