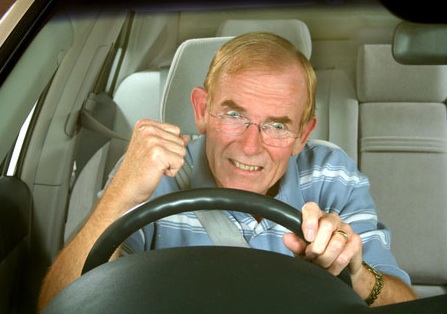 Charles Darwin categorized the flora and fauna of the Galapagos Islands. My job is to provide a taxonomy of Cloveris Americanus – the various sub-species of atrocious “driver” who makes driving miserable for those of us who can:

This type of Clover likes to go fast when the road is straight but will mash the brakes at the first sign of even the gentlest of curves – creating an accordion effect as traffic speeds up, then slows down. This Clover has the urge but not the skill to drive fast, so he drives fast erratically – a sure sign he’s in over his head and ought to be given a wide berth. Of limited intelligence, this form of Clover will continue to drive above his abilities rather than simply pull off to the side (or move right) to allow the cars stacking up behind him to get by. The Bracket Racer, like all Clovers, is fiercely territorial and will defend what it considers to be its territory ruthlessly.

This is a Clover of contradictions. It is known for rigid adherence to the speed limit, which to it is a sort of god or golem whose speechless diktats must be obeyed as Holy Writ… yet is frequently the cause of rear-ender wrecks as a result of hanging inches off the bumper of the car ahead. The Bumper Rider is a simple creature and so has trouble with math and physics, especially as they pertain to the concept of following distance. This type of Clover will do the speed limit, all right – inches away from your bumper. And its aversion to transgressing the speed limit notwithstanding, if you speed up, it will speed up – closing the distance you’re trying to establish in order to maintain the remora-like closeness that apparently makes this form of Clover feel “safe.”

This is the one who is the polar opposite of the Bumper Rider. This Clover will keep at least an eighth of a mile between itself and a school bus ahead. If there is a “work zone” – even if it’s obvious there’s no work being done, just cones stretching into the distance as far as the eye can see – this Clover will crawl. It may even put its blinkers on. In winter, this Clover is notorious for its failure to comprehend the concept of momentum and its application to uphill grades. It will brake at the beginning of a hill –  or stop at the top (assuming he makes it to the top) with the usual result that everyone trying to make it up the hill behind the Clover doesn’t because they were unable to maintain enough momentum to do so. This Clover will also turn purple in apoplectic fury when it is passed.

Which brings us to… .

This Clover will not pass a bicyclist until the Clover can use at least half of the oncoming traffic lane to create a “safe” envelope of space for itself. Since the oncoming lane is often full of oncoming traffic, it may take 10 or 15 minutes before the Clover feels it’s “safe” enough to attempt a pass. Meanwhile the Clover  – and everyone stuck behind the Clover – will get to enjoy the scenery as they all plod along at the speed of the cyclist leading the line. This form of Clover is also known for its refusal to pass garbage trucks that stop at every driveway, the mailman who stops at every mailbox and always slowing to 25 MPH half a mile before every school zone, even when it’s Sunday afternoon and there isn’t a kiddie in sight.

Some things do not improve with age, Clovers being a case in point. Start with a marginal middle-aged driver with many or all of the characteristics described above. Now add 30 years of physical and mental decline. Viola! The uber Clover. By turns oblivious and obstreperous, this Clover is a true menace. He blows through lights he “didn’t see” or wanders across the double yellow, side-swiping your car – but is treated kindly by the system because he’s old and reckless rather drunk and reckless. For this Clover, age-related deterioration is an entitlement. This decrepit old Clover will belligerently resist every call to hang up the keys until it takes  that final ride through a plate glass window and straight into the Slurpee machines. Even then, Old Clover will probably  insist that “the gas pedal just stuck.”