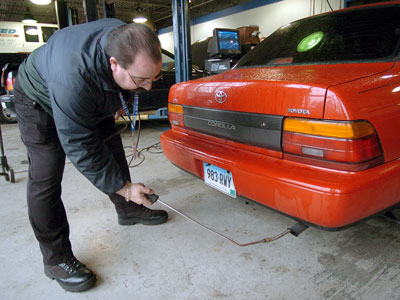 You know that “check engine” light on your dashboard? What if instead of just telling you that the car’s computer has detected some fault with the emissions control system, it told the government – via roadside readers and satellite uplinks?

It’s called OBD III – and it’s right around the corner.

All new cars builtsince the mid-1990s have OBD II – or On Board Diagnostics II. This system standardized diagnostics by specifying that every new car come equipped with an OBD port (usually located somewhere near the driver’s side kick panel, on the underside of the dashboard) into which a technician (and your state’s emissions test station) can plug a scanner that downloads stored “trouble codes.” It is these trouble codes that also trigger the yellow “check engine” malfunction indicator light on your dash.

Mostly, these codes involve problems with the emissions control system rather than the engine itself. They’re often intermittent and minor. This is why it’s possible to continue driving the car with the “check engine” light on and everything still seems ok. 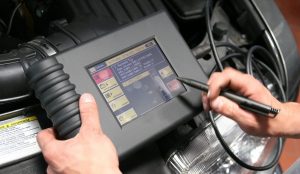 And it’s why the Power That Be want OBD III.

In the words of the Specialty Equipment Manufacturer’s Association (SEMA), the vast umbrella organization representing automotive industry parts and equipment suppliers, OBD III is “A program to minimize the delay between detection of an emissions malfunction by the OBD-II system and repair of the vehicle.”

And how will that be accomplished? Rather than merely store trouble codes, OBDII will immediately transmit those trouble codes to The Man – who will then proceed to first warn you (via letter or e-mail) to have the car repaired, stepping up to more aggressive enforcement if you fail to do so in the form of “citations… court and/or DMV penalty at next registration.”

It would also be possible to send the info directly to any nearby cop, who would then pull you over immediately – saving the government some time while making some more money off motorists.

This is not sci-fi. It’s impending reality. All the technical issues have been solved. Most new cars already come with GPS systems capable of receiving and sending data. It would be a simple matter to salt the roads with scanners capable of ID’ing every car that passes by, automatically establishing a communications link with your car’s computer. This would occur continuously and constantly, too – not just every once-in-a-while. OBD III as envisioned would literally make it possible to constantly monitor and record every vehicle so equipped, from the moment it left the driveway to the moment it returned at night.

Here it is, straight from the horse’s mouth – the California Air Resources Board (CARB) which sets the trend for what inevitably becomes national when it comes to emissions rigmarole:

“If the inspection process could be automated through the use of transponder-assisted on-board diagnostic systems (in what could become an OBD-III requirement or program), the process could be made less costly and time-consuming.. ” (Italics added.)

If it comes to pass, OBD III will be the keystone that assures the end of any expectation of privacy behind the wheel (in addition to everywhere else) and it will also obviate the quaint notion that it’s your car – and hence, private property. Hence, hands off. SEMA’s fact sheet about OBD III notes this directly, stating that OBD III would impose what amounts to “sanctions based on ‘suspicionless mass surveillance’ of private property” and would also be “random,” with the actual monitoring taking place before the computer throws any codes – and so, bereft of probable cause and thus a pretty clear violation of the Fourth Amendment.

But, the Fourth Amendment is already a dead letter. It has been trumped – trampled – numerous times, on the basis of generalized, potential “threats” – everything from potential drunks (which now means anyone who happens to be behind the wheel on a public road) to potential polluters, whose cars might be emitting more than the allowable maximum amount of fumes (or even just CO2).

That’s how it will shake out, rest assured.

And it gets better, too.

If it becomes The Law that all new cars must be equipped with scannable OBD III, then what about older cars without OBD at all?

Here is the backdoor that will be used to effectively outlaw older cars, including antique cars – but also just older late-model cars. They won’t be prohibited outright, probably. Rather, they will be prohibited from being used for everyday transportation. You’ll be allowed to keep your pre-OBD III car. You just won;t be allowed to drive it – except, perhaps, to the occasional old car show.

Or they may just require that all pre-OBD III cars be “retired” after a certain period – and then rendered inoperable by having their engines filled with silica or some such, a la Cash for Clunkers.

In this way, everyone will be forced into the system of mass control/mass surveillance. It has been a source of frustration in certain quarters that it’s still possible for the average citizen to drive a car built before catalytic converters and computers (and air bags and all the rest of it) became mandatory or de facto mandatory. There are dangerous asocial types out there who prefer such cars, which are paid-for, simpler and can often be kept running for years for next to nothing. That annoys both the TPTB – and probably also the car industry, which wants you in a new car, not a paid-for older car. The big combines will be among the most ardent proponents not merely of OBD III – but that cars without OBD III be “retired.” 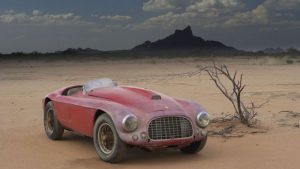 The same arguments used to justify all the other gang bangs of the Fourth Amendment will be trotted out: We must protect the “safety” of the public – a public that increasingly becomes supine and moist at the mere mention of the Pavlovian cue word, safety.

And it will be impossible to argue against, because the essential argument has already been conceded. We have no individual rights worth discussing – and hence, no rights to either privacy or property that may not be set aside at any moment by some broadly asserted collective interest – as defined by the small minority that operates the collective.

When I was kid in the ’70s I liked the rock band, Rush. One song in particular, titled Red Barchetta – in honor of one of the first Ferrari street cars. The song was about a bleak future time, after a Motor Law banning private cars had been passed.

That future is just about here, unfortunately.