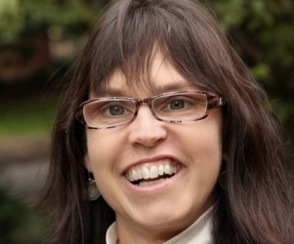 The climate change professor at the center of the scandal over her assertion that global warming skeptics were akin to racists and should be “treated” for having a psychiatric disorder wrote a letter in which she praised Barack Obama for hiring eugenicist John P. Holdren as his chief science advisor, while also urging Obama to ignore public opinion and disregard democracy in favor of enforcing draconian climate change mandates.

Following University of Oregon Professor Kari Norgaard’s presentation of a discussion document at the recent Planet Under Pressure conference, in which she called for global warming skeptics to be viewed as racists who need to be “treated” for mental disorders, every academic establishment associated with her has attempted to memory hole information concerning Norgaard’s biography and her previous work.

As the Watts Up With That blog documents, the University of Oregon has attempted to re-write history Soviet-style by amending the controversial terms used in Norgaard’s paper without so much as an editor’s note.

However, a damning letter written by Norgaard which appears on the Whitman College Magazine website has not yet been erased. In the letter, Norgaard praises Barack Obama for making an “excellent choice” in hiring John P. Holdren, whom she inaccurately describes as a “Nobel Peace Prize winner”.

As we have exhaustively documented, Holdren is an avowed eugenicist who in his 1977 book Ecoscience called for a “planetary regime” to carry out forced abortions and mandatory sterilization procedures, as well as drugging the water supply, in an effort to cull the human surplus.

“Please listen to Holdren and Hansen,” writes Norgaard, referring to prominent NASA global warming alarmist and Al Gore ally Dr. James Hansen, the man who endorsed a book by fellow alarmist Keith Farnish which advocated acts of sabotage and environmental terrorism in blowing up dams and demolishing cities in order to return the planet to the agrarian age.

“Policymakers should not wait for public opinion to take necessary action,” she writes, adding, “Public opinion does matter in a democracy, but this is a time when following it would be a serious mistake.”

Norgaard’s plea to Obama to act like a dictator in enforcing the climate agenda bears resemblance to ‘Gaia hypothesis’ creator James Lovelock’s 2010 assertion that “democracy must be put on hold” to combat global warming and that “a few people with authority” should be allowed to run the planet because people were too stupid to be allowed to steer their own destinies.

Norgaard concludes the letter by calling on Obama to completely eliminate the coal power industry with an “immediate phaseout of coal,” rhetoric which echoes Obama’s 2008 promise to “bankrupt” the coal industry.

The letter confirms Norgaard to be a dangerous environmental extremist with a total contempt for freedom, both advocating that Obama disregard the will of the people he is supposed to represent, while also endorsing the likes of Holdren and Hansen who have advocated the most obscenely tyrannical measures in the name of saving the planet.

The fact that there is a blatant effort on behalf of the academic establishment to distance itself from Norgaard, with information about her being deleted from University websites, illustrates how the climate change alarmist movement is none too keen on having Norgaard’s ideas receive too much public attention. Indeed, You Tube is now deleting videos that contain criticism of Norgaard in response to frivolous complaints.

This whole episode again underscores the fact that if you scratch beneath the surface of the rhetoric coming from global warming alarmists, you encounter some of the most offensive, despotic and downright dangerous ideology from people in positions of power that society has faced for decades.