One of the problems with “safety” laws is they amount to someone else’s cost-benefit analysis. Someone else’s favoring of more this vs. less of that. Someone else’ determination that the Pros outweigh the Cons – as they define them. 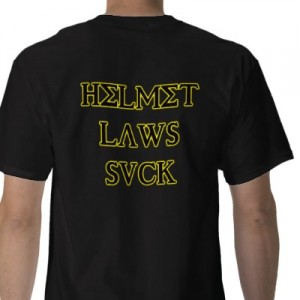 The practical argument is they reduce head trauma in the event the biker goes down – which is certainly true. This can’t be argued. But there is another side of the coin to consider: Not wearing a helmet may make the biker less likely to go down in the first place – and it’s just as certainly true.

The helmet-less rider can hear what is going on around him. The external world is not muffled by the helmet. This is an inherent safety advantage. For example, the rider will hear a snarling, barking dog about to try to bite his ankle much sooner than he would with a helmet on. Thus, he will be less surprised by said snarling dog – and so, less likely to be startled, lose his balance – and wreck. Just one example. There are many others.

If you don’t ride yourself and doubt that not being able to hear clearly is an issue, try driving your car around with ear plugs in sometime – which by the way is illegal, precisely because it is so unsafe. But apparently, it’s ok to put a biker’s life in jeopardy this way, because of the determination by some other person that wearing a helmet is more safe.

Even more of an advantage is the much wider field of vision that a rider without a helmet enjoys. With a full-face helmet on, the rider’s peripheral vision is significantly limited. You don’t see much to the side unless you turn your head to the side (which means you’re not able to look ahead of you while you’re doing it). But most of the things that result in a rider being killed involve things coming at the motorcycle rider from the side – such as someone in a car running a red light or a car turning into his lane because the bike is in the car driver’s blind spot (or the driver of the car is just oblivious). That extra fraction of a second’s awareness can be the difference between going down and not going down – and between life or death. 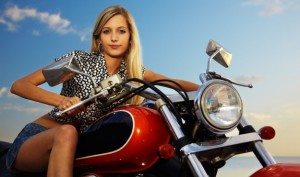 The point being, it’s not one-size-fits-all. Almost any “safety” device involves compromising something in return for the (supposed) enhancement – or exposing you to some other risk that didn’t exist previously.

Yes, they have saved lives – just as helmets have saved lives. But it’s also a fact that air bags have taken lives. Not many, granted – but nonetheless. There is also a very real risk of serious injury – stuff like broken wrists , face burns and detached retinas. It is serious business – and it begs a very serious question:

Why shouldn’t the decision be yours? Is it not your life that hangs in the balance?

It takes a stupendous degree of arrogance – arrogance on a Louis XVII scale  – to assert that one has any business making such a call on behalf of someone else – who is not also a minor child. Are we not grown adults fully capable of weighing costs vs. benefits, pros  vs. cons? What sort of person would interpose himself between another adult and his right as an adult to perform such calculations for himself? 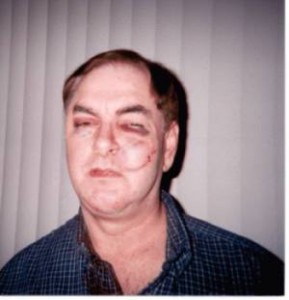 I personally prefer not to infantilize my fellow man – just on principle – much less take on the moral responsibility for events that may happen to him as a result of some decision made by me. I’d need years of therapy if, for example, I was the person responsible for imposing the air bag mandate and discovered later on that some nice old lady (several, actually) had been killed by one of the things – or had her retina detached. The fact that the bags “saved” other lives is beside the point. None of these lives are mine to play with. I don’t see it as my role in life to play God. That sort of attitude requires a degree of narcissism – of undiagnosed  psychopathy – I thankfully don’t possess.

But our rulers possess it in abundance. It is their defining characteristic. They feel no compunction whatever about forcing us to do what they think best. Of expsoing us to risks they deem minimal or acceptable in order to achieve some greater good they consider desirable.  They are not troubled by cost-benefit analysis tabulated in blood and guts… other people’s blood and guts. We are mere widgets on a game board, abstract statistics to be manipulated and experimented upon.

They decree – we obey.

Even if it kills us.

What They Never Mention