People vote for too many things. 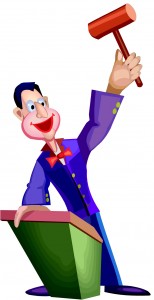 Mostly they vote to take things from other people – either their property or their freedom of action. Each election in modern America is for all practical purposes a no-reserve auction of other people’s stuff. Vote for me, says The Candidate – and I will give you some of their stuff. Or something even worse: Vote for me and I  will force them to do This or That.

It is never phrased quite so honestly, but this is the essential character of what goes on. Everything is up for bid. There is no off-limits. No “not for sale at any price.”

Apparently, the idea doesn’t appeal to most Americans anymore. Most Americans view their fellow man with proprietary interest.

But the vote is just a mechanism. A tool. It is neither good nor bad in itself. It is people who are bad. Envious, malicious, vengeful, controlling people. Or simply ignorant people. Give them the franchise and nature will take its course.

Envious, malicious people vote for wealth transfers to themselves – theft by process, rendered lawful. You have more and I have less. Give me more.

Voters with the itch to control their fellow man – but lacking the courage to do so directly – get proxies to do it for them, via the ballot box. It makes them feel good without requiring them to confront the nature of the thing – and of themselves. People who would never in a million years march over to their neighbor’s house and knock a cigarette from his lips will self-satisfiedly vote to have someone else do it for them – never stopping to consider that they have just given license for their neighbor to exact revenge using precisely the same method.

The simply ignorant, in their naivety, vote for laws that seem to them humane and “liberal”- never following the sequence of events down the line, to the unfriendly end of the gun that will impose their “humane” and “liberal” policies. Or, if they are “conservatives,” for laws they may  genuinely believe will “keep us safe.” Likewise never following the thought-chain to its necessary conclusion. Never realizing what they’ve just endorsed and how it will inevitably be used in ways they may not like very much at all.

But the franchise is  itself  morally neutral.  Like a gun. A gun can save a life – or take one. The gun itself is neither good nor bad.  It is the hand that wields it – and the mind that controls it.

And it is the minds of millions of Americans that’s at the root of our predicament. Minds that have been molded (twisted) by great historical forces, embodied by a few very specific persons:

Abe Lincoln taught Americans to fear the government. He laid waste to the South as an object lesson: Washington’s authority is unassailable – and eternal. The union, at bayonet-point, forever. Like a bad marriage from which there can be no escape save death.

Prior to the war, most Americans still held to the curious notion that government existed by their leave. It was their mere representative, charged with a few specific tasks and no more. When this representative exceeded its mandate, it became immediately illegitimate – a tyranny. The Southern states took this literally, attempting to withdraw on the principle that legitimate government exists by consent only – and what was being done to them by the rapidly growing Leviathan in DC was being done manifestly without their consent and very much against their will. Hence, they exercised their right as sovereign states to withhold consent – and to sever the relationship. To depart.

The principle of unlimited federal supremacy was established at Appomatox. The formerly sovereign states (plural) became little more than fiefdoms ultimately owned – because utterly controlled – by the “monarch” in Washington. The formerly free people of the several states became citizen-subjects of the United States (singular) –  subject to its universal authority. Oh, they were allowed to vote. But never given a choice.

Millions of Americans, though beaten on the field, still denied the right of Washington’s rule in their hearts – where they remained free in spirit, at least. They  resented the new massa in Washington – regarding him (rightly) as a usurper, a tyrant, a fiend. It was understood they were ruled by force – and very much without their consent. 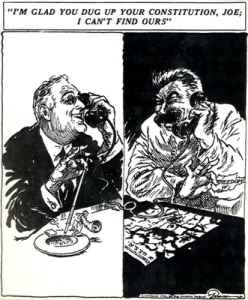 Roughly four score and seven years later came FDR – and another pivotal moment in the changing (the warping) of the American mind. FDR taught browbeaten Americans to love the government. To look upon it as a benevolent source of Manna (source of the Manna always left unspoken). Hard times? Bad luck? Washington can “help.” Over the ensuing decades, this became institutionalized – leading us to the present debacle of annual, every other year and every fourth  year auctions presided over by the most loathsome characters imaginable – politicians – made possible by an increasingly loathsome – because degenerated – mob.

Up for bidding: The property of your fellow man – including even his physical person. And as he bids on you, you in your turn bid on him.

The auctioneer, meanwhile, collects his commission.

Until enough people to make a difference recover their moral sense – and decline to partake – these auctions will continue. More, they will increase in rapacity as the crowd loses all scruple and demands everything – which it inevitably will. Because nothing is off the table. Then, of course, there will be nothing. At least, not for the screeching crowd. Everything will have been consumed – and not one of them will have a rightful reason to complain. He who victimizes cannot object to being victimized in turn.

And the auctioneer? He’ll end up owning everything – including you and me.

One of Clover’s Blue Suited Heroes….