Some friends have been actively talking about their Exit Plans – about getting out of this country before the curtain goes down. While there is still time. They believe the situation to be hopeless. That despite the upwelling of liberty-mindedness among some, the vast majority of Americans are not liberty-minded. That Americans – tens of millions of them – are stupid, unreachable, mean, irrational, authoritarian-minded Babbits and poltroons. People who always speak in “we” – and lust to control others. 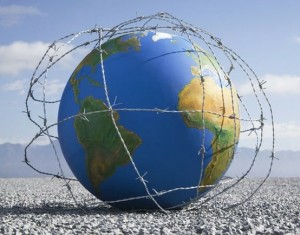 Reluctantly, I have to concede the point.

I have had exhaustive (and exhausting) conversations with countless people – some of them probably a lot smarter than I in terms of raw IQ – who just can’t connect the dots.

The problem is as much psychological as it is intellectual. There may just be a defective sub-species of human being, homo servilus, who – much like a bee in a hive – is programmed to crave the collective and therefore accepts its corollary – coercion – as the natural and right order of things.

It’s very easy to get these “bees” to reveal their true natures. Their core antipathy to individualism – and its corollary, liberty. Just let them know, for example, that you find sports/celebrity worship disgusting. Or that you don’t subscribe to any particular religious doctrine – or much care what doctrines others subscribe to, so long as they leave you be.

Let them discover that you don’t feel obliged to pay more taxes for “our children” – only an obligation to take care of your own children. Criticize war.

So, I don’t disagree that jumping ship is probably a smart move. Nonetheless, I’m reluctant to leave the country, for many reasons – high among them just orneriness. This is my country, dammit. I hate the idea of just giving it to … them.

That said, I am beginning to wish I’d “gone deep” when I selected our fallback redoubt. We consciously moved to very rural SW Va. from the Northern Virginia area (near DC) about eight years ago to a great extent to limit our exposure to what’s surely coming. But I am thinking now that we would have been smarter to have moved to rural Idaho or Wyoming or Montana (like Chuck Baldwin did) instead. There are too many Clovers here.

And signs of sprouting continue to worry me.

For example: Several recent “letters to the editor” in our small community newspaper go on and on about how “we” need to raise taxes on real estate so that “our schools” will have “adequate funding.” There is one school – an elementary school in a far corner of the county – threatened with closure because of limited “revenue” and not enough students to justify keeping it open. So the idea was floated to close it and consolidate it with another. “The children” would then get bussed a little farther to their new school. This is an outrage to the parentsites of these children, who believe others should be compelled to provide the necessary “revenue” to keep the old school open for their children.

Everything discussed in terms of “we,” of course. It’s never my children need you to pay for their school.

If I were to speak at a public hearing about this and ask why don’t people who chose to have children bear the responsibility for raising their kids – which includes educating their kids – as opposed to their kids becoming an open-ended claim on the property – on the liberty – of other people who had nothing to do with it… I’d likely be the victim of a mob beating. At minimum, I’d become a community pariah – regarded as “selfish” and “anti-child” (as well as “anti-education”) … because I am troubled by armed men threatening to kill me and take my property so that it may be given to someone else’s kids – kids I’ve never even met let alone had anything to do with bringing into this world. It is no defense, either, that such a policy makes it that much harder for people who’d like to pay their own way to do so. 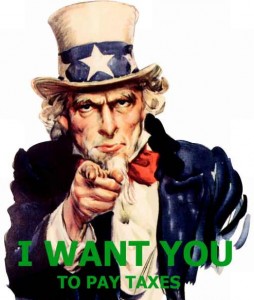 It never occurs to these “freedom loving” Americans that freedom can’t exist when you are no longer free to say no to being forced to hand over your rightful property to other people to whom you properly speaking owe nothing – other than goodwill. That if “the children” becomes a justification for theft, then any other reason is just as good a reason.

But don’t dare say it out loud…. these freedom-loving Americans will very quickly show you just how much they actually believe in freedom… including even the freedom to speak your mind, if your mind differs in any meaningful respect from  the parameters of orthodoxical Republican or Democrat parameters.

The only cardinal sin is to commit non-authoritarianism. To state that you don’t want anything from anyone except their respect for your rights – and are willing to extend the same courtesy in return.

It is a thought increasingly foreign to Americans – even here, in a rural southern farming county 35 miles from anything in most places and often a lot farther than that. 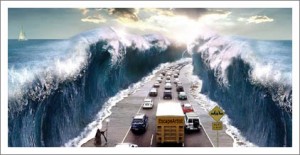 In our tiny, literally on-stoplight county, the same government that moans about not having sufficient “revenue” for “the children” recently spent probably several thousand dollars painting at least six “pedestrian crosswalks” in town, complete with “safety man” icons imprinted into the pavement plus signage. Apparently, people cannot cross the street unaided here, either. I have no doubt that tickets for jaywalking are right around the corner. Tazerings for the non-compliant.

Signs of the apocalypse.

There is talk of writing zoning laws – which this county has never had – and which will surely mean The End of everything that made moving here worth doing. People will no longer just be able to freely buy and sell their land, to be used however the new owner wishes. There will instead be restrictions on how a lot can subdivided – and what may be “lawfully” constructed on said lot. I can already see a time when BTK-type “zoning enforcement officers” will be knocking on people’s doors, threatening them with onerous fines (and ultimately, county seizure and auction of “their” land) if they don’t mow it, or have too many cars parked on it or a “not approved” shed built upon it… .

Clovers. The god-damn bastards are here now, too.

It only took them eight years to find this place – and ruin it.

It’s entirely possible that nowhere in North America is a safe redoubt.

What happens, ultimately, depends on the character of the people. And the character of the American people – by and large – is one that reflexively defers to authority – willingly, worshipfully. That happily submits to the most despicable degradation if it will “keep them safe.” And which never fails to speak in terms of we.

So, where do the rest of us – the remnant that still believes in I – go to get away from we?

That, friends, is the question of our time.