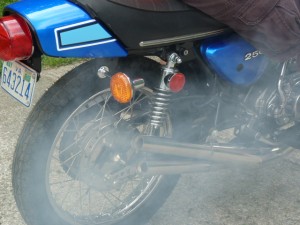 At last, almost one year after the $50 hulk was hauled into the garage, the ’75 Kawasaki S1C “triple” is fully armed and operational.(For the “before” pics, see here.)

If you’ve been following this series, you’ll recall that in the last installment, I mentioned I was done except for the pipes – a set of high-performance chambered pipes to replace the (clogged, rusted-out) originals. I bought these from Higgspeed Performance in Britain. Higgspeed specializes in old two-strokes, Kaws and others – and supplied me with a set of absolutely gorgeous pipes to complete my restoration. Of course, these are not stock, but they are in keeping with the spirit of ’75 – when installing chambered pipes (Dencos especially) was the first thing many new triple owners did to their bikes. The factory pipes were notoriously heavy and also restrictive, so by adding a set of Dencos (or similar) you got the two-fer of reduced weight and more performance out of bikes that already ran like raped apes right off the showroom floor.

If you don’t know triple two-strokes, know this: A given two-stroke engine will produce about twice the output of a four-stroke the same size. So, a 250 cc unit like mine – which puts out about 30 hp, stock – is about as powerful as a typical 450-500 cc four-stroke.

And much, much more obnoxious. 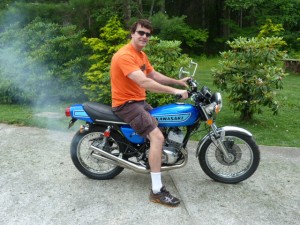 The brimstone crackle and spitting that emanates from the S1’s triple exhaust pipes is like Satan’s own mood organ. Sulfurous smells of internal combustion accompany the racket. A cloud of bluish haze envelops you. Even at idle, the mean little SOB makes more noise than any of my other bikes – all my others bikes combined. Twist your wrist and the weedwhacker fury rises to a ferocious pitch, each pipe intemittently pulsing grossly uncontrolled exhaust so freely the sight of it would give Al Gore a stroke.

Now, to do some wheelies in front of his house… .

With the Higgspeed chambered pipes came new main jets – number 80s vs. the stock 75s. This is important. Gotta make sure the fuel flows copiously so as not to risk a lean-out, the one thing that will kill a two-stroke even faster than the EPA.

Speaking of which: Right now, as you’ll see in the pictures, I have aftermarket individual “pod” air cleaners on the carburetors. This is temporary. I am restoring the stock air box and plan to install it by next weekend. It will take some work – and some hunting. Original air cleaner elements are not easy to find and the rubber boots that connect the carbs to the steel air box needed some TLC. So, why not keep the pods? The truth, apparently, is that these old triples tend to run better – read, less erratically and less prone to holing a piston because of a lean-out condition – with the factory air box in place. Plus, I’m lucky enough to have all the parts – often, these got lost over the years – and I figure it will make the bike more like it was, circa ’75. 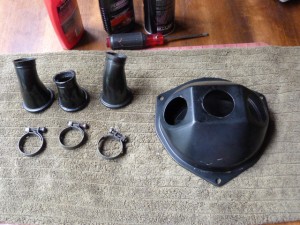 So, except for the Higgspeed pipes, the bike is restored to as it was. That includes the old-timey points ignition – three points, three condensors and three individual timing markers to line up. The triple is basically three singles riding a common crank. Ditto the carbs, which have to be individually adjusted – then synced to work together. In addition to the throttle slides, there is also a cold start plunger on each carb, connected (eventually) to a common cable that leads to a switch on the left handlebar. It’s not a choke, properly speaking, but it serves the same purpose. Making the adjustments is actually pretty easy. The factory Kaw manual is very helpful here.

But there was one area where it was not helpful at all – and it’s why it took me a few extra unanticipated weeks to get to this final installment – and get the bike running.

Everything (except the pipes) was done about a month ago. Then the pipes came. I immediately installed them, lusting to hear the resurrected sounds of my little stinker. Fuel tap on, starter plunger engaged… kick…. freewheel!

The kicker was not engaging. 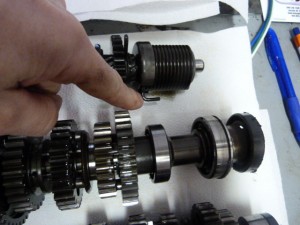 Puzzled, I fiddled. I removed the side cover to see what I could see. Through a window in the case I saw the starter gear on its shaft. As the kicker lever is rotated, this gear moves forward, meshing with the big gear on the clutch basket, thus rotating the assembly and causing the bike to start. Only my gear was not quite meshing. It seemed to want to, but didn’t get there all the way. I could get a partial engagement, if I rotated the mechanism by hand, carefully. Of course, this wasn’t going to work. The S series bikes do not have electric start, so if you want to start the bike, you need a working kicker. And the only way to get at the kicker to fix it is to pull the engine and split the cases. 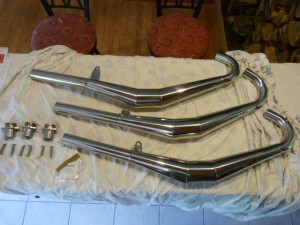 So, off came the newly installed pipes – and everything else, too. Back on the bench, the cases open once more, I tried to figure out what I’d missed. Everything looked right. The kicker shaft was seated correctly, the tang in the lower case and the tensioner spring “L” tab secured. I consulted the factory shop manual. No help. So I consulted my friend Graves – ace mechanic and old bike freak like me. We took the entire kicker assembly apart and closely examined every piece of it. All seemed in order – but I was not confident enough to put it all back together (again) and then have to take it all apart (again). Cleaning Kawsaki-Bond off the case surfaces is not my idea of a party.

Then, I did some board surfing. And I found my needle in a haystack. Though the Kaw factory manual does not mention it, the circlip-like ring that rides on the kicker shaft – and which helps to push the gear to mesh with the clutch basket gear – sometimes loses tension. In which case, the gear won’t mesh positively (or at all). The fix is to gently squeeze the  thing so as to restore the tension. El fixo! The kicker gear meshed properly – and now I could put the thing back together (and back into the bike) with confidence.

An hour or so later and the Moment had arrived. I ought to mention here that I pre-mixed the gas with two-stroke oil, even though the S series bikes have an oil injection system (Superlube). Reason? A fail-safe. It is always possible that the factory oil pump may not work – or not work right – upon start-up. If that happens, you might very well melt/seize/ruin your just-rebuilt engine. By feeding it pre-mix, you eliminate this concern. The bike will smoke even more heavily than it otherwise would, of course – but isn’t that part of the fun? 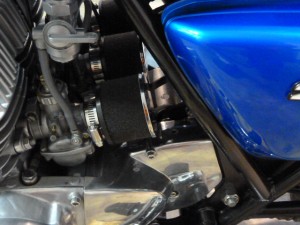 The main thing is you won’t have to worry about a catastrophic failure – and you can safely check the function of the Superlube oil pump with the engine running. This is done by visually confirming oil delivery through the three clear plastic feed tubes that come off the pump and run to each of the bike’s three cylinders. By manually holding open the pump lever arm, you can bleed out any trapped air. Once all signs of air bubbles are gone you can feel confident that the engine is receiving the oil it needs. However, there are some who still like to add some oil to their gas – just in case.

The Superlube system does not have any warning mechanism built in. So if for whatever reason it stops working while the engine is running, you may not have any idea until major damage has already occurred. By mixing some two-stroke oil with the gas, you eliminate that potential problem. Just be aware the bike will smoke more (hooray!) and you’ll probably need to clean/change plugs even more frequently. For me, it’s not an issue – because this bike is just for fun – not an everyday rider or long-trip machine. 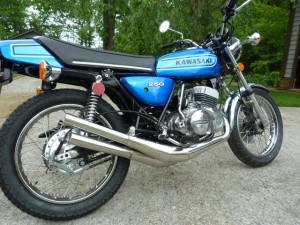 I still need to get my seat recovered – it looks ok in the pictures, but it’s covertly electric-taped in several places to hide the tears. I also need to get the neutral switch light adjusted (works sometimes) and get the original air box presentable, functional – and reinstalled. But other than these few details, the bike’s complete at last. It’s been  – well, I won’t  say entirely fun. The kicker issue damn near drove me to tears. But overall, I had a good time.

And I expect to have an even better time howling around the neighborhood on this angry little demon!