Having a generator for back-up power is great – unless you don’t have the fuel to run the generator. The irony of the portable back-up generator – most of them, at least – is that they run on gas. And what’s the item that’s usually hard to get when the power’s down? 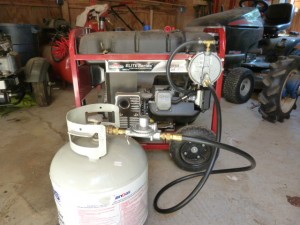 About two weeks ago, a violent storm line called a derecho passed through our area; thousands of people lost power – not for a few hours, but in some cases, for a week or more. The lines queued up real fast at local gas stations – the ones with still-operable pumps, anyhow. You could not even buy a portable five gallon (or 1 gallon) gas jug at any Lowes or Home Depot in the area.

Many people had generators. But sometimes, they couldn’t get gas for them. Which meant they might as well not have had the generator, for all the good it did them.

And this was just a relatively minor (and known-to-be-temporary) situation. Imagine a more serious – and longer-term – SHTF-type of scenario. Just when you need gas the most – so will everyone else.

Which means you probably won’t get any gas. 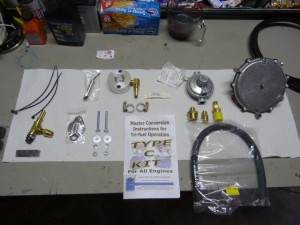 Well, you could store up some gas. I’ve done that myself. One problem with that idea is that gas – especially ethanol-adulterated “gas,” which is in fact 10 percent alcohol – does not store well, even with fuel stabilizer added and even if you keep the stuff in a sealed container kept in a dark and fairly cool place. Three months or so at the outside is the longest you probably want to leave gas just sitting around. After that, you risk bad gas – and a gummed-up carburetor in your generator. Which means it might not run.

Which means – once again – you won’t have power.

That’s why I converted our generator to operate on multiple fuels – gasoline, propane and natural gas. This has several advantages, functionally as well as practically speaking.

The obvious one is I am not entirely dependent on gasoline for back-up power. If the juice goes out for a couple of days – or longer – I don’t have to worry about queuing up with everyone else down at the gas station – and hope the gas station’s open.

I keep about 100 pounds of propane in storage – enough to operate the essentials (most especially the well pump, so we have drinking water) for weeks. A month or two, if need be – if I limit the time the generator runs to a couple of hours per day. 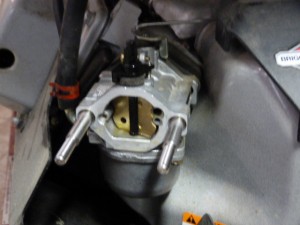 If your home already has a large propane tank – or even better, a natural gas hook-up – you could run  a generator almost indefinitely. Or at least, for a long time. Long enough, probably, to make it through all but complete SHTF-type scenarios.

This is peace of mind gasoline cannot provide.

Propane/CNG also stores indefinitely – or practically indefinitely. A portable 20 pound tank will be as good a year from now as it is today, provided you keep the valve from rusting up. Assuming you keep the tank in a reasonably well-protected environment such as an enclosed shed or in a garage, the fuel itself will last for years. So, no hassles keeping track of when you bought your fuel – or how old it is – and whether it’s time to run the stuff through your weed-whacker, just to get rid of it. Buy a few 20 pound (grille-size) tanks – about $40 new; much less to get a refill – or one of the large 100 pound cylinders. Whatever works best for you – and you’re set. It’s like having long-term storable food: One less thing to worry about.

Propane (and natural gas) also burns more cleanly – which will extend the life of your generator’s engine as well as increase replacement intervals for spark plugs and oil. That’ll save you some cash over time. 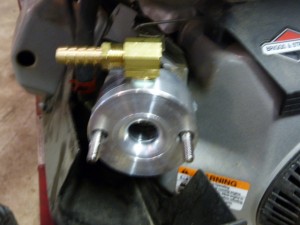 There’s another money issue, too:

Gas – even now – is still pretty expensive. If you find yourself in a situation where it’s necessary to rely on gasoline to run your generator for an extended period, the dollars add up quickly. The typical portable generator has a five gallon tank, which will run the unit for about 10 hours or so under a full electric load.  At $3 per gallon – current prices – that’s about $15 a day to run the generator. If you have to run it for two weeks, you’ll be spending more than $200 to keep the lights on – and the food in your ‘fridge from spoiling. At $4 or $5 a gallon, it gets harder to keep the lights on.

Propane – and CNG – are not only cheaper on a per-gallon-equivalent basis, they’re not as subject to sudden price increases because there are vast reserves of the stuff right here in the USA. Plus, you can stock up now – at current (low) prices – and not sweat future (inflation-driven) price spikes as much. Because there’s no worry about the fuel going bad in three or four months’ time.

Buy now, use later – even if  “later” is several years from now. 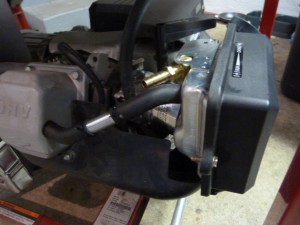 I just finished doing the install – and thought I’d share the experience.

It’s a pretty straightforward deal. The kit contains an aluminum adapter block you install in between the air cleaner and carburetor. This will feed the propane or natural gas to the engine. Installing the adapter is not mechanically challenging and can be handled by anyone with basic hand tools (socket set, screwdrivers, pliers, drill) and the ability to carefully read and follow some simple directions. Basically, you remove the air cleaner housing, slide the adapter in place, then reinstall the filter housing. You may need to install stud extenders (provided) but this, too, is easily done.

On the adapter is a threaded 90 degree elbow with a a barbed fitting. This is the propane/natural gas feed to the engine. A hose (also provided) runs from here to the regulator – the main piece of hardware that comes with the kit. You mount the regulator on the frame of the generator by drilling a couple of holes and using the supplied bolts, which thread through bosses built into the sides of the regulator. 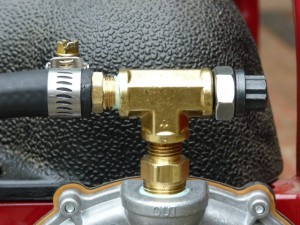 On top of the regulator is another fitting – called the load block. This is used to meter the amount of fuel fed to the engine. You make adjustments by turning the bolt in (less fuel) or out (more fuel) to accommodate the needs of your particular engine. Large engines will use more fuel  – and so on.

On the bottom of the regulator is a large threaded fitting – this is how you connect the works to your fuel supply, either propane or natural gas. Now you’re ready to rock. Or at least, not be left in the dark!

The really neat thing about the kit is that once installed, you can easily switch from one fuel to another. To run on gas, just turn in the bolt on the load block all the way (to close off any openings and prevent vacuum leaks) cap off the propane /gas inlet – and operate the generator as you normally would when burning gas. Turn the fuel tap on, start ‘er up – and there you go. The generator will run the same as it did before. The kit does not interfere with the factory choke mechanism and the adapter block does not affect the way the engine runs when it is running on gasoline.

To switch over to propane (or natural gas) simply turn the gasoline fuel tap to “off” position and allow the engine to run until it runs out of gas. Now you can turn on the feed supply for the propane or natural gas. Open up the load block the appropriate number of turns for your engine (tuning instructions are provided with the kit) and – if necessary – push the primer button on the back of the regulator (this performs the same function as the choke when the unit is running on gasoline). Start the engine – and you’re good to go. 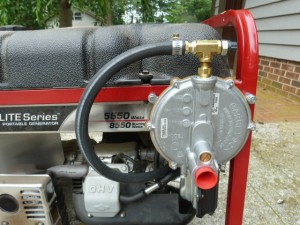 As mentioned above, if you’re lucky enough to have a big propane tank (the type used to run fireplace logs and so on) or have a CNG line plumbed to your house you won’t even have to hassle with getting the smaller, portable tanks like the ones I use. Just be sure the hook-ups are right – including the diameter of all fittings and the integrity of all the lines. You may want to consult with a professional to get your lines (and flow rates) set up exactly right. The US carb people also have a tech line and are great when it comes to helping you get up and running.

This conversion, to my way of thinking, is one of those “preps” that’s also very practical. It’s something that will be for-sure useful – not merely just in case useful … and something you may never need. Even if the S does not H the F, someday, the power will go out – and even if it comes back on again in a couple of days, gasoline might be scarce in the meanwhile.

But if you’ve got the ability to run your rig on fuels other than gasoline, you’re a leg up on the problem before the power even goes out.