Getting a flat tire is less commonplace than it used to be – mainly because tires are built better today than they used to be. But flats still happen – because no matter how well-built a tire may be, it can still be punctured (and lose air) if you run over a roofing nail, or get a dangerous sidewall bulge after you hit a particularly bad pothole. 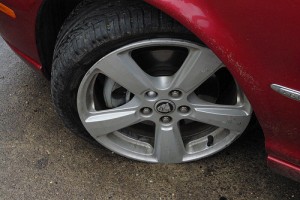 What has changed is that changing a tire is often not as easy as it used to be.

Here are a few important things to know – and in particular, things not to do – when you find yourself dealing with a flat:

* Be absolutely certain about your jacking point –

Most new cars are unibody cars, meaning the body and frame are welded together during manufacturer as a single assembly. In the past, the vehicle’s frame – the structural part of the car – was pretty obvious. It’s not as obvious in a modern unibody car. If you’re not careful and place the jack under a non-structural part of the car not capable of supporting the car’s weight as you raise the jack, you could end up causing expensive damage to the car.

Most car owner’s manuals will show you with pictures or diagrams exactly where to place the jack; sometimes there is even a cut-out designed specifically to fit the factory jack, so it’s harder to get it wrong. The important thing is to be sure before you start to jack up the car. If you don’t have an owner’s manual for your vehicle, get one. 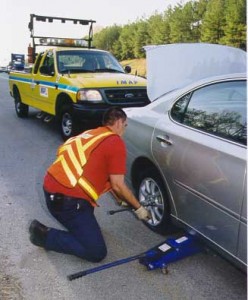 In the past, most cars came with fairly sturdy jacking equipment. This was back when most cars had huge trunks with plenty of extra room – and no one cared about the weight of the car because gas was cheap. But most late-model cars – especially family-type sedans and so on – have much smaller trunks (or cargo areas) so space is at a premium. Also, the car companies are under tremendous pressure to curb the weight of their vehicles to make them as fuel efficient as possible. Result? Many new cars come from the factory with arguably iffy jacking equipment that’s not easy to use and which can be dangerous to use.

It’s a really good idea to familiarize yourself with the equipment you have by doing a “dry run” in your driveway. Not only will you know ahead of time where the equipment is and how it works, you’ll know whether it’s worth buying some better jacking equipment and keeping that in your trunk for just-in-case. A good quality bottle jack (or similar) can be bought for $30 or so at any auto parts store; ditto a decent lug wrench – one with some leverage. Which the factory lug wrench may have a lot less of.

Of course, you may not have any jacking equipment at all – if your car has an inflator kit (or “run-flat” tires). In that case, just be sure everything you need is actually in the car – especially if you bought the car used – and that it’s all in working order.

* Be careful when driving on a donut –

Another thing about late-model cars is the absence of a full-size spare. Instead – for reasons of space and weight-saving – there may be a mini-spare, designed for temporary use only. Those exact words will probably be right there on the tire. Heed those words. Don’t drive fast (usually, more than about 55 mph) and increase your following distance – because the car may need longer to come to a stop in an emergency and may react weirdly in a panic stop situation. Why? You’re – typically – driving on three normal size (width and diameter) wheels and tires – and one (usually) much skinnier one. This unbalances the car and will make it respond differently to your inputs. 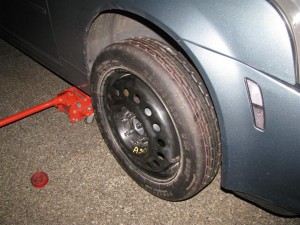 If you have a pick-up truck or SUV, you may still have a proper (full-size) spare, in which case, once it’s on, you can resume driving normally. However, be aware – ahead of time – that sometimes they don’t make it easy for you to get at the spare. It might be mounted underneath the vehicle – and you may have to crawl around in the mud to get it down or off. In that case, it’s a good thing to keep an old blanket under the backseat  or someplace like that for just-in-case. Something you can lie on while you work . . . instead of the mud.

Also: It’s a really good idea, if you have a vehicle (like a truck or SUV) with a spare tire that’s mounted underneath the vehicle, to spray down the bolt/nut holding it in place  with a product like WD-40 once or twice a year – so that it won’t rust and freeze in place.

* Loosen the lug nuts before you jack up the car –

It’ll be a lot easier to do with the weight of the car preventing the wheel from turning as you attempt to turn out the lug nuts!

Some people – me among them – like to put a little grease on the studs to keep them from seizing up or becoming so difficult to break loose you need to be He Man to get it done. And be careful not to overtighten the lug nuts when you’re finishing up. With late-model cars, it is very easy to cause physical damage to brake rotors (this is the disc looking thing behind the wheel) by over-tightening the lug nuts. This happens all the time at repair shops, which use air guns to get the work done faster. Don’t do it to yourself. Go hand-tight – and then go to a shop where they have a torque wrench and can tighten the nuts to exactly the factory specifications – and no more.

* You might not realize you even have a flat –

Many new/late-model cars come with what are called “low aspect ratio” tires – basically, high-performance or “sport” tires with short, stiff sidewalls designed to limit flex during cornering and so make the car feel more responsive and handle better under load. All to the good. But these stiff-riding, stiff-sidewalled tires also give you less in the way of visual – and audible – cues that they are running flat – or even completely flat. A standard tire that’s lost a lot of air will look flat. And it will give you the thumpa-thumpa-thumpa heads-up that it is flat. But a low aspect ratio sport tire may look ok even if it’s flat (this has happened to me) and the car may even drive seemingly ok – until you load the tire by, for instance, going into a corner at high speed. 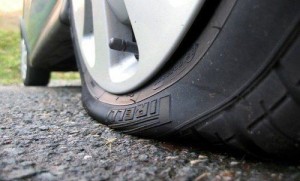 It’s especially important, therefore, to periodically verify the inflation pressure of your tires if your car has sport-type or run-flat tires – and doesn’t have an electronic tire pressure monitoring system – as in the case of many later-model cars. (Current-year cars all have tire pressure monitors.)

Armed Government Worker “Is in Control of the Situation”