I have two “modern” vehicles – a ’98 and a 2002 Nissan Frontier pick-up. Both basically identical except one is 4WD (manual control, part-time) and one (the ’02) has intermittent wipers.

The trucks have the standard four cylinder engine (sufficient for me), AC and heat, disc/drum brakes and a basic AM/FM stereo with two speakers. No power windows or locks, no cruise control. Manual five-speed stick on the floor.

They are about as simple and functional as you can get in a modern vehicle, but I don’t ever feel like I’m driving a stripper or missing anything – except a hole in my wallet.

My trucks may not be rocket ships off the line, but they can easily cruise at 75-plus mph for hours (and get close to 30 mpgs on the highway if I keep it around 65 mph). They have plenty of power for just knocking around, picking up things at Home Depot, etc.

If I feel the need for speed, I have a sport motorcycle than can do 10 second quarter miles – quicker than a six-figure Porsche. It cost me less than $8,000 brand new.

Both my trucks are comfortable, nice-looking machines. Even the ’98 – which is now more than 12 years old. The paint still shines and unless you know your Nissans really well, it’d be easy to convince you the truck is no more than five or six years old.

I expect it to last another decade, at least. After all, it only has 120k on the clock – which for one of these things is “low mileage.” (Frontiers with the bulletproof Nissan four-cylinder engine often go 250,000 miles or more, which is diesel-like longevity.)

Neither of my trucks cost me more than $7,500. In part because I bought them used. I always let the first owner eat the depreciation. But also because I didn’t need the optional (and thirsty/more expensive to maintain) V-6, fancy automatic push-button 4WD, 16 or 17-inch rims, lots of power options, or leather, etc. – which would have pushed the purchase price up by at east 30-40 percent.

I’ve had the ’98 for almost seven years now, so it’s essentially become free transportation (I could still sell it for about $4,000 if I wanted to, in which case my total cost of ownership would likely show a profit).

I have never felt the need for anything else – certainly not massive chromed “rims,” GPS or  $2,000 “entertainment” systems.

To me, this makes sense.

Unless you’re rolling in dough and buying all this stuff  is like an ordinary person deciding on a whim to pick up an extra six pack of Bud, it’s just crazy. For average people, living on less than $100k annually (typically, a lot less than $100k annually), anyhow. It’s like a child, bedazzled by some shiny object – oblivious to the consequences. Like the child, there’ll be an initial rush of enthusiasm, followed in short order by disinterest and boredom. Time to move on to the next new thing.

Is having a car with all the modern “stuff” installed kind of neat? Sure. But it means (for most people) spending way beyond their means for things that in some cases didn’t even exist a few years ago and which they managed to live quite comfortably without.

This never seems to occur to them.

It’s as if the country has been seized by a mania to Buy! Now! that can never be satiated. But even if you buy the “latest” of everything today, tomorrow there will be something else. Which our neurotic brains have been conditioned to believe  we must have, else we’re behind the curve and no longer cool, or whatever they’re calling it.

But I think being debt-free is pretty cool. My trucks may not be as swanky as the guy in the next lane’s new S-Class Benz. But my trucks are paid for – and I don’t have to go to a cubicle farm everyday so I can keep up with the payments, like he does.

If that’s the price of being cool – or trendy – I’m not buying. 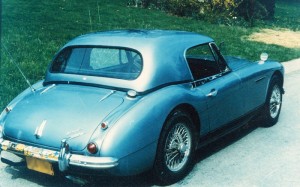