If you’re trying to decide whether to buy a bigger – or smaller – car, you might want to consider some of the following pros and cons: 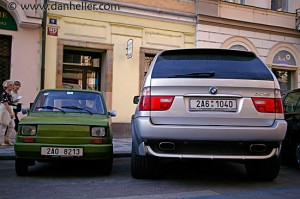 This is because they usually have smaller – and lower torque at higher RPM – engines. This means you have to get the engine revving to get the car moving. Or at least, moving quickly. With a manual, this is easy. You raise the RPMs, let out the clutch – and off you go. With an automatic, not so much. It takes a moment for the engine to build up speed (RPMs) after you push down on the gas pedal with the transmission in Drive – a moment or two for the engine to get into the higher range of its powerband, where it makes its power – and torque. In the meanwhile, other cars are passing you by.

Most small (four cylinder) engines have torque peaks well above 4,000 RPM – and don’t make much torque at all in the idle to 2,000 or so RPM range – the engine speed you’re starting out at from a red light. 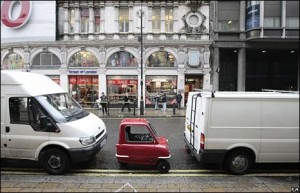 The result of  a small engine with not much torque at all – and whatever torque there is way up there in the powerband – teamed up with an automatic transmission – is usually sluggish performance. Especially when accelerating from a standstill.

Bigger cars, in contrast, usually have bigger engines – sixes and sometimes eights. These engines produce more torque – and at lower engine RPM. For example: The full-size Chrysler 300’s big V-8 produces tremendous torque – 394 ft.-lbs. – at 4,200 RPM. Much of this prodigious torque is also available at lower speeds- making it ideal for pairing with an automatic transmission.  A big car with a stick can be plenty of fun to drive – but you usually won’t lose much in the way of performance by going with the automatic, if you prefer to let the transmission do your shifting for you.

Diesel engines – which make lots of torque down low in the powerband – also work well with automatics. Unfortunately, there are only a handful of small cars available with diesel engines in the U.S. 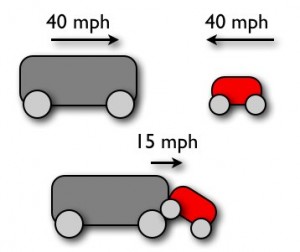 This one’s obvious – or ought to be. But the way crashworthiness ratings are published can be very misleading – because they don’t rank cars in absolute terms but only against other cars within their class of car. In other words, a compact is compared to other compacts – and a full-size car compared to other full-size cars. Compact cars are not compared with full-size cars. So, a compact with a 5 Star rating may be superior to another compact with a 4 star rating. But it’s still probably inferior to a full-size car with a 4 star rating. As a rule, the larger (and heavier) the vehicle, the more crashworthy the vehicle.

On the other hand, it’s certainly arguable that a smaller car is less likely to end up in an accident to begin with because it’s (typically) more nimble and – assuming an attentive/skilled driver – easier to avoid getting crumpled in the first place.

Also, most small cars are FWD (or AWD) and for the average driver, this layout offers more secure handling, especially in wet/winter driving conditions – which also reduces the chances of having an accident in the first place. 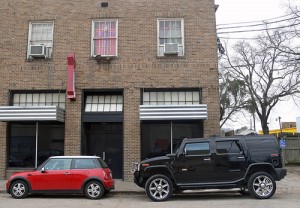 Some cars are small on the outside but surprisingly spacious inside – sometimes, more spacious than physically larger (on the outside, anyhow) cars. Ask Mini Cooper owners – as an example. The Mini is tiny on the outside, but has more room up front than many considerably larger cars. And of course, there are vehicles like the Honda Fit and Scion xB that can swallow more cargo (such as a pair of bicycles) than some much larger vehicles.

Similarly, some big-on-the-outside vehicles may be surprisingly cramped on the inside. Or have puny trunks. The huge-on-the-outside Chrysler 300, for example, only has a 16.3 cubic foot trunk – while the much smaller on the outside Honda Fit has 57.3 cubic feet of space for stuff. That’s more than three times as much “trunk” space! 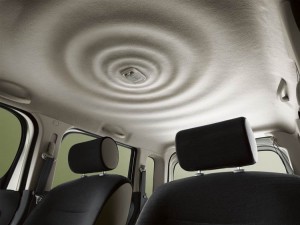 So, don’t necessarily go by category – e.g., “compact” or “mid-sized.” Go by stats. Check out the interior volume of the car you’re considering. The cargo capacity (total and with the second row seats up), front and back seat leg and headroom – etc.