As a biker (and someone who rode bicycles in the past) I’m sympathetic to people on bicycles. Cagers (people in cars) can be dicks.

Courtesy – and common sense – should extend both ways, though. 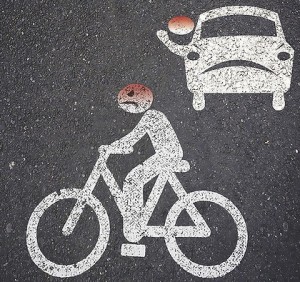 People in cars should should never crowd cyclists – and pass with care, when it’s safe to do so. It is horrifically easy to seriously injure a guy on a 50 pound cycle when you’re driving a 5,000 lb. SUV.

Cyclists, for their part, should be aware of cars – and do their best not to impede them – just as slow-moving car drivers, RV drivers and drivers of tractors, etc., ought not to. Moving over to the right – or even off the road, if need be – is sometimes the courteous (and arguably, safe) move. I do it when I’m hauling junk in my truck, for example. It’s no skin off my nose – and I’ve never understood why any slow-mover (car, bicycle, whatever) wouldn’t do it, once they notice you back there. It dissipates tension (more on this in a moment) and beyond that, it’s just the cool thing to do. You see there’s someone behind you who obviously would like to get by.

Why not let them by?

We have a large number of cyclists in my area and here, at least, part of the mutual animosity between cyclists and cagers stems from belligerent actions by both parties. Car drivers who “shave” the cyclists, deliberately trying to intimidate them by passing as close to them as possible. Cyclists, who ride two (or three – or  a dozen) abreast uphill doing less than 15 MPH on a road with a 45-plus MPH traffic flow… .

One group grows to resent – then hate – the other. And some in each group begin to actively look for an opportunity to  harass the members of the other group – as in the video of the man in the Explorer laying on his horn as he creeped along behind a pair of cyclists. (Video of that here.)

Anus apertures abound – some in tight-fitting spandex; others in Easy Fit jeans.

Each is equally smelly.

There are also structural problems – specifically, the increasing absence of legal passing zones. In my area, they are being disappeared at a startling rate.  Formerly legal passing zones with clear sight lines and plenty of room to do it safely – just painted over double yellow. I assume this is being done to provide more pretext for ticket-issuing, or just as another dumbing-down measure precipitated by the actions of a Clover like that guy in the Explorer who could not execute a safe pass – and so now everyone is prohibited from passing. Very much like no-right-on-red. 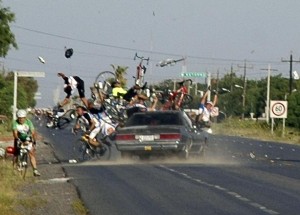 It’s no fun for the cyclists, either. Who wants to have three or four (or a dozen) cars breathing down one’s neck?

In any case, the absence of legal passing zones makes it more frustrating – and thus, dangerous – for car drivers to pass slow-moving bicyclists. Because now, the car driver is faced with executing a potentially ticketable maneuver – which affects his concentration on the task, makes him nervous – etc. Hence, it makes executing a safe pass more difficult for those who choose to attempt it – and discourages many from even trying, out of fear of being caught by Officer Unfriendly and issued a piece of payin’ paper. Result? A conga line of cars creeping along behind a cyclist at perhaps 20 or 30 MPH below the speed limit for that road. The cyclist won’t pull off or move over – and the cars won’t try to pass. Or they pass unsafely.

This gins up tension – and tension on the road is inherently unsafe.

Anything that impedes the natural, smooth flow of traffic is a problem – whatever the cause. It can be an artificially low speed limit or dumbed-down laws that make reasonable actions (such as making a right on red when the way is obviously clear, or passing a cyclist when it’s clearly safe to do so) illegal. Or it can be drivers – or cyclists – who refuse to obey the Prime Directive of the road: Yield to faster-moving traffic. 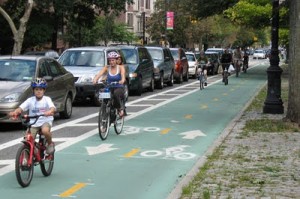 It is technically (legally) correct, of course, that bicycles are vehicles under the law, just like cars – and entitled to use the road just like cars. But that ought not to become an excuse for anus aperture conduct.  Bicycles – like RVs – have some inherent limitations (they’re slow) and these limitations arguably impose some additional obligations on those piloting them.

That obligation being simple common courtesy. Yield, when other vehicles are stacking up behind you. I suspect if more cyclists did this as a matter of course, there’d be a lot less tension between car drivers and cyclists. Similarly, if you’re in a car, remember that you’re in a car – and several thousand pounds of steel and glass can be very intimidating. Exercise extra caution. Don’t be a dick.

Another structural problem is the absence of dedicated bike lanes on roads where motorized traffic is moving at speeds significantly higher than bicycle traffic can keep up with. This is called speed variance – and it’s a known killer. It results in abrupt slow-downs, speed ups, crossings of the double yellow – and so on. More tension equals more dangerous road conditions – for all parties. Dedicated bike lanes greatly ameliorate the inherently unsafe condition that otherwise exists when you have vehicles operating at significantly different speeds on the same road. Unfortunately, like turn-out lanes, bike lanes are still a relative rarity in most areas. There are “resources” available to pay for $40,000 cop car Taurus SHOs (see here for a story about that) … but not for an extra 12 inches of asphalt on the shoulder. Notwithstanding that it would probably “save a lot more lives,” in the popular jargon of today. 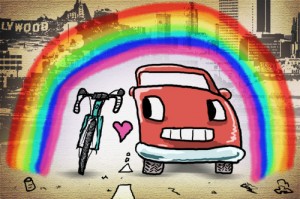 The bottom line? A little courtesy – and common sense – goes a long way. Try not to be dick to your fellow road users, no matter what they’re driving – or riding.

Armed Government Worker With Down Syndrome