In the ’70s, there was The Hustle. We’ve got a new dance here in the Homeland. It’s called The Holocaust Shuffle. The steps are easy to learn. Just stand here, legs apart – and arms up. Say nothing – and do exactly as you are told. Now, freeze in place. There! You are almost ready… . 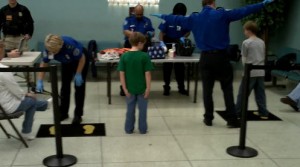 What are they normalizing? We all know, deep down – it’s just that most of us don’t want to face up to it. We can’t bear to. It is inconceivable. Unimaginable. Impossible. It would upend the conditioning of a lifetime – our entire view of the world. Of our country and culture – of the people all around us.

Such things can’t happen again. And certainly not here.

Ah, but they can. Right here, too.

They already are. And the process began long before the events of nineleven – the new High Holy Day here in the land of the formerly somewhat free. It has been a work in progress since at least the 1980s – when the notion of randomly stopping people – the first frontal assault upon the Fourth Amendment – was introduced and accepted by the courts and then the public. Got to get those dangerous drunks off the road, you see.

Fast forward 20 years and now people are randomly groped as a matter of routine. Got to get those dangerous terrorists now, you see. Personal space itself is no longer inviolate. They can literally spread your cheeks and jam a thumb up your anus now. Just to be “safe.” Over a traffic stop.  No, seriously. Don’t believe it? Believe it. They can throw you over the hood of a squad car and draw your blood. They can kick in the door of your home. They can shoot your dog if they feel it threatens “officer safety.” And they can shoot you, too. That’s today.

Try to imagine what it will be like 20 years from now.

It takes time to reorient the instincts of an entire culture – like making bread. The “yeast” is always The Fear –  in its ultimate form, of a bogeyman who transmogrifies into ether – and who can never be caught. A perpetual threat means perpetual war.

Emanuel Goldstein wears a beard and caftan now. But he serves the same purpose. 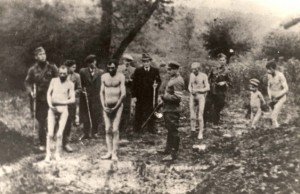 Keep them terrified. Denounce those who aren’t terrified for lack of patriotism – and exposing the country to danger.

The Reichsmarschall knew all about it.

Insert among them legions of costumed Authority Figures – and make them as unavoidable as bumpers in a pinball machine. Demand servility – “respect for law enforcement” – and teach the people that obedience is the ultimate virtue. Deify authority itself.

“Safety” and “Security” must become the Two Commandments of this new order. One can never have enough of either, you see. That is the beauty of the thing.

But wait a little… .

Start with the low-hanging fruit. Kids in particular.

They are, after all, the future. Don’t bother – yet – with the people who avoid airports, say. Who push back at checkpoints.

They are few and far between – of little importance. The important thing is to establish the principle. To routinize the herding of people like cattle. The barking of orders at them. And also the prod at the first sign of disobedience. Most people will not “resist.” Indeed, they will bristle at those  few who do. Stop holding up the line! Do as your are told! Don’t you realize they are just doing their jobs? Keeping us safe?

It goes both ways, of course. The herders are as integral to the process as those being herded. The big hands will always need many little hands. But they, too, must learn obedience. And they, too, can be just as easily disposed of later on. A man named Yagoda could explain this. Or perhaps his successor, a man named Yezhov. And the one after him, Beria. But few among the new Praetorians care to listen. Like Yagoda, Yezhov and Beria, they imagine themselves to be invulnerable. But inevitably, the wheel will turn. They will find they are just as disposable as those they dispose of. Holiday is the best time of the year when you are there. Perhaps, like that funny little man, Yezhov, they will have a few moments to ponder the irony of it all  – before it is their turn at the lip of the ditch. 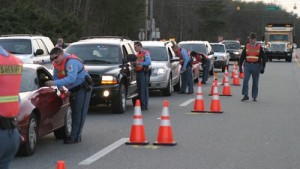 One can only hope. (See here for a recent case in point.)

In the meanwhile, most of the public grows ever-more-accustomed to arbitrary authority. To being herded, barked at, prodded – just like cattle in the field. In time, they will perhaps accept being herded onto rail cars – and sent off to their inevitable fates. Just as six million two-legged cattle accepted it not all that long ago. Just as it will be accepted again, here, when the time is right.

And that time is not far off now.

Reader Question: In Praise of Elon?