Yesterday, I ran into a fresh Clover patch – the enstupidation of what had been a commendably Libertarian-minded entrance/exit to the main shopping center in my small-town Burg of Roanoke, VA. 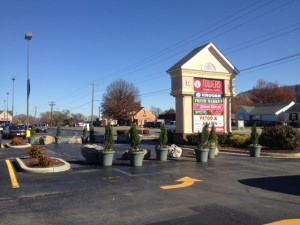 Previously, there were two entrances – which also served as exits. This facilitated efficient getting into – and out of – the shopping center. Because if you saw a Cloveritic driver ahead who – being a Clover – had trouble making a left turn into the shopping center against oncoming traffic, you could make your turn at  the other entrance.  And be parked and in the store before Clover succeeded in executing his turn.

Naturally, this infuriated Clover – probably, several of them. And they did what Clovers do: Enstupidized the entrance (and exit) to the shopping center by making each (former) entrance/exit one way-only. With a double row of potted plants and a line of huge boulders (literally, big rocks) physically separating what had been a free-flowing (either direction) system into two separate ones.

Now, all incoming traffic is at the mercy of any Clover who bollixes up the line. Which makes the line to get in much longer. And to get out, too.  Instead of turn – and make your way through the path of least resistance – it’s now queue up behind the Clover conga and proceed through the prescribed maze Clover has laid out for himself. And for everyone else, too. We all get to drive at his pace – and in accordance with his abilities. Or rather, lack thereof.

Which is just how Clover likes it.

They have even put up flashing yellow lights – and stern signs. Plus a cop – there to make sure everyone toes the line. Clover’s panties must be moist by now.

Almost ten years ago, we fled Northern Virginia – mainly, to get away from Clovers. For an all-too-brief-time, we enjoyed a relatively Clover-free life, at least compared with what life had been like in Northern Virginia. Here, there were passing zones. And winding roads that were both challenging and enjoyable. You could just hang a left at whatever opening presented itself to access the shopping center downtown. People figured it out – without “help” from Clover. The general level of competence was higher, because the environment required it. People had to exercise judgment – and those who could not exercise it could be dodged. Pass them, avoid them – get around them. Leave them to sit and sputter in Clovertic outrage. 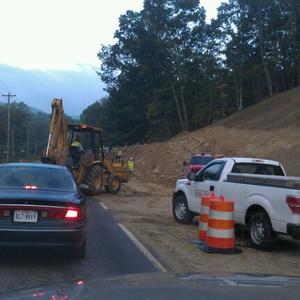 It’s all going away.

First, the passing zones. I count at least five along my normal driving routes that have been painted over – probably out of pure spite by the Clovers who control the paint trucks. I doubt a legitimate traffic survey was done. Instead, I suspect a Clover bitched about “dangerous speeders” passing him – and if government is good at anything, it is excellent at accommodating the plaintive cries of Clovers.

Next up for reconstruction – literally – the windy roads. Clover can’t corner – and gets upset when more able drivers stack up behind him because he can’t corner. Rather than pull over, Clover whines about the “dangerous” roads. The local pols are only too happy to oblige him – especially when there are Obama Bucks on the table to be grabbed. So, the formerly scenic and fun-to-drive windy secondary road (US 221 a few miles north of Bent Mountain) is in the process of being replaced by an epic (and epically ugly) construction project that will end in a four lane (two each way) broad avenue of blight (pity the poor homeowners whose front yards were eminent domained) that will nontheless be posted at 35 MPH even though the old two-lane (one each way) was posted 45 – and everyone (except Clover) was running 55.

Clover is of course ecstatic. He savors the pending prospect of not having to pay much attention to the road. And all those dangerous “speeders” will get theirs, too – because the new avenue leaves plenty of room (and better sight lines) for cops to run radar.

The entrance to the shopping center, though, may be the canary in the coal mine development for me. It is so … Northern Virginian they maybe ought to rename the place Tysons III (or some such like that). 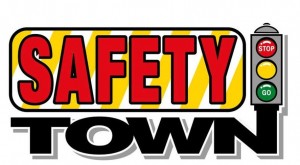 Meanwhile, Bland County – the next county over and still depopulated and so probably possessed of a lower Clover Count – begins to look more and more appealing. Maybe the Dakotas, even. There’s got to be someplace left where a man can hope to live out his days without coming up against Clovers – and Cloverism – every day of his life.

PS: Happy Thanksgiving to everyone. Here’s to hoping next year – or maybe the next year – we’ll have more to be thankful about.