Chrome is pretty – and pretty expensive. Especially if you’re paying to have stuff plated vs. just buying chrome-plated stuff. Go price what it’ll cost to have a cam cover or fork lowers chromed and you’ll quickly see what I mean. The cost of chrome plating has increased by 50 percent or more since the 1990s – chiefly because of compliance costs that chrome shops have to deal with. Many have shut their doors – and the rest have simply increased their prices. 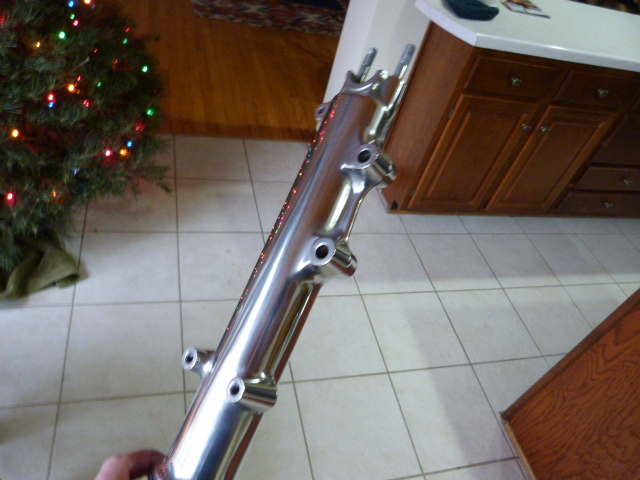 Polishing metal – instead of chrome plating it – is more labor intensive. But it’s labor almost anyone can do. So, no need to pay someone else to do it for you. Also, it does not require special facilities or much in the way of special tools.  It’s a cheap – if not altogether easy – way to buff up your bike. I’ll walk you through the process using the fork lowers from my ’76 Kawasaki Kz900 as the guinea pigs.

* Sandpaper – in grits ranging from 220 to 2000. I like to buy large sheets, which are usually cheaper than the smaller, pre-cut stuff. It’s easy to cut the larger sheets into smaller sections – and you’ll probably have to do this anyhow to get the right size sheet to effectively get at whatever area you’ll be working on. 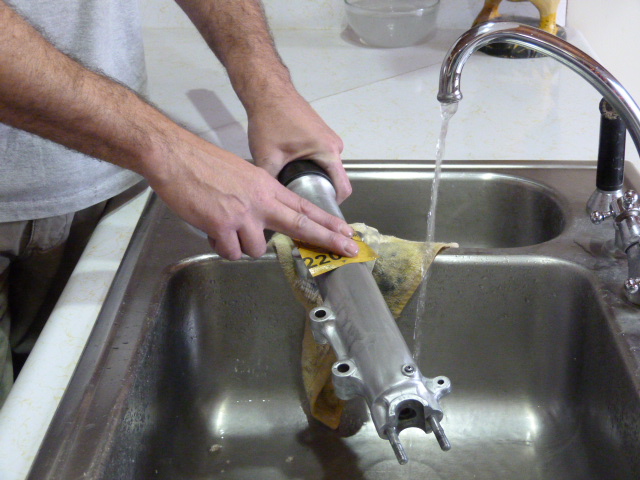 * A sink with running water – to wet sand.  Wet sanding is preferable to dry sanding for several reasons, chiefly that your sandpaper will last longer and there will be less mess. Well, sort of. Your wife may not be happy about using the kitchen sink for this sort of thing.

* A buffing wheel – which can be an attachment for a standard household drill or (better) a buffing stand. You can buy one already set up for this, or go “dual purpose,” as I have, by mounting buffing wheels on a bench grinder. If you already have a grinder, this is the least expensive/easiest way to go. All you need to do is buy some buffing wheels that will fit your grinder (replace the grinding wheels with the buffing wheels). Buy  a stick of “cutting” compound while you’re at it. This is a light abrasive you’ll use to do the final machine polishing. 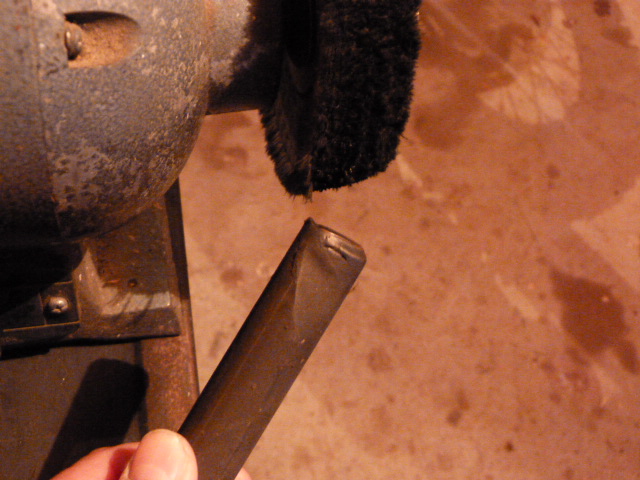 * Some hand/paste polish – and paste wax. The hand polish you’ll use for the final detail work. The paste wax you’ll use to protect the finished work. The one drawback of polished metal is maintenance. Left exposed, the shine will decline. This is why, back in the day, most bike manufacturers shot a coat of clear paint on bare aluminum parts – like fork lowers and engine cases – to keep them looking nice. Unfortunately, the clear coat always yellowed and cracked after a few years. The only way to fix that is to do what we’re discussing doing now. And the only way to preserve the results is to – initially – wax the polished metal. This won’t render polished parts immune to future aesthetic deterioration – but it will help.  More on this in a minute. 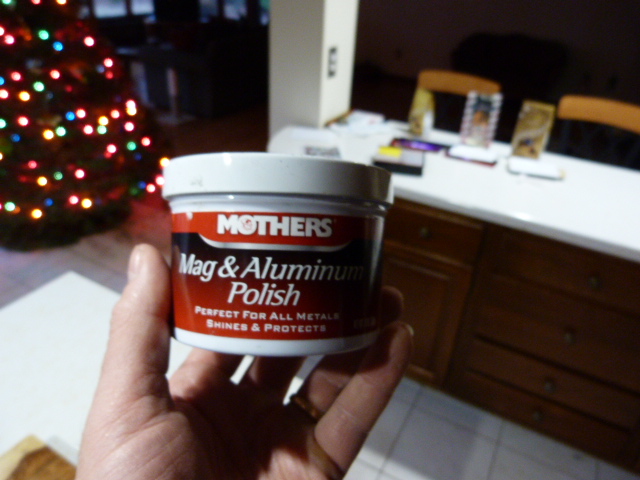 Now, for the actual work:

* Clean the part thoroughly. Get rid of oil, grease and so on. It’s ok to use Brill-o pads for this. In fact, Brill-o does a pretty good job of removing any vestiges of ancient, yellowed, cracked clear lacquer that was applied to your parts 30 or 40 years ago. Yes, the Brill-o pads will leave scratches. It’s ok – you’re going to sand/polish them out.

Once the part is really clean, examine it closely. Look for deep scratches – and pitting. If you’re lucky, you’ll have neither. But if you do have one or the other, the first thing you’ll need to do is try to sand down the scratches/pits to smooth metal. I use 220 grit for the initial “cutting.” I also like to do the sanding by hand. It’s Zen (for me) and also allows fine control. You can use a Dremel tool or wire wheel on a drill to get at badly pitted areas, but be very careful as it’s easy to leave deep scratches and mess up the part. Sanding by hand takes longer but it’s almost impossible to hurt anything this way. Don’t be in a rush. It took me a week to do each of my Kz900’s forks. I put in 15 minutes of sanding here, another 15 minutes of sanding there.  When my hands got tired – or I got bored – I quit, cleaned up and left everything for manana. Remember Mr. Miyagi? Wax on … wax off. Same principle. 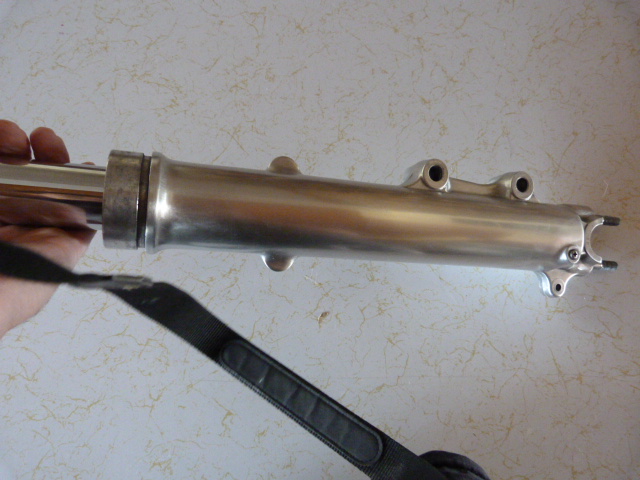 Work your way up the grits (no, not Vern, Dale and Jed). After 220 comes 400. Then 600. Then 800. As you sand, occasionally change directions (don’t sand in just one direction). Turn the part around. Go up and down – then from end to end. I also like to sand in a swirling pattern as part of the process. The point of all this is to get rid of small scratches in the material and leave a progressively smoother surface at each state of the process. By the time you get to the final grits – 1000, 1500 and 2000 – the part should look and feel extremely smooth. (See pic above – that part is not polished yet.)

Only very fine swirl marks/light scratches should be visible by the time you get to 2000. If you still see larger scratches and so on, you may have to go back down the grits, sand some more – and work your way up to the 2000. The ready-to-polish part should look like a fresh casting – “raw aluminum.” Shiny – but not yet mirror shiny.

Now, you’re ready for the buffer wheel. I use “black” cutting compound (the stuff comes in color coded sticks) to take off the light scratches that remain. Use less rather than more compound – and don’t apply heavy pressure to the buffing wheel as you work. Easy does it. Let the compound do the work. Work the part until you see no more scratches – and a warm, deep luster. 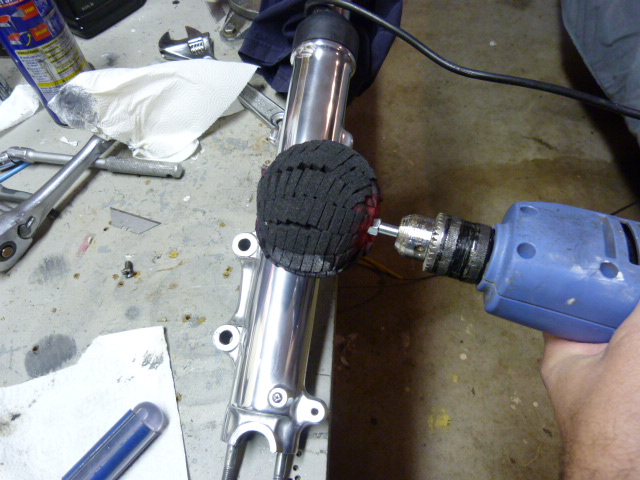 For the second-to-last step, I use an orbital polishing ball and Mothers mag-alloy polish. The ball fits onto any standard household drill. It’s made of soft individual flaps that lap (and polish) the metal. Dab a small amount of the polish onto the part and – working carefully-  use the polishing ball to bring the part to the next level of shininess. The last stage is to hand rub with a soft cloth to remove any remaining polishing compound. At this point, the part should glisten. 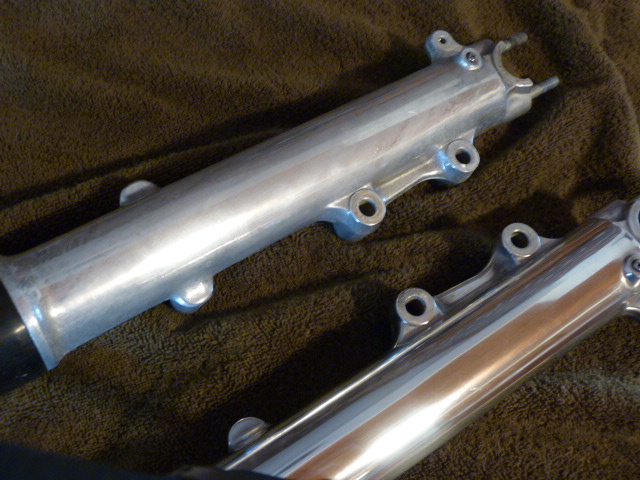 But, you’re not quite done. Before re-installing the part, I like to give it a thorough coat of wax. This will help keep maintain the shine you worked so hard to get. Down the road, you will probably have to polish the part again – but if you’re diligent about maintaining the wax coat, you ought to be able to avoid having to sand the part again.

My process is to lightly hand polish (rags and Mothers) the polished parts – on the bike – once a year, with a fresh coating of wax every time the bike is washed/detailed (which means 2-3 times a year). This method works well on a bike that’s kept inside and not ridden in poor weather (rain especially).

For a more permanent, less labor intensive and more durable solution, you could also do what the factory used to do: Clear-coat the freshly polished part. This is probably the way to go if the bike is going to see weather – and if you don’t have the time (or inclination) to be doing the polish/wax drill every so often. Just remember: Eventually, the paint will yellow and crack and look like you-know-what. 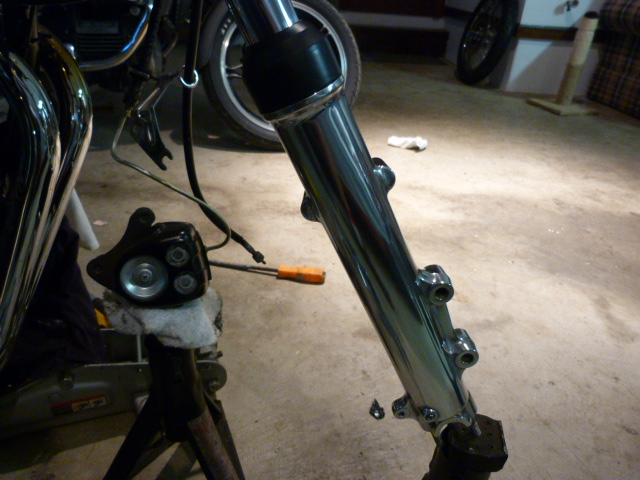