Some ideas sound great… or at least,  ok – until you think some more about them. Let me give you some examples: 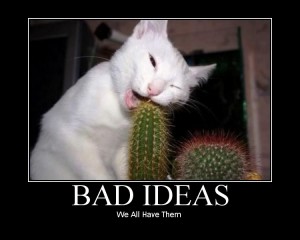 The idea here is that nitrogen, being an inert vs. reactive gas like oxygen, will help tires last longer – with the added side benefit of maintaining air pressure better because nitrogen has a tougher time permeating through the tire (and porous alloy wheels) than oxygen, because its molecules are larger.

Well, what about the air – the oxygen – that’s already in the tire? Unless a vacuum is created first – and all the air sucked out  – the tire is only partially filled with nitrogen. Which means, reactive oxygen is still inside the tire. Maybe not as much, but it’s still there. And of course, reactive oxygen surrounds the outside of the tire – and there’s not much that can be done about that.

Plus, what happens when you need to top off? Nitrogen pumps aren’t exactly on every street corner.

So – I dunno. Filling up your car’s tires with nitrogen might have some advantages – such as maintaining the proper pressure over a longer period of time. But I’m skeptical about the other claims made. 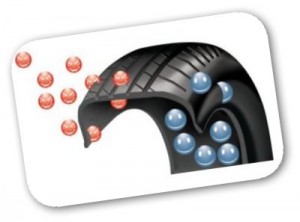 In the late 1980s, a federal regulation went into effect requiring all new cars to have a third brake light – formally, the Center High Mounted Stop Light, or CHMSL, in government-speak. Aesthetically atrocious, the CHMSL supposedly decreased rear-ender wrecks by decreasing the reaction time of the not-paying-attention driver in the following car. He noticed the brake light earlier and so was able to stop sooner. Arguably, maintaining adequate following distance – and paying attention – would work as well or better than a CHMSL – and without uglifying the car. But that debate came and went 25 years ago.

Fast forward to the present. Someone has come up with the idea of a blinking CHMSL. You may have seen one, because they’re becoming fairly commonplace. The driver brakes – and the third-eye CHMSL blinks three or four times in quick succession. Apparently, the idea is this will make the CHMSL even more noticeable – and thus, reduce the number of rear-ender wrecks some more. But what happens when you’re in a sea of  heavy traffic, all those CHMSLs dancing like spastic Christmas lights? Seems like a … distraction to me. 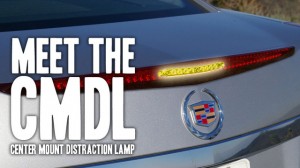 But hey, the government knows what it’s doing.

A growing number of new cars come with electrically-activated parking brakes – apparently, because it requires too much sweat effort to pull up on a lever or depress a floor-pedal with your foot. So, laziness – rather, appealing to people’s laziness (and love of gadgets) is part of the reason why. But there is a practical reason, too: Limited space inside the car. A pull-up emergency brake (more on this in a second) handle takes up a fair amount of space that could otherwise be devoted to important things like cupholders and iPod hook-ups.  A little switch – to electrically engage/disengage the parking brake – takes up less space plus looks “hip” and high-end.

Now, for the semantics – and italics. Electric parking brakes are exactly that. They hold the car in place once it’s parked. But as emergency brakes – something to slow/stop the car in the event the primary braking system fails – they are useless. Because they cannot be modulated, as a pull-up/cable-actuated emergency brake can. Electric parking brakes are on – or off – no gradation in between. Engage it while the car is moving, and the rear wheels will lock – and the car will skid.

With a pull-up emergency brake, you can control the amount of braking force applied and slow the car safely, without skidding.

It’s not “hip” and high-end. But it does serve a worthwhile purpose. 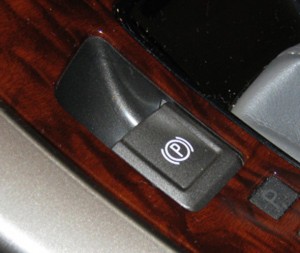 All new (and recent-era) cars have what’s known as “two-step” finishes. There’s the color coat –  and on top of that, a thin layer of translucent paint – the clear coat. The clear coat is protective as well as what gives the finish its shine. But therein lies the rub – literally. Once the clear layer is damaged – by bird droppings, for instance – no amount of rubbing or polishing will ever bring back the shine.

The only thing that will is repainting the area.

Before the advent of clear-coat finishes, it was often possible to use a light abrasive compound to buff out damaged (or sun-faded) areas. The paint itself was thicker, too. Thus, it was possible to bring back heavily faded finishes, without repainting the car.

The upside is, they do last longer – usually –  and look better longer. I’ve got a 14-year-old truck that still looks nice, even though it sits outside and only gets a wash every once in awhile. 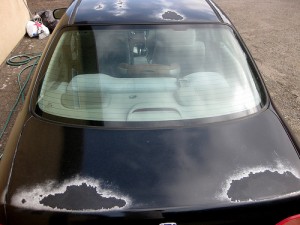 But once damaged, there’s not much you can do to bring back the shine – without bringing out the sandpaper and the spray gun.