Time passes, things change. Have you noticed that while most new cars are much harder to get into without a key, once you’re in – the glovebox is easy to access? 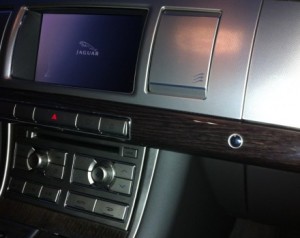 Because there’s no lock for that. Just pop the catch.

Locked gloveboxes seem to have disappeared about the same time that having two keys – one to unlock the car, the other to start the engine – did. That was circa late 1990s. Some late-model car gloveboxes don’t even have a handle to pull or a button to depress. In new Jaguars, for example, all you have to do is run your finger over a sensor – and it’s open sesame.

What else has changed lately? How about:

I am pretty sure Ford started this – or rather, started putting no-redline tachometers in its vehicles. Probably, it was done to save money. Instead of having car (and engine) specific tachometers – with redlines specific to that car/engine – Ford decided to go with a one-size-fits-all tach that could be used in multiple vehicles and also within a given model range – for example, both the four and six-cylinder (or six cylinder and V-8) versions of a given vehicle.Obviously, redlines had to go – because it would be silly to put a tachometer with a 5,500 RPM redline in a car with an engine that has a 6,500 RPM redline. 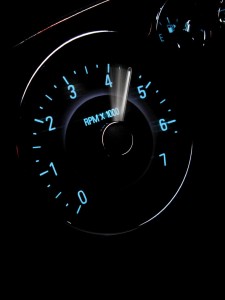 Of course, eliminating the redline pretty much defeats the purpose of having a tach in the first place. It’s a good thing all new cars come with electronic controls – including rev limiters – that automatically prevent the engine from being over-revved (unless you’re really determined and do it by dropping down into first gear at 80 MPH). Otherwise, you might have no idea you just crossed the redline – until about 5 seconds later, when the engine spits a rod through the side of the block.

Personally, I miss redlines. They provide useful info and pretty up the face of the tach.

The procedure used to be (in an automatic-equipped performance car): Hold down the brakes with your left foot while easing the accelerator pedal down with your right. Ease off the brakes just enough to let the tires break traction, but without letting the car surge forward. As you feel the tires begin to spin, put your right foot down – and smoke ’em! That trick is going the way of the catalytic converter test pipe. I’ve had a number of new cars to test drive lately that simply will not allow it. The computer cuts the revs if it detects you’re holding the brakes down. The only end-run I’ve figured out is to use the parking brake – provided it is the pull-up type, which permits some degree of control (push-in parking brakes are usually either on – or off – and you can’t modulate the force applied, which is necessary to a successful tire-fry). And even that has been Cloverized. In virtually all of the cars I’ve tested during the past couple of years, the parking brake is set up so that it barely has enough holding power to keep the car from moving when parked. But nowhere near enough to lock up the back tires when it’s moving (or trying to). Which is  critical for both a successful burnout and stunt man-style 90 degree turns (and 180 degree turn-arounds, too).

ABS has all-but-eliminated these. Because the brakes no longer lock – which means the tires don’t stop rotating while the car is moving. Which means, no black marks on the road. Or less of them. It’s still possible to slide and skid – and leave some rubber on the road as evidence of your passing. But one thing you can’t do anymore is the sort of driving we still see routinely done during movie car chase sequences: Lock up the brakes, heel the wheel over hard right (or left) release brakes – and power slide the car onto a sidestreet.  If you take a high-performance driving course, you’ll discover they turn off the ABS to teach you how to drive. How to really drive.

There’s a reason race cars don’t have ABS. Which ought to give you some idea why people who like to drive hate ABS.