Oh, the holiday traveling season is upon us! And with it, comes all the hazards of travel.  One of the ones that simply did not exist up to just a few years ago was the possibilities of our fine public servants at the TSA (Transportation Security Administration) pilfering your stuff out of your luggage while searching for bombs and other contraband. 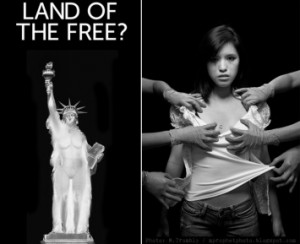 According to one article, “Overall, nearly 400 TSA (Thousands Standing Around) employees were fired for theft between the years 2002 and 2011”.
These are the ones that they caught and disciplined by firing.  How many more have not been caught yet, or  just received a slap on the wrist, God only knows. A former agent who was busted for theft  totaling some $200,000 per year called it a “culture” of indifference that allowed corrupt employees to prey on passengers’ luggage and personal belongings with impunity.  (Pythias Brown got 3 years in prison for stealing more than $800,000 worth of stuff, or $266,666 per year.  Hell, I’ll spend a year in the slammer for a quarter mil.)

Most popular items to be stolen are high dollar, and easily concealable electronic items. Agents will also remove innocuous think they might be dangerous.   A case in point was a passenger I had in my taxi a few weeks back. He had me take him to Walgreen’s to get a prescription filled.  Enroute, he told me that he was on heart medication and the wonderful people at TSA (Terminally Stupid Assholes) removed his meds from his checked bags. Apparently, they can’t tell nitroglycerin tablets from nitroglycerin explosives.  (“Ok, everybody! I’m a desperate man!! Take this plane to Cuba, or I’ll swallow all these nitroglycerin tablets at one time and blow us all to Hell!” “I think he means it, man!!”) The pills were still in the bottles with the medication labels still on them.

Another man I had as a passenger was on a business trip, and had some nicely printed and bound brochures for a business meeting. The totally awesome and completely competent agents from TSA (Trashes Stuff on Airlines) cut open the wrapping on what were clearly booklets, then courteously taped them back together. The tape totally destroyed the covers on the booklets, and my passenger had to spend several valuable hours getting them recovered.
This is in addition to getting your genitals groped at the gates by those ever so polite and kind agents from TSA (Thieves and Sexual Assailants).  While I can’t do much about stopping one of the boys in blue from getting to second base with you, I had an idea about how to prevent your belongings to arrive to your destination, without being damaged.

I had heard a rumor, so I checked it out when I was at the airport waiting for a passenger. I walked into the baggage resolution office for Delta Airlines. It’s a quiet little office where several customer service staff try to locate lost baggage, among other tasks. The woman behind the counter was older, about 60 I would guess. She looked like she had years of experience behind the desk. She looked up at me, and said, “May I help you?”

“Yes, ma’am, “ I began,  telling her the story I had made up a few minutes before. “I am traveling to North Carolina in a few weeks, and my brother and I are going to be in a shooting match, so I have to bring my handgun with me. Can you tell me the proper procedure? I mean obviously, I can’t carry it in the carry on baggage.”

Her eyes brightened at the prospect of helping someone with a question. She smiled, and told me that the weapon had to go in my checked baggage. “The gun has to be in a proper gun case. And the weapon can’t be loaded. No bullets in it.” She smiled again. “Any bullets have to be separate from the gun, and in their own case.  Then, you have to bring the bag over to the TSA officer, and they inspect the bag in front of you.”

“So, they open up the bag in front of me, and inspect it?”

“Then they fill out a declaration form and close up the bag and seal it.”

“And no one else opens it before I reach my destination?”

“That is correct,” she assured me.

Update: I sent the URL of this blogpost to Lew Rockwell of LewRockwell.com, the best libertarian website on the intertubes, since the subject matter seemed to be right up their alley. Perhaps they would want to post it there. Mr. Rockwell  graciously answered my email query back a few hours later with a very pertinent question: “Sounds great, but you have to be flying someplace you can carry a gun, right?”

Of course, he is right. So if you decide to carry a firearm in your checked bag, make sure of the laws where you are going.

I thought about it for a bit. We cab drivers can get very creative sometimes. I placed a quick phone call to the lovely people over at Southwest Airlines.”Hey, Im going out of town, and I’m bringing a toy gun for my little cousin. Now, I know I can’t carry it in my carry on bag, and it has to be checked. But do I still have to fill out one of those firearm declaration pages for the TSA?”

“And they still go through all that nonsense about checking your bag in front of you?”

“Yes they do. For anything that looks like a real gun. Even if it is just a realistic looking toy.”

“Well, we don’t make the rules,”  I said. “Thank you so much for your help! You’ve saved me a ton of hassles.”

So my new recommendations is anytime you fly, bring your Nerf gun. Declare it. If some TSA goon says, “This doesn’t look like a real gun,” tell him that it does where you come from, and thank him for keeping us all safe.