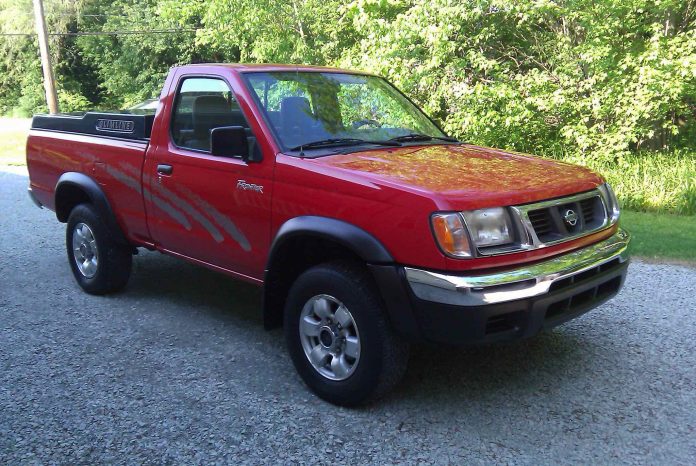 It’s not yet a “classic,” but the ’98-2004 Nissan Frontier (and other same-era compact trucks like the Toyota Tacoma and Ford Ranger/Mazda B series) looks pretty good in the rearview.

And in the garage, if you’re lucky enough to have one parked there.

Where it won’t take up too much space.

Because it isn’t Super Sized – as pretty much everything else is. You can park other things in the garage. You do not need the assistance of tugs to maneuver it into parking spaces. You can see what’s in the bed (and reach what’s in the bed) without needing a step ladder.

Manageable size is just one of the many virtues of this compact-sized pickup, which is a species of pickup no one makes anymore. Or at least, which no one sells in the U.S. anymore.

When Ford pulled the Ranger off the market after the 2011 model year, the smallest new truck you could still buy new was the almost mid-sized Chevy Colorado/GMC Canyon – and the upsized (also now-mid-sized) versions of the Frontier and Tacoma.

Those are fine trucks . . . if you don’t mind the size, the height, the price to buy and the cost to keep them up.

A regular cab (can’t buy that new, either) ’98 Frontier was only 196.1 inches long overall – or not much longer than a new Corolla – and that was with a work-viable six foot bed; many new – and much longer trucks – only come in four door “king” or “crew” or “quad” bodystyles… several of them only with short beds useless for work. 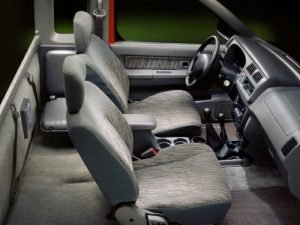 4WD has become a thing for the rich… or the in debt.

My Frontier –  a 2002 model – does not have an LCD touchscreen – or a back-up camera for saaaaaafety. It has ABS, but only for the rear wheels. No traction control, Hill Descent Control or Stability Control.

It is up to you to control the truck. 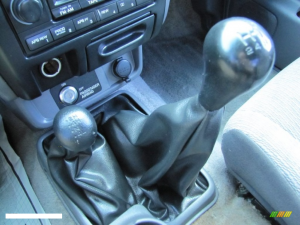 The four wheel drive (if it had it; mine’s a 2WD) would be engaged manually – via a shift lever on the center console as opposed to engaged remotely – electronically – as is pretty much par for the course, with anything 4WD new. The ’02’s instrument cluster isn’t digital. There are manual rotary knobs – not wired into a “body control module” – to adjust the fan speed and temperature settings.

These trucks have only two air bags. The new stuff usually has at least six. If someone hits your new Frontier just right – not hard enough to ruin the truck, but just hard enough to cause several of those bags to go off – your truck is doomed, economically unrepairable.

This is also part of the reason why the new truck costs so much to insure. 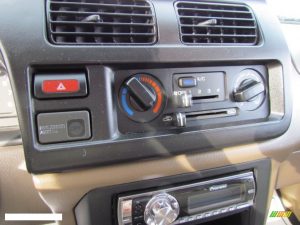 Unlike mine – which costs me about $250 annually.

In the regular/extended cab versions of the ’98-’04 Frontier, there is a factory cut-off switch for the air bag (put there because air bags can be lethal) which makes it easy to reduce your truck’s chances of being totaled Because Airbag by 50 percent. Worst case, just the one (driver’s) goes off. Probably, the truck’s sheetmetal will be economically fixable.

The ’98-2000 model Frontiers could be ordered with 4WD with the four cylinder engine. It is one reason why they cost so much less than the new stuff which – being larger and so heavier – requires the purchase of the V6 in order to get 4WD. 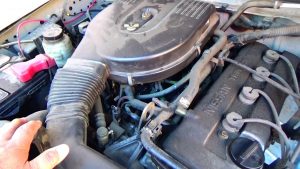 The four cylinder/4WD combo is appealing not so much because of the fuel you’ll save – which isn’t a lot – but because of the four’s simplicity and much lower maintenance costs, as well as it being much easier to maintain.

The ’98-’04 Frontier’s 2.4 liter engine only takes up about half the engine bay and the spark plugs are right on top of the DOHC cylinder head. They can be changed out in less than 10 minutes with very basic hand tools. The V6 has a timing belt that needs changing every so often – a big job that’s also an expensive job if you don’t do it yourself.

With the four, you never have to worry about that – much less pay for that. 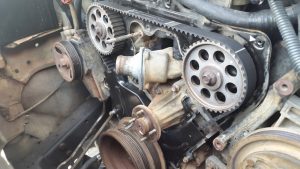 Some additional things to know about these trucks – both good and bad:

From ’98 through the 2000 model year, the Frontier still used sealed beam headlights – a godsend in deer country because when a hooved rat ran out in front of you and smashed them up, the cost to replace was only about $20 each. Beginning with the 2001 model year, all Frontiers got a new front clip and the plastic/composite headlight assemblies that afflict all new vehicles (cars and trucks alike). These may look snazzy, but they are not cheap to replace when you (or a hooved rat) break one. I found this out when a hooved rat ran out in front of my ’02. It cost less to replace the passenger side fender than it cost to buy a new headlight “assembly.” 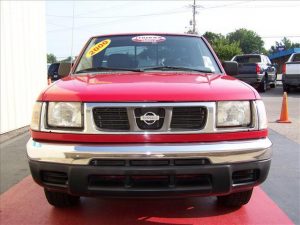 Beware, also, that the ’01 and up trucks have plastic/body-colored bumper covers instead of chrome-plated steel (thank Uncle; the cost of chrome plating has zoomed through the roof due to environmental compliance costs).

Also, the cupholders suck. They are much too shallow. They are fine for coins – not so much for coffee cups.

The 2.4 liter four, though it hasn’t got a timing belt, does have individual belts for each accessory (e.g., alternator, AC compressor, power steering pump) that have to be individually removed and tensioned manually – by adjusting a bolt in or out for each.

But on the other hand… . 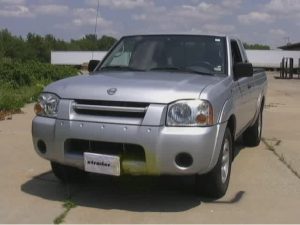 This truck’s turning radius (39 feet for a ’98 regular cab) is about four feet tighter than the new Frontier’s 43.4 feet).

Changing the front brake pads is an almost tool-free/10-minute per side job. It’s not necessary to remove the calipers. Just remove a single 14 mm bolt and flip up the top part of the two-piece caliper and remove/replace the pads. Easy peasy Japaneesy (literally).

These trucks also regularly live to Biblical patriarch age, even if neglected. Models with the 2.4 liter four especially. They’ll go 250,000 miles, easily – and (if not neglected) are often still mechanically tight.

Plus, you can’t buy anything like them new anymore.

This has kept prices of the older – and still compact-sized trucks – amazingly steady. I bought my ’02 (a 2WD, extended cab model with the 2.4  liter engine and five-speed manual transmission) back in ’08 for about $7,500.