There is an interesting species of near muscle car that came into being and briefly existed for a handful of years, beginning in the early 1970s  – just as the high tide of the real muscle car was receding. These were cars that did not come with high-powered V-8s from the factory. But which did come with V-8s that could very easily be made high-powered. The rest was already covered. They had the necessary foundations: rear-wheel-drive layout, sporty two-door styling. And they often had advantages many of the factory muscle cars of the ’60s did not, including low curb weight – and a low price tag. 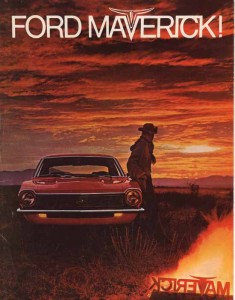 One of these was the Grabber version of Ford’s Maverick. It existed for five short years, from 1970 through 1975. It was supposed to be merely an appearance package, but soon came to be more than that. The package appeared about halfway through the Maverick’s first full year in production  in Dec. 1970 and included:

* Bench or bucket seats, trimmed in either Ruffino vinyl or Manston cloth (1972). 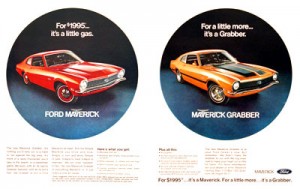 This was in addition to  neat Maverick features such as the “flipper type” rear vent windows, which could be opened outward to draw air into the car. “Select Aire” AC could be ordered, but the car’s effective ventilation system made this unnecessary.

Standard under the Grabber’s dual-dome scooped hood was the base Maverick’s 105 hp 170 CID straight six, with two larger (200 and 250 CID) sixes available as step-up options. But buyers in search of a muscle car in the rough checked off the option box for the 302 V-8, which, became available shortly after the Maverick’s launch.

It was not a Boss 302 – or even a four barrel 302 – but it was a V-8 and even better, it was a 302 V-8. The same basic V-8 that had made big power in other Ford vehicles and which only required a dusting with various factory and aftermarket performance parts to rise from its slumber. It had the potential to be a screamer – especially in a car that only weighed 2,786 lbs. – a flyweight even by early ’70s standards. (For some perspective, the “compact” 1970 Chevy Nova SS weighed about 3,200 lbs.) 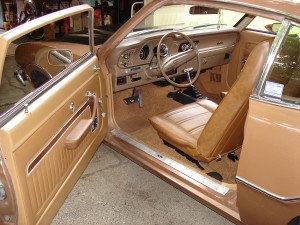 The little V-8 was factory rated at 210 hp (SAE gross) in 1970 – or about 100 hp less than the output of a healthy 302. Part of the reason for the modest output was the extremely mild camshaft – a stick designed to deliver good low-speed torque for A to B driving. It was further choked-down by its economy-intended two-barrel carburetor and a very restrictive single exhaust system. Restrictive, not because of catalytic converters – these would not be an issue until 1975 – but rather because the super-tight packaging of the Maverick did not allow for factory dual exhausts or even a decent-diameter single exhaust system.

The Grabber’s 302 left the factory constipated – but this proved to be a blessing in disguise.

As far as the government – and insurance companies – were concerned, this was an economy car. Not a performance car. It could, therefore, slip under the radar. It was cheap to buy – and even more important, it was cheap to insure – unlike an out-of-the-closet muscle car. And once the keys were in your hands – and the car in your garage  . . .  .  A weekend and a few hundred bucks later could – and often did – transform the 302 into a ferocious performer. And no one except you – and those you smacked down on the street – would ever be the wiser. 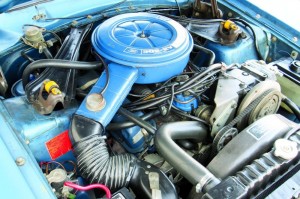 Even without changing cams, simply swapping out the stock two-barrel intake and carb for a four-barrel intake and carb, diddling the ignition timing to more performance-favorable calibrations – and installing what was known back in the day as a “bang plate” (shift kit) in the three-speed automatic (most of these cars came through with automatics) really woke the thing up. I can vouch for this personally, having helped so modify a ’73 Grabber this way. We also managed to install a proper dual exhaust system – it takes some work, but it is doable – and changed out the economy-minded ring and pinion for a more aggressive set. The effect of these tweaks was like jumper cables on your nipples in January. The otherwise stock 302 – never opened up, with its factory low-performance camshaft in place – easily barked the tires on both the 1-2 upshift and the 2-3 upshift at WOT.

Remember, this car only weighed about 2,800 pounds. 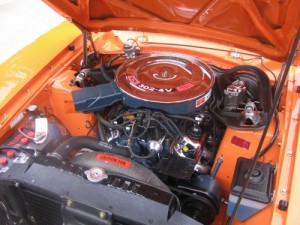 This was part of the Maverick’s genius. It was incredibly affordable, yet it wasn’t a bottom feeding basic transpo unit like many of its competitors, especially those from Japan. You could get a V-8, after all. You could also get AC. And in addition to the Grabber package, there were almost as many a la carte options for individualization of each car as the 1964 Mustang had offered. In fact, the man responsible for the ’64 Mustang was trying to recreate history by reviving the same basic idea  – fun, affordable, personal –  behind the ’64 Mustang. In  1969, then-Ford Vice President Lee Iaccoca told Time magazine: “You dumb foot draggers — you in Detroit — what took you so long to know imports were going to hit a million? Now the market is damn well defined, and you know what the market says? ‘Give me a hell of a good buy for two grand, will you? ‘ “ 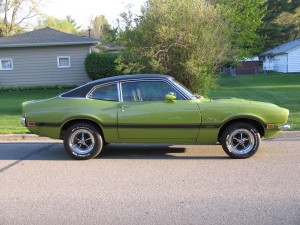 Thus was born Ford’s answer to the imports – among them, VW’s hot-selling Beetle.

But like the four-cylinder econo-boxes from Japan, the four-cylinder-only Beetle could never even dream of being a muscle car, while the Maverick – in Grabber trim – could be one with just a little bit of work, most of it backyard mechanic doable with basic hand tools.

There were only two really significant issues with the Maverick, from the standpoint of high-performance. First, there was no limited slip differential option – and the most aggressive factory gearing was 3.08 (most Grabbers came through with a burnout-unfriendly 2.79 ring and pinion). Second, while a manual transmission was available, it was only a three-speed manual. If you wanted a factory four-speed car, you had to move up to a Mustang. 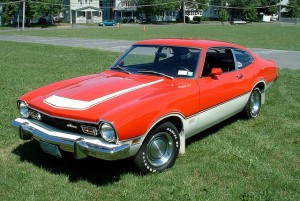 And there were incidentals – such as the absence of a factory-available tachometer or “rally” gauge cluster. You got a speedo, fuel gauge and a few idiot lights.

Even so, the Grabber was still a low-bucks way to get into a brand-new RWD/V-8 performance car – or at least, a RWD car with a V-8 that could be made into a performance car. Even by  1974, with inflation eating away at everything – by causing the prices of everything to rise – the Maverick’s base price was still just $2,591. With the Grabber equipment, the V-8 and AC, the out-the-door price was in the neighborhood of $3,400 – just under $16k today.

Not everyone could afford a GTO – or a Mustang. As much then – as now. Cars like the Maverick Grabber gave buyers who wanted something more than an import econo-box but which was still priced about the same a real alternative. Something they could work with.

In 1973, the Maverick lost its dual-dome scooped hood – but since the scoops had never been functional anyhow, there was no loss in performance. What did hurt the Grabber’s performance was creeping curb weight – up to 2,957 lbs. by ’75.  The additional beef was seen as well as felt. The 1970 model’s aesthetically appropriate thin-line bumpers (available with twin vertical bumperettes) were replaced – also in ’73 – with a set of massive-in-comparison “energy absorbing” bumpers easily three times their size. 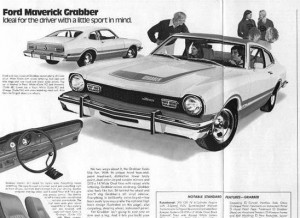 All the cars of the period were similarly afflicted – and if you wanted to identify the moment in time when external forces (the government and insurance mafia) were consolidating their death grip on the American car industry – the moment at which these forces and not consumers would determine what kinds of cars would be allowed on the market – it was the dread year 1973. “Unilock” seatbelt buzzers and ignition interlocks were mandatory standard equipment – and catalytic converters were less than 24 months down the road. The buzzers would go away for awhile – then return to afflict all new cars to this very day. Catalytic converters, of course, never went away. We just got more of them (most new cars have at least two and many have four or more).

Ford discontinued the Grabber package after the ’75 model year. The Maverick would live on for another two years. During these final two seasons, Ford gamely tried to keep the idea alive.  A Stallion package that offered many of the erstwhile Grabber features appeared – very briefly – in 1976. It also had a sporty exterior/interior – and could be ordered with the 302 V-8 as well as Lacy Spoke aluminum wheels – which had never been available with the Grabber. But by ’77, the gig was up. Maverick was cancelled – and both the Grabber and the Stallion were automotive history.

The Maverick Grabber and Stallion (as well as their Mercury Comet equivalents) and a number of other almost muscle cars built during the early-mid 1970s like the Oldsmobile Rallye 350, the “Heavy Chevy” Chevelle, the Buick Apollo, the Dodge Aspen R/T, etc.,  are today perhaps  the only not-yet-mined repositories of affordable old-school RWD/V-8 performance.  Cars of a type that will probably never be made again. 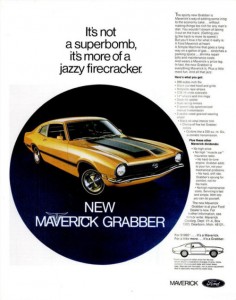 Good luck finding a factory-built muscle car  – that still runs or with a body not Swiss-cheesed by rust –  for anything near that.

Nearly four decades after the last one left the line, the Grabber’s appeal continues to increase. As they were when they were new, these cars are a performance bargain – and potential wolves in sheep’s clothing.