If you go new car shopping, your main worry is price. You don’t have to worry about the particular car. The red one sitting next to the silver one that’s parked next to the yellow one on the dealer’s lot . . . they’re all the same. It doesn’t really matter which one you pick – other than colors and options. 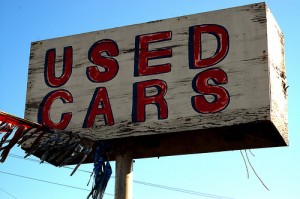 And, of course, the price.

With a used car, it’s exactly the opposite.

A given used car is an individual – distinct from the thousands of others of the same make/model that rolled off the line that year. It was driven differently – and maintained differently. It may have been babied – or it could have been abused. No two examples of  a given make/model/year used car will ever be the same as far as their mechanical and cosmetic condition, the miles on the clock, the stains on the seats or the intervals at which necessary service (such as oil and filter changes) was performed.

Condition – rather than price – is what matters most when used car shopping.

Unfortunately, condition involves variables and subtleties that make haggling over new car prices seem like a cakewalk. Most people know about dealer invoice vs. manufacturer’s suggested retail price – and how to research dealer incentives and all the rest of it. It’s not rocket science; the info is available and it’s all pretty straightforward – being just numbers. 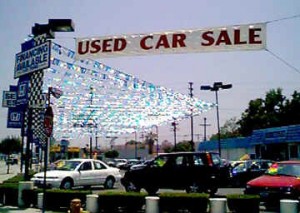 But how do you determine whether the used vehicle you’re looking at was ill-treated by its previous owner? Whether high-quality service parts were used – or the cheapest no-name crap on discount at Wal-Mart? Dealers (and even private sellers) can cover up stuff better than Lady Gaga’s make-up people. And once you’ve signed the contract and handed over your dollars, any problems are now your problems – because in most states, there is no warranty implied unless it is specifically stated. Sales are generally considered “as is” – unless there’s something in writing asserting or promising otherwise. Telling the small claims court that the seller told you there were no problems with the car will usually cut no ice. And, to be fair to the seller, he may not have known about the problem that cropped up after the sale. It’s a used car. Wear and tear. Bad luck. Stuff can – and does – go wrong. That’s why the standard in court for pursuing a successful claim against a seller is usually pretty high. In most cases, you’d have to substantiate willful, knowing misrepresentation. Absent that, it’s your car now – warts and all.

Scared yet? That’s a good state of mind to be in when shopping used cars. I like to compare it with my personal policy when riding a motorcycle: Assume every driver is deliberately trying to kill you. A little precautionary paranoia in dicey situations can save you a lot of trouble. All right. So, how about some practical used car buying advice?

* Try to stick with popular models – 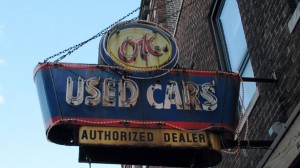 This may seem counterintuitive, because popular often means pricey. However, popular also tends to mean good. If lots of people are buying a given make/model/year vehicle – and prices are strong – it strongly suggests that make/model/year vehicle is a good vehicle. Personal case-in-point: I own two of the last-generation (1998-2004) Nissan Frontier pick-up truck, the generation before this model got up-sized to mid-sized  from compact-sized. I paid the same money in 2011 for my 2004 that I paid back in ’04 for my ’98. The value of these trucks has held strong – because they’re known to be sturdy little trucks that are very hard to hurt, even if you try to. Mid-late 1990s-era Toyota Corollas – and all Mazda Miatas – are two more examples of known-good cars that were made in the millions.

It’s still important to vet the particular example you find – but being able to fixate on a certain make/model/year helps a lot. And if it’s popular, it’s likely you’ll have lots of examples to choose from – another advantage of going for a well-liked car. And parts – especially trim parts – will likely be available for longer. 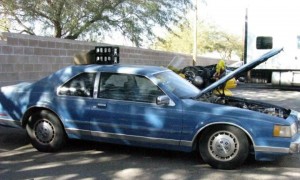 The reason being, luxury cars tend to be equipped with expensive to repair/replace features and equipment. I’ll give you another personal example. I once owned a late 1980’s vintage Lincoln Mark VII LSC. This car had an air-adjustable, self-leveling suspension that altered the car’s ride height up or down automatically. Neat feature – when new and under warranty. But really expensive when not.  The air shocks at each of the car’s four corners were prone to leaking as they aged – and each one cost (this was in the early ’90s) $1,200 to replace. If you didn’t replace them, the car’s body would collapse onto the tires like a California low-rider. It may be tempting to think about treating yourself to a used luxury car that only costs a third of its price when new. But there’s a reason why used luxury cars are often put up for sale at too-good-to-be-true prices.

The same extra caution – and due diligence – should be exercised when shopping a used performance car. For obvious reasons, they are more likely to have been run hard – and put up wet. Be even more cautious about turbo (and supercharged) performance cars.

* Educate yourself about high-dollar routine service – 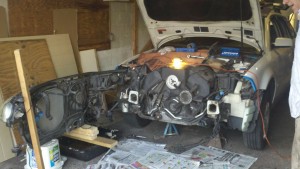 For instance, timing belt changes. Many recent-era cars equipped with overhead cam (OHC) engines require this job – and it’s a big, expensive job – at regular intervals, just like oil and filter changes. Only $800-plus for the timing belt vs. $30 or so for the oil and filter. It is not at all uncommon for the original owner of such a vehicle –  well-aware of the impending bill – to trade the car in (or sell it) just before the mileage/time interval comes due for the big-ticket repair. Leaving you to deal with it.

Related: Be very wary about “lifetime” items such as spark plugs and engine coolant. It’s absolutely true an engine so equipped can run well for 100k-plus with its original, factory-installed spark plugs – and even its original coolant. But “lifetime” doesn’t mean forever. If you buy a high-miles used vehicle, try to determine whether “lifetime” items have ever been replaced. Because if they haven’t been at some point, it’s likely going to be up to you to take care of it. 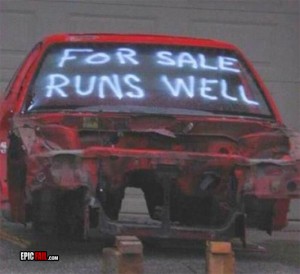 * Be absolutely certain everything works before money changes hands, or be prepared to pay to get it repaired yourself –

Check that all turn signals, brake lights and so on operate properly. That every dashboard warning light comes on when the ignition key is inserted – and turns off once the engine’s running. Do all the gauges operate properly – and read normally? Pay particular attention to oil pressure, temperature and voltage gauges. Weird readings, too high readings – or too low readings – are reasons to say sayonara.

If it’s winter, do not forget to turn on the AC. Be sure it blows cold. Operate every control – windshield wipers, defroster, cruise – and make sure you know they’re working. Or not. If not, find out why – and before you proceed any farther down the road to buying the thing.

If the car is being sold by a private party (not a dealer *) do not buy it before it has passed both emissions and state safety inspection – in areas where either is required to register a car for the first time, or renew registration. If the yellow “check engine” light comes on – and stays on – it’s a red flag. At the very least, it means trouble codes stored in the computer’s memory must be cleared and the system re-set. And the light will just come back on again – and you’ll fail smog check – if the underlying problem isn’t found and corrected.