The Chevy Corvair has something of a bad reputation – among those who don’t know much about it, anyhow. Arguably GM’s most daring (and technologically advanced) car of the 1960s, it fell victim to a combination of bad press – and bad timing. 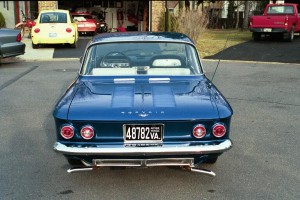 As a six-cylinder car in an era of big V-8s, it got lost in the horsepower shuffle of the original muscle car era. And as the target of uber ambulance chaser Ralph Nader, it wound up being tarred with an unfair reputation for being an evil-handling, “unsafe at any speed” car.

But the real story of the Corvair is the story of of America’s first all-unibody (integral body/frame), aluminum-engined/air-cooled mass production car – a machine that earned industry-wide praise when it appeared in late 1959 as a 1960 model, sold in big numbers for awhile. but which was fated to retire just nine years later, in 1969 – its passing almost unnoticed.

The original 1960 model was conceived as an upmarket alternative to the popular but primitive (even then) VW Beetle and other small economy cars of the time. Despite some design similarities (rear-engine/air cooled) it was a much more refined and arguably better-executed car than the Beetle – which by the early ’60s was already pushing 30 years old. It was also remarkably different than anything on the road bearing a Ford or Chrysler badge.

Work on what would eventually become the Corvair began in the latter half of the1950s under the supervision of Chevrolet Chief Engineer Ed Cole. Cole loved airplanes, so it’s not surprising the Corvair’s powerplant would be similar to engines used in light aircraft: an air-cooled flat six, with individual cylinder barrels and a divided crankcase. Nothing like it had ever been considered for a U.S.-branded mass production vehicle  by GM or any other major American automaker. 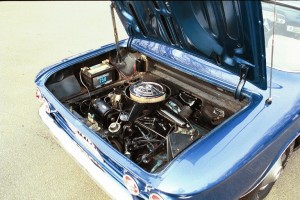 Even more unconventional for an American auto was the engine’s location in the rear of the car – “where an engine belongs,” as Corvair ads would later claim. A rear-mounted aluminum transaxle was fitted to the engine (manual three speed or two-speed Powerglide automatic), with drum brakes all around. Power steering was not deemed necessary – because the front end of the car was so light.

Since it was conceived as an economy car, the first-year Corvair’s interior furnishings were basic – and the options list minimal. However, the car was roomy and pleasant -especially the back seats, which were people usable (unlike the VW’s). There was also a good-sized trunk up front and a very effective system of manually operated vents that kept the car comfortable in both warm and cold weather driving.

Since there was no radiator up front, there was no need for a traditional grille; engine cooling was provided by louvers on the rear decklid – and a belt-driven fan with a strange-looking 90-degree pulley system you’d swear couldn’t possibly work – but did. There were two single barrel carburetors – one for each bank of cylinders – fed by a single air cleaner with two “arms” that extended to each carb’s throat. A cable ran from a lever on the transaxle to the front of the car, where it hooked up to the gas pedal. Air was expelled at the rear of the car, where a  warm breeze cascaded out of a trim vent below the rear bumper.

The standard 140 cubic inch flat six originally developed just 80 hp in the standard 500/700-series ‘Vairs – which wasn’t much compared with the V-8s one could buy in more traditional cars. But it was significantly more impressive than the Beetle’s feeble (40-hp) four – and delivered sprightly acceleration in the 2,270-lb. car. It was capable of comfortably maintaining 70 MPH – a speed the Beetle struggled to reach and had trouble maintaining. 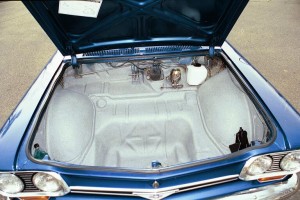 The Corvair’s heater worked, too – another selling point over its German rival.

Introductory year 1960 models bowed in base 500 and slightly spruced up 700 trim lines, in either coupe or sedan bodystyles. Base price was just under $2,000 for the 500 coupe.

A station wagon model would appear in ’61 – the Lakewood – along with the “forward control” Greenbrier van and a Rampside pick-up derivative.

Toward the middle of the 1960 model year, Chevy brought forth a sporty version of the Corvair coupe called the Monza.

The appearance of this model – which featured a higher-horsepower version of the 140 CID flat six (tuned to 95 hp), low-back bucket seats, floor shifter (with four-speed transmission beginning in ’61) and brushed aluminum trim accents – quickly caught on among enthusiast drivers, who called it the “poor man’s Porsche.” More importantly, perhaps – given the times – the Monza helped boost Corvair’s image as something more than just another economy car. 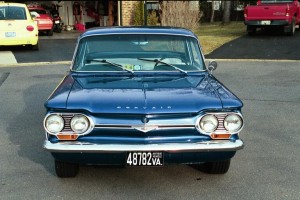 In ’62, Chevy would raise the stakes even higher by offering a turbocharger (with single carb) as optional equipment for the Monza – which became the Spyder when so equipped. The $317 option boosted the output of the little six to 150 hp and was part of a comprehensive performance package that also included such mandatory options as a 4-speed manual gearbox and heavy-duty brakes with sintered metallic linings – bringing the total price for a ’62 Spyder coupe to $2,600. Buyers also got a gauge package with tachometer, brushed metal trim and more aggressive final drive ratio. Wire wheels and a wood steering wheel were popular dress up options.

It was the spunky little Monza, more than any other permutation of the Corvair, that assured the little Chevy’s place in history – as well as helped seal its eventual doom. What had been conceived as a basic (but technologically advanced) economy car was fast becoming a sporty car – and being driven accordingly. The problem was that the rear-engined Corvair had a tendency to throttle oversteer if driven too fast into a corner – and would become uncontrollable if the driver made the mistake of lifting off the gas instead of hammering it through the curve. This inherent problem was made worse if the manufacturer’s recommendations for tire pressure (15 psi up front, 26 for the back tires) was not adhered to scrupulously. The same handling quirk was a fact of life for early Porsche (and VW) drivers, too – as these cars used a very similar swing axle suspension design. But in the Corvair, it became an issue as a result of a combination of mass production and inexperienced drivers – neither of which were ever much of a concern for Porsche. (VW drivers, on the other hand, tended to drive conservatively – and besides, there was no performance version of the slow-pokey Beetle – a fact that kept things in check.) 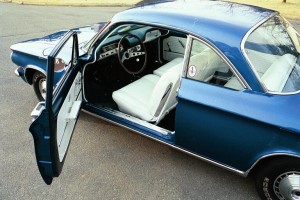 In a decision GM would come to regret, early (1960-’63) Corvairs were not fitted with a simple $4 per car transverse rear leaf spring – which would have helped to idiot proof the Corvair’s swing-axle design. In 1964 – the same year the flat six was punched out to 164 cubic inches (with power in the base car jumping to 95 hp and 110 in the non-turbo Monza) Chevy belatedly added the single transverse rear leaf to tame the car’s tendency to oversteer when pushed too hard by an inexperienced driver. The fix worked – but it was like trying to back up the Titanic after it hit the iceberg; the damage was already done. And could not be undone.

A series of high-profile wrecks – including one involving comedian Lenny Bruce – and the subsequent agitation of  Nader – laid the foundation for Corvair’s reputation as “defective” – and “dangerous.”

Chevy reacted with a complete revamping of the entire Corvair for 1965 – including a sleek new body that was almost universally applauded for its attractive, clean lines. A new 140-hp Corsa coupe appeared – with turbo power optional and output up to 180, almost twice what the first Corvair mustered.

Bill Mitchell – the GM designer who helped create the ’67 Camaro – was very much involved in the exterior styling of the ’65 Corvair. It was less ornate, less boxy than the original model – and seemed to finally be coming into its own as an American sports car. Under the skin, the ’65 also boasted a totally new suspension – centered around a Corvette-style fully independent rear that should have put to rest any lingering public concern about the car’s handling tendencies. 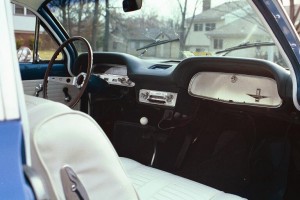 Unfortunately, it was not to be.

Despite the gorgeous new body and superb handling conferred by the ‘Vette-based IRS suspension system – Corvair sales began to droop alarmingly, especially after 1966. But it wasn’t primarily due to Ralph Nader’s evil little book.   (Litigation over the car would actually outlast Corvair production, with Congress finally holding hearings on the matter in ’72 – three years after Corvair production ceased in 1969.)

More than anything else, what ultimately killed the Corvair was bad timing. Despite the turbo engine’s jump to 180-hp in ’65 (140 hp in the next-down model – which featured a wild-looking four-carburetor induction system) – it couldn’t compete with the explosion of high horsepower muscle cars that had erupted after the 1964 launch of the Pontiac GTO – or the nuclear afterglow of Ford’s luminously successful Mustang, which also bowed that year. Gas was cheap – and the coming-of-age youth of the 1960s wanted cubic inches and big burnouts – not the Euro-style balanced performance the Corvair was trying to sell.

Meanwhile, the car was being out-priced (and out-optioned) on the lower end by more conventionally designed small economy cars from Ford and Chrysler, including the Falcon, the Dodge Dart and others. GM had invested enormously in the unusual tooling and other things necessary to build the Corvair – none of which was shared with other GM models. It was becoming clear at the company’s Detroit headquarters that the outlay wasn’t going to be recouped. Internal memos later revealed to the public show GM management decided to cut its losses very shortly after the introduction of the all-new ’65s. Changes would be minimal over the next four years – and by the final year, production decreased to a trickle. 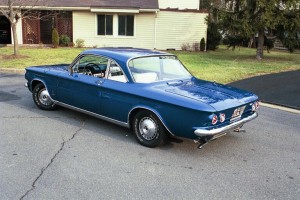 The irony of it is that had the second-generation Corvair been launched just six or seven years later – without the baggage of the first-generation Corvairs, with the sexy new body and Corvette-esque IRS –  and right in the middle of the first OPEC energy crunch – it almost certainly would have been a huge sales success. Nimble, attractive – and great on gas (at least, relative to a V-8 muscle car).

It would have been a no-brainer. And it might have helped GM beat back the devastating onslaught of import compacts from Japan that ate into its market share like Luciano Pavarotti digging into a stromboli.

As it was, GM got burned so badly by the experience – and by Nader’s relentless hair-shirting – that it shied away from producing anything remotely imaginative for many years after the Corvair’s cancellation in 1969. Instead of trying new things, it would produce functionally competent but future beer can fodder like the Chevette and Vega and Nova – leaving it to the Japanese to produce interesting (and fun to drive) small cars.

This is the true legacy of Ralph Nader. Anyone who owned a Corvair (especially the ’64s – and the second generation ’65-’69models) knows the car deserved better.

And could have been so much more.