Back in the ’80s, you may have had to “Drive 55” on the highway – but in other ways, things were pretty damn good. At least, a lot better in a number of ways than they are now. For instance, you could: 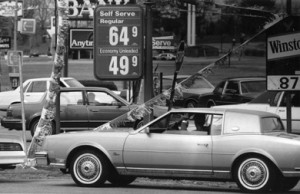 Imagine that! Unleaded regular for about a buck a gallon. Premium  – without ethanol –  for a few cents more.

Nowadays, there is no way you’re driving a V-8 muscle car as a high school kid – period  – unless someone else is paying the gas bill. Most adults working full-time can’t afford to feed (or even buy) a V-8 muscle car. 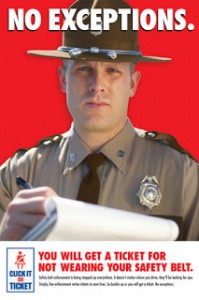 So, it’s four cylinder Civics with fart can exhaust for the kids – and FWD V-6 Camrys for Mom & Dad.

* Electronic voices may have told you, “the door is ajar” – but costumed goons didn’t threaten you with guns to “buckle up for safety.”

The state was not your mommy – or your wife – not yet. It actually left you alone – for the most part – unless you had committed some sort of external violation. Something that at least plausibly (however thinly) could be argued impinged upon the rights of other people.

You could ride in the bed of pick-up trucks – and hang a shotgun rack loaded with actual shotguns (loaded shotguns) on the back window of your pick-up truck and no one batted an eye. Much less any worries about being thug-scrummed by a dozen black-clad Ninja cops fretting “officer safety.”

You could “sleep it off” in the back seat – and cops would not only leave you alone, they’d commend you for being responsible.

Today, Big Brother is married to Big Momma – and we have been reduced to a sort of second childhood, enforced at gunpoint.

* It was still legal to have an open beer on you – so long as you didn’t have too many beers in you. 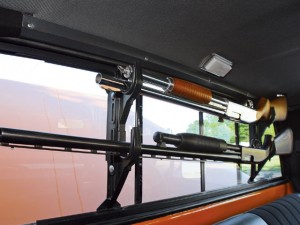 Drunk driving was illegal – but you weren’t considered “drunk” simply because you’d had a beer. Either in your belly – or in your hand. These days, you will be crucified without mercy if caught with an open beer in your hand while driving – even if you’ve only had a few sips and even if a single beer cannot possibly render you “drunk” – even by today’s demented standards – under the law.

Today’s cars – including economy cars – are much quicker (and faster) than the cars of the ’80s. The problem is using that capability. In the ’80s, a good radar detector made you almost invulnerable. Today, cops have instant-on radar as well as laser – which neutralizes the advantage of having a radar detector. By the time it alerts, you’re already caught.

And of course, there are automated speed cameras today. These didn’t exist in the ’80s.Or even the ’90s – mostly. (When I worked in DC in the mid-1990s, I routinely banshee-ran down Constitution Ave at warp speed; do that today and you’d find your mailbox stuffed with payin’ paper a week later.)

Also, the consequences if you did get pinched weren’t as over-the-top and punitive as they are today. Mostly, you just had to deal with a relatively small fine and maybe some DMV rigmarole. Today, the fines are not small – in part because of all the add-on “fees” (such as “contributions” to the state’s “safety awareness” program). Some states will slap you with several hundred dollars in fines over a simple speeding ticket. And mere speeding can, in several states, very easily become statutory reckless driving – a huge bust with life-changing consequences. It has sapped the fun out of driving – and cowed the populace into submission. Even if you want to drive fast, it’s often hard to drive fast because everyone else is driving at a snail’s pace – out of fear of The Man. 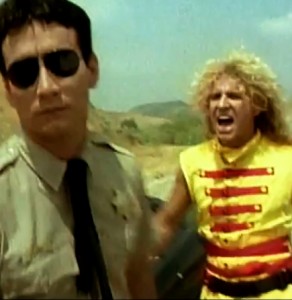 * Burnouts were possible – in almost any car.

By the start of Reagan’s second term, RWD cars were going away – and FWD cars were coming online – but interventionist traction control was still years in the future. If you felt like spinning the tires, you could spin the tires. Maybe you had to dump the clutch – or power brake it, if the car was automatic. But lay rubber you could. Today, it’s often hard to squeal the tires – even in a powerful V-8 RWD car – because the computer doesn’t want you to. Even high-performance cars must be “safe” and “controlled.

Which makes them a helluva lot less fun.

That meant (among other things) when you were in your car, you were incommunicado. A respite from work – and people, generally. If you spent an hour or two in the car everyday, it was your time. Not time to be “reachable.”  People – adult people – also necessarily spent more time driving than gabbling like teenage girls over the latest Twilight movie.

It was a better world. 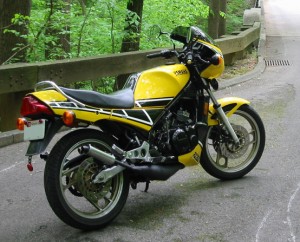 Engines that burn oil on purpose. While the feds had cut the nuts off most cars by 1975 – the year catalytic converters became mandatory – bikes were still wild (and thus, free) well into the ’80s. RD (and RZ) 350 Yamahas, still smokin’ – brand new – when it was “morning in America.” You could buy leaded regular gas, too. And diesels – though slow (and smoky) – were also economical – and affordable.

Well, not on the road. 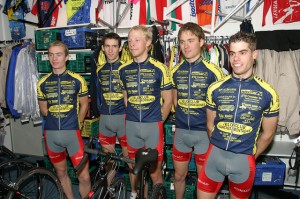 David Lee Roth may have worn skintight yellow leotards, but cyclists generally did not. The “live strong” cult – and its lurid ball-hugging/package-displaying accoutrements – were still a few years yet to come.

If you rode a bike back then, you probably wore cut-off shorts and T shirt.

And no one insisted – at gunpoint – that you wear a helmet.

Why Are Power Windows Allowed?