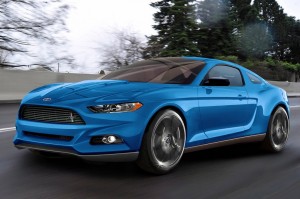 Mustang people will recall the hollow point bullet that was dodged back in the early ’90s when Ford almost ruined the iconic RWD American pony car. By turning it into an import-style FWD car. That car, by the grace of Elvis, ended up being sold as another car – the Probe – and in 1994, Ford brought out a new Mustang that harkened back (stylistically) to the original ’64 Mustang – and which was based on the same  solid axle/RWD layout. But Ford management had given serious thought to slotting in the the Probe as the “new” Mustang.

But apparently, management is thinking along those lines again.

There is a rumor floating around that the 2015 Mustang will be based on a “global platform.” What that means (if true) is that the ’15 Mustang would be made for the global market – not the US market. And that could mean, probably will mean, FWD – and four cylinders. With maybe a transversely mounted, turbocharged (“EcoBoost”) V-6 as the optional powerplant. Maybe teamed up with AWD.

RWD platforms and V-8 engines are only mass-market viable in the US market. In Europe, chiefly because gas costs about $10 a gallon, RWD/V-8 cars are exotic cars  – and for the rich only. The only conceivable way a Mustang could make it in Europe as other than a high-dollar/low-production exotic would be if it got smaller, lighter – and much more fuel-efficient. The easiest, most cost-effective way to do that would be to eliminate the separate rear axle assembly – and change the layout to FWD. 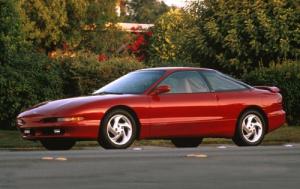 Then they could also get rid of the V-8 and replace it with a six – and make a small four the standard engine. Problem solved.

The current (2013) V-6 Mustang rates 19 city, 31 highway – 23 MPG, average. The V-8 GT comes in at 18 city, 25 highway – 20 average. That won’t cut it for the US market – which three calendar years from now and just two model years from now (2016) will require all new cars to average 35.5 MPG   or be saddled with onerous “gas guzzler” fines that will be passed on to the buyer. Already, even higher-end brands are divesting themselves of six cylinder engines, slotting in smaller – more fuel sippy – fours in their place. V-8s are rapidly going the way of the Dodo. As 2016 gets closer, this shift will become more and more obvious as more and more cars get shorn of engines over 3 liters and with more than four pistons under their hoods.

The current Mustang’s mileage will have to be improved by something on the order of 50 percent just to make the 2016 CAFE cut. And even that won’t cut it in Europe – where 35.5 MPG is mediocre.

For some perspective on what sells in Europe, consider a car like the Euro-spec VW Jetta, which is sold with a 1.6 liter diesel not available in the US. It manages 50-plus MPG (60 on the highway) as good or better than the best hybrids deliver on this side of the pond. To match that at-the-pump performance, the next Mustang’s mileage would have to double relative to the current car’s mileage. 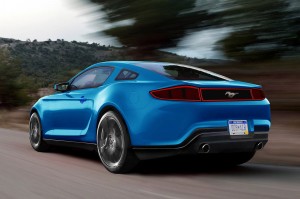 But it’s not just European realities that cast a pall over the future of a RWD (and V-8 powered) Mustang for 2015. Forget the gas guzzler taxes.People over here are freaked out about the cost of gas.

The current Mustang has a fairly small (for a car of this type) 16 gallon fuel tank. At current prices – about $3.80 nationally – it takes about $60 to fuel one up. What happens when  – not if – gas prices climb to $5 a gallon? Whether because of inflation or oil shortages or “save the Earth” taxes on gas – the reasons why don’t matter.  What does matter is that fewer and fewer people can afford to spend $300 a month on gas (and that’s at current prices) on top of a $400 a month car payment. On top of $100/month for mandatory insurance… .

You can rest assured Ford is thinking hard about all this. 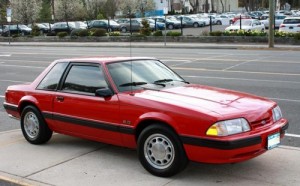 Another thing Ford is probably thinking about is changing demographics. The crowd that buys Mustangs – and other large, RWD muscle coupes – is mostly an older crowd. Gen X, Boomers. .

The crowd Ford knows is the future (Millennials ) is a crowd that grew up with – and so which is more comfortable with – smaller, lighter, FWD cars. As kids, they drove Corollas and Civics – not two-ton RWD V-8 muscle cars. If Ford (and GM and Dodge) continue with the RWD/V-8 layout, they may find themselves stuck with an aging –  and not growing – buyer demographic.

These factors – the need to expand the next Mustang’s market beyond the borders of the US, the pressure to meet 35.5 MPG average CAFE and changing buyer demographics – could very well lead to the end of the Mustang as we have known it. And to a new kind of Mustang as we might have known it back in ’94. 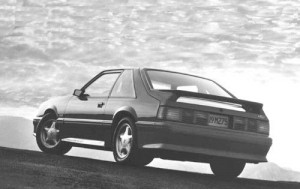 At minimum, a four-cylinder turbo’d (“Ecoboosted,” in Ford-speak) base model 2015 Mustang is very likely. That by itself might not be a bad thing. Mustang people will recall that during the ’80s and into the early ’90s, the base Mustang came with a four cylinder engine. If Ford sold say eight four cylinder, (and 36 MPG) Mustangs for every two 28 MPG V-8 GTs, the CAFE numbers would balance out.

But, a problem: The ’80s-early ’90s era Mustang was a much lighter car that could get away with being both four cylinder-powered and RWD. A 1990 LX with the four weighed 2,827 lbs. The current (2013) base V-6 Mustang weighs 3,501 lbs. and is probably much too heavy to be powered by a four cylinder engine. 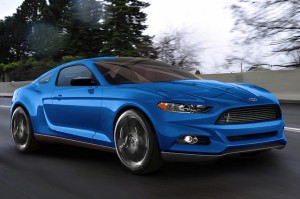 To be four-cylinder-viable, the 2015 Mustang will need to be much lighter – on the order of 300-500 pounds lighter. Obvious solution? Get rid of the rear axle assembly – and make the car FWD. Then the four could possibly work. And a turbo-Ecoboosted V-6 could maintain the necessary performance level for the GT model while also achieving the necessary CAFE numbers.

But will this car – a euro-import style FWD/AWD car with no V-8 option – be a Mustang? Would such a car sell to Millenials?

Or just turn off Gen Xers and Boomers?