Function matters – but form does, too. Especially when you’ve got a choice. 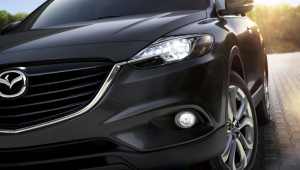 Full-size minivans, for instance, sold in big numbers  . . . until less stodgy-looking (and driving) alternatives – same-size (or almost same-size) crossovers – came on scene. Today, some of the biggest names in the business don’t even sell a traditional full-size minivan. That includes Mazda, which ditched the MPV minivan back in ’06.

Instead, it sells the CX-9.

Like other large crossover wagons, it has three rows and room for a large family – and a family’s stuff. But unlike a traditional minivan, it doesn’t make you feel like putting a shotgun in your mouth and putting an end to your pain. 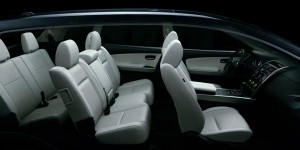 The CX-9 is an almost-full-size, seven-passenger end-run around traditional minivan ownership. It is slightly smaller inside (and outside) than the eight-passenger Chevy Traverse, but roomier inside than the slightly bigger on the outside Ford Flex – and much, much sportier-driving than both of them.

It is also larger – and roomier – than the just-redesigned Hyundai Sante Fe, which is the closest thing to it in terms of driver engagement – if not in terms of price.

The CX-9 comes standard with V-6 power and either front-wheel-drive or (optionally) all-wheel-drive. 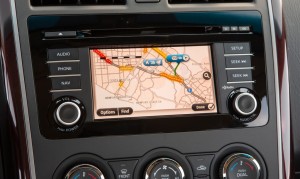 However, that version of the new Sante Fe is only a five-passenger dea. The larger, seven passenger Sante Fe starts at $28,350.

The ’13 gets a new front clip and other exterior styling tweaks, as well as Pandora Internet radio and a revised LCD display screen.

Much more space inside than Ford Flex – and also the just-redesigned (2013) Hyundai Sante Fe. 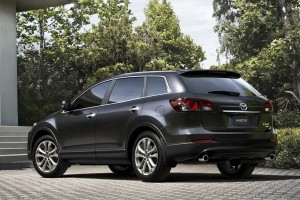 Hyundai Sante Fe is sporty, too – and costs almost $5k less to start. If you can live without the third row… .

Less room inside than Chevy Traverse.

The CX-9’s standard 3.7 liter, DOHC V-6 produces 273 hp, which is a bit more than the Ford Flex’s standard 262 hp V-6  and a bit less than the Chevy Traverse’s  standard 281 hp V-6. Both the Flex and the Traverse offer more powerful optional/upgrade engines (355 hp for the Ford, 288 for the Chevy) but the CX-9’s performance is still very good relative to the standard-engined iterations of these two: zero to 60 in about 7.3 seconds (FWD version) vs. 8 seconds-plus for the base (FWD) Flex and Traverse. This isn’t surprising when you compare the curbs weights of these vehicles: 4,637 lbs. for the Flex, 4,647 for the Traverse – vs. 4,317 for the CX-9. Even the much more pricey Flex Ecoboost – the one with the optional twin-turbo 355 hp engine that starts at almost $44k – only runs mid sixxes to 60. 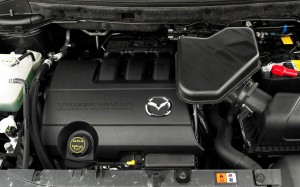 The big threat to the CX-9’s established supremacy as the least-beefy (and so most zippy) of the large crossovers is the all-new Hyundai Sante Fe. It only weighs 3,946 lbs. – and offers an almost-as-strong four cylinder engine (turbo’d) that produces 264 hp that gets it to 60 only about a half second behind the FWD CX-9  . . . and dead even with the slightly slower AWD CX-9.

Hyundai also offers an optionally available 290 hp V-6 in the new SF – and given an almost 20 hp advantage and 300-plus pounds less curb weight, the V-6 Sante Fe ought to be the quickest contender of the bunch. Its EPA numbers aren’t shabby, either 18 city, 25 highway for the FWD version and 18/24 with AWD. 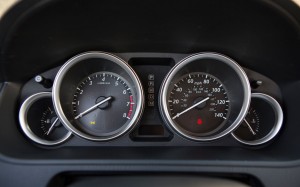 To be fair, the gas mileage of all these vehicles is pretty awful. That goes for the four-cylinder SF, too. Even with its much smaller (2.0 liter) engine, it only musters a best-case 20 city/27 highway (with FWD), which is only marginally better than the FWD CX-9’s 17 city, 24 highway. In real world-driving, the V-6 CX-9 might even do better than the turbocharged four-cylinder Hyundai because it won’t be working as hard to keep it all moving.

Worse, yeah – but not by much. But, you do get a much better-handling vehicle (more on that in a minute) and for normal-use, on-street driving, FWD is better than RWD . 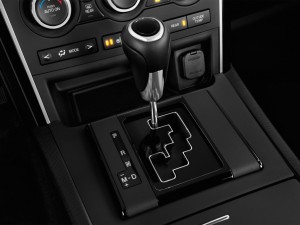 And AWD is better than 4WD – on dry/wet pavement – and can be just as tenacious on snow-covered pavement, too.

The CX-9’s standard transmission is a six-speed with manual/automatic modes. Fifth and Sixth gear are both overdrive ratios – intended to maximize highway fuel economy potential while leaving the lower four gears to maximize performance.

You do get the towing prep package (which includes a transmission oil cooler) as part of the standard equipment group if you buy the AWD version – but the tow hitch itself is an extra-cost item. 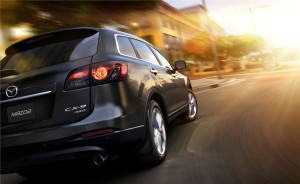 Though the CX-9 is Mazda’s biggest model, it does not feel nearly as big – as heavy – as similar-size competitor models like the Traverse and Flex. In the driver’s seat, it’s easy to forget that there are two more rows of seats behind you as you hustle through the curves. The traction control does not light off like a spastic Christmas tree; the body does not heave – the tires do not screech.

It is not easy to forget all that’s behind you – and under you – when driving the Traverse and Flex fast in other than a straight line. This is not to say they’re ill-handling vehicles. They’re just not up to the Mazda’s fitness level, so to speak. Two older, slightly out-of-shape jocks carrying an extra 20 around their middles – vs. a younger, fitter guy who still has his six pack. 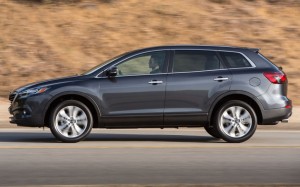 The V-6 is punchy, but what really makes it shine is the six-speed automatic.

It’s a “smart” automatic with a learning algorithm computer brain that continuously adjusts itself to your driving. If, for example, you’re trying to keep pace with a Miata through a series of S-turns, it’ll hold the lower gears without upshifting as you come out of the corners – just like you’d do yourself with a manual transmission. When you slow down/back off, so does the transmission – which then eases into 5th or 6th to cut the revs and up the mpgs.

At least a little bit, anyhow.

Steering is light, precise and very similar to what you get in Mazda’s other cars. 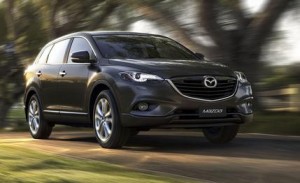 The Ford Flex is not even close as a driver’s car; the Traverse (and its higher-priced GM siblings) is better but can’t match the CX-9’s moves, either.

That leaves the new Hyundai Sante Fe – which I haven’t yet had the opportunity to test drive. It’s the one I’d recommend you test drive before coming to any decision – because based on the stats (and the looks) it is the model Mazda needs to worry about the most. 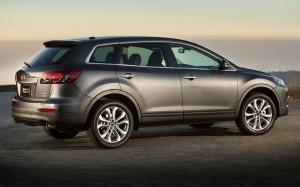 As with the on-the-road differences, the meets-the-eye differences between the CX-9 and its rivals are significant: The CX-9 is much sleeker-looking, less boxy than the Flex and less SUV-like than the bigger (and bigger-looking) Chevy Traverse. The low, wide front end feeds into a fast windshield and low roofline – all of which make the eye believe the car’s smaller than it really is.

Hyundai has emulated this approach with the new Sante Fe – which is also very nicely proportioned.

The interior of the CX is also sporty and upbeat-looking. Available piano back and wood trim inserts nicely complement solid and two-tone interiors. Rotary controls for the AC, fan and heat you can adjust by feel – without having to take your eyes off the road. Sports car-like gauge cluster with large tach and speedo and secondary pods off to either side – the whole thing backlit in aircraft-like red-orange. Wide and deep center console that’s very comfortable as an arm rest and has plenty of room to stash your radar detector before that cop up ahead sees it. 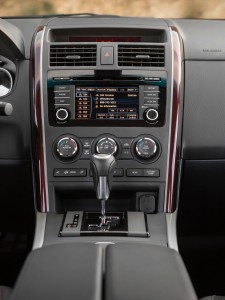 Real Time Traffic updates have been integrated with the GPS – and all trims get a bigger/redesigned 5.8 inch LCD display. Grand Touring models can be ordered with a DVD entertainment system for the passengers. This also includes a top-of-the-line 11 speaker Bose surround sound audio system.

At 200.6 inches long (only about 2 inches less long than a Honda Odyssey minivan) and riding on a 113.2 inch wheelbase, the CX-9 is – by far – the longest passenger vehicle Mazda has ever built. These dimensions allow almost as much first and second row head and legroom as there is in the Traverse and Flex  – and a viable third row for two adult passengers. The third row has 32.4 inches of legroom – tight, but enough to sit without having to rotate your legs to the side or assume the fetal position. The only issue is getting back there – which requires being young and nimble. Or at least, nimble. Kids and teens will have no problems.

The Access Issue is not unique to the CX-9. It is a common characteristic of all crossover SUVs. Without big (and tall) sliding doors – as you’d have with a minivan – getting into (and out of) any crossover’s third row will involve some light gymnastics. 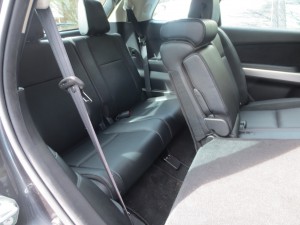 Another crossover compromise – and this goes for all of them – is total cargo capacity. Even though there’s a lot – 110.7 cubic feet for the CX – it’s still a lot less than the pushing 150 cubes of total cargo capacity you’d find in something like an Odyssey or Sienna minivan. And of course, in the van, you can usually physically remove the second and third rows (as opposed to just folding them down) which along with the taller roofline – lets you cart home big/wide stuff like a refrigerator or even a small motorcycle (yeah, I’ve done that).

Still, the CX-9 has more cargo room than both the Ford Flex (83.2 cubes) and the 2013 Sante Fe (80 cubes) despite its less utilitarian silhouette – and not much less than the very utilitarian-looking Chevy Traverse, which boasts 116.3 cubic feet of cargo capacity.

Even though the new Sante Fe offers more versatility (5 and 7 passenger configurations) it may still be too small for some families – while the CX-9 might be just the right size, neither too big nor too small. 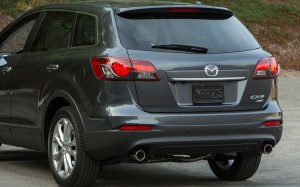 Though it is one of the older designs in the segment (dating back to 2010) the CX-9 still looks – and feels – current. Other than its not-so-great maximum tow rating, there’s nothing about it that stands out as inferior to the newer stuff – and in terms of how it drives, nothing I’ve driven in this class comes close.

The new Sante Fe may – but I can’t say just yet.

Mazda’s rep for quality – and its customer satisfaction scores – are among the best out there, even though Mazda’s prices often significantly undercut competitors. For example, the Chevy Traverse starts at $30,510 –  and you can easily spend more than $40k on one. The Ford Flex is even pricier – pushing $50k for for a fully loaded (and Ecoboosted) one. The CX-9 Gran Touring with AWD and 20-inch wheels is just over $35k.

But, there’s that all-new Sante Fe. If you don’t need the third row, you can save yourself $4-5k – and even the longer wheelbase/seven passenger version of the Hyundai undercuts everyone (including the CX-9) on price. Hyundai is also the up-and-coming thing, a brand that (along with Kia) more and more people are turning to for hip-looking, well-built, fun-to-drive and very competitively priced vehicles. 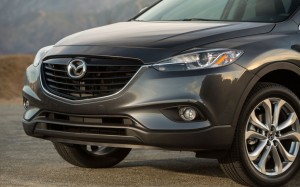 Though Hyundai has laid down a serious challenge, the CX-9’s still got size on its side (not too much – but not too little) as well being all kinds of fun to drive. Or at least, a lot more fun to drive than you’d probably ever expect a vehicle this big – and this family-minded – to be.