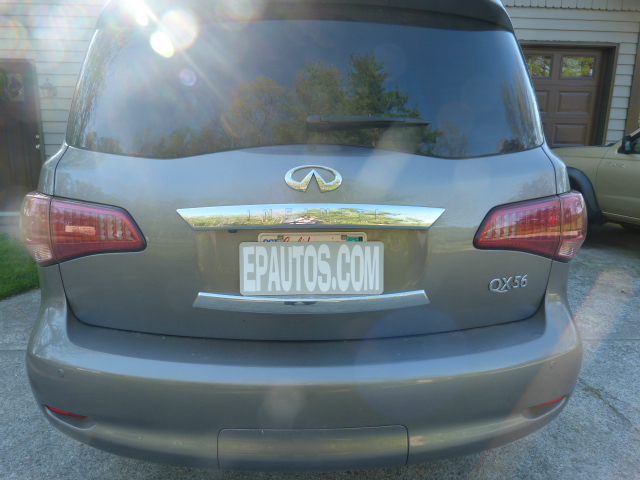 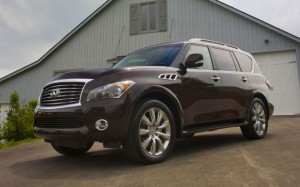 Few things on wheels give the finger to the OWS proletariat as lustily as this 14 MPG roller.

It’s bigger than a Cadillac Escalade – and unlike the AWD-only Caddy, the Q has a real 4WD system, with off-road-capable Low range gearing. 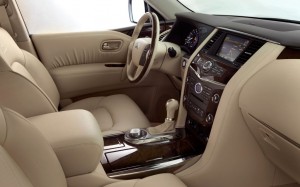 The one I tested was almost $75k and change – or three Prius C’s worth of wetlands-stomping wonderfulness.

Otherwise, the Q is a carryover.

David Lee Roth – in his prime. The Q glitters and struts and puts on  a show everywhere it goes.

David Lee Roth – in his prime. The Q can be a bit much.

Pitchfork proletarians all around you. 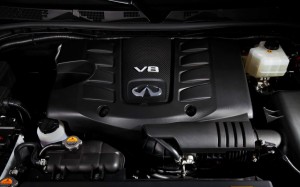 You can go RWD or 4WD. Real 4WD, with a two-speed transfer case and Low range gearing, controlled by a rotary knob on the center console. The transmission also has Snow and Tow modes, controlled by buttons adjacent to the rotary knob controller for the 4WD.

The RWD version can get to 60 in 6.6 seconds or so; the heavier 4WD version still makes the cut under 7.

This is a fierce run for a beast this big – this heavy. 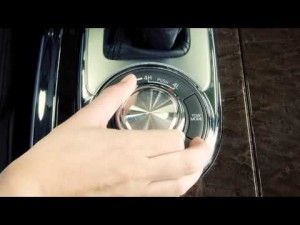 The Q is also  quicker than the slightly more powerful (403 hp) Caddy Escalade, which needs about 7.5 seconds to reach 60.

Of course, you’ll pay – dearly – at the pump: 14 city, 20 highway – and that’s just what the EPA says. Here’s what the Qs trip computer said after my week-long test drive: 11.5 MPG, average. The big V-8 likes to drink premium, too. Filling the 26 gallon tank will cost you about $100 at current prices.

And you’ll be filling it often.

To be fair, the same is true of the others in this class. Even the “efficient” Benz GL350 BlueTec diesel only manages 19 city and 26 highway. This is better – but not much – and don’t forget that diesel fuel costs more than gas in most parts of the country. Plus, you will have to buy urea (AdBlue) every so often, on top of this.

The Cadillac Escalade is actually slightly worse than the Q – 14 city, 18 highway according to the EPA. And the much smaller (and $81k to start) Lexus LX570 is much worse. It’s the “winner” when it comes to consuming the earth’s precious bodily fluids: 12 city, 17 highway. This makes my ’76 Trans-Am (with 7.4 liter V-8) seem almost planet-friendly. 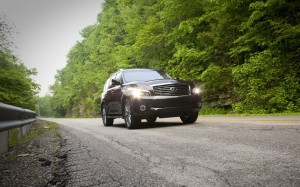 This is the most obvious difference, driving-wise, between the Q and other super-sized SUVs. The Q is actually plausibly sporty: It not only accelerates more swiftly than most cars (the rev-matching downshifts of the seven-speed automatic enhance the sensations – and sounds – of speediness) it also takes curves at a clip without tripping all over itself – something few real-deal 4WD SUVs, even after all these years of civilizing them, can do.

Part of the reason for this is Infiniti’s Hydraulic Body Motion Control – part of the Touring Package, which also gets you a mondo sport-performance 22 inch wheel/tire package. It tamps down body roll during cornering by pumping up the suspension on the outside of the corner you’re entering to compensate for the lateral forces on all that high-riding bulk. 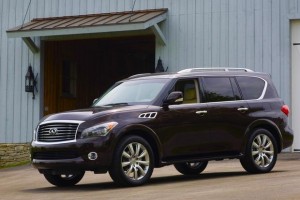 The system works – and more, it works with subtlety.

In other SUVs, handling deficits are dealt with reactively – by the sudden intervention of the stability/traction control system. You feel brakes pumping, throttle being dialed back. The frantic little yellow TCS light flashes in the gauge cluster. In the Q, you just drive on. You have to be really pouring the coals to it for the stability control to come on.

The 22 inch wheels and short sidewall performance tires (also available as a stand-alone option for $2,300) surely help the handling but surprisingly, don’t kill the ride quality. This is most definitely not par for the course. I have driven many new vehicles with 20-plus-inch wheels and they tend to ride like leaf-sprung, solid-axle Willys Jeeps.

The 22 inch tires do have some downsides, though. I checked Tire Rack and found that the standard 20 inch tires (OE replacement) cost $220 each. The 22 inch tires surely cost more and because they’re performance-minded (compound as well as short sidewall) they probably won’t last more than 20,000 miles before they need to be replaced. But then, if you are even thinking about a machine like the Q, such things are of tertiary concern. 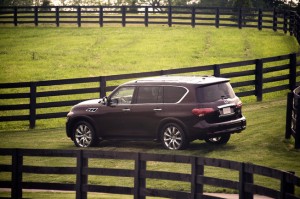 What is of concern – regardless of your means – is the maneuverability of this machine in close quarters. The Q is 208.3 inches long, stem to stern. How long is that? It is six inches longer than a Cadillac Escalade (202.5  inches) and 11.3 inches longer than an Infiniti LX570 (197 inches). It’s also nearly seven inches longer than a Benz GL (201.6 inches). Only the Cadillac Escalade ESV tops this (222.9 inches) and – trust me – you really ought to test drive any of these behemi before you commit. I live in the sticks – rural SW Virginia – and in this open-roaded, lightly trafficked area, the size of something like the Q – and its 41.6 inch turning circle, which is the biggest turning circle of them all – is much less of an issue. I’ve got 16 acres and a private driveway, with a big pad outside of my garage. Backing up and turning around is no problem. I could back and turn an aircraft carrier on my spread. But then you drive into town… and find you’ve got a lot less room to work with. Try a busy shopping mall parking lot – finding (and fitting into) a parking spot. Then try backing out. Even with a surround view camera and all the electronic assistance short of the bridge of the Battlestar Galactica, it can be awkward – and stressful. Even if you are ok with it, be sure that other people who may be driving this thing – such as your wife – can deal with it, too.

To me, the Q’s exterior styling is its weakest point. It has a manatee mug – and some incongruous styling affectations, such as the side vents on the front fenders. I guess the designers felt they needed to do something to break up all those acres of metal. It undulates – in contrast to the more pleated and angular shapes you’ll see if you cross-shop the competition. 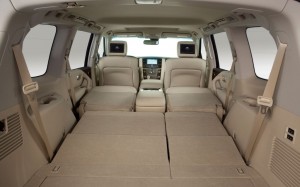 Size is accentuated – not toned down. Everything from the 22 inch wheels up seems deliberately intended to convey massiveness without apology. You will be noticed. And feared. Imagine being the driver of a not-so-SmartCar and finding yourself suddenly in the looming shadow of a Q. You will want to move aside, like right now – like a dinghy in the wake of Titanic.

Of course, that’s part of the politically incorrect fun of owning something like the Q: To be large – and in charge. 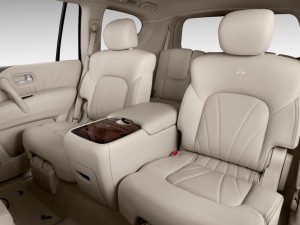 All the vehicles in this general category have enough interior space for the a proper Mormon family. However, the Q can seat eight people, which is one more than than the usual seven. Access to the back seat area is made easier by such things as an available automatic second-row tilt/fold function controlled by the driver via a pair of buttons on the front console. This is in addition to the automatic fold-stow for the third row, controlled by switches in the tailgate area.

The interior is like the Emperor’s Suit at Trump Towers – or something along those lines. You are greeted by etched mesh background gauges, the numerals backlit and hidden until you push the ignition button – at which point they come alive with an electro-phosphorescent glow.

Every panel is soft-touch, accented by chrome here, wood inlays there. The only problem with it is that it’s way too nice to even think about setting a muddy boot on the plush carpets or a gloved and grimy hand on the hand-stitched leather steering wheel – though it’s tempting to think about it given the real-deal 4WD that’s at your beck and call. 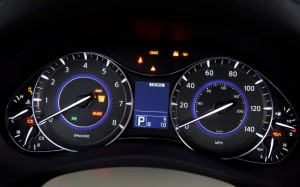 You can order a rearseat entertainment system with individual LCD monitors built into the headrests, the nav system is voice-command and there’s a really neat perimeter camera system that not only shows you what’s behind you but also what’s to the sides of you – all at the same time.

The 15 speaker Bose stereo that comes with the Deluxe Touring Package is just incredible.

I am not a fan of the also-optional blind-spot/lane departure warning system. It would false trigger – with audible warning – just driving along (all by myself) on windy country roads. Trees too close to the road would do it – fooling the proximity sensors into “thinking” a car was in the blind spot. Luckily, it can be turned off. Unluckily, you have to turn it off every time you start the Q. 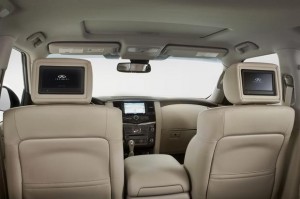 Likewise, the slightly audible dieseling sound coming from the direct-injected engine. They all do this, by the way – not just the Q, not just Infinitis. Anything with DI – which means, anything built since last year, just about. But you can’t hear it with windows up and doors closed. It’s only noticeable when you’re standing outside the running vehicle. And it’s a small annoyance worth putting up with, too – because without DI, the Q’s gas mileage would probably by around 9 MPG, average, instead of 11-ish.

I love that the Q – like all Infinitis (and all Nissans) does not beep at you if you haven’t “buckled up for safety.” Just a red light on the dash, that’s it.

I have one small complaint: The seat heaters don’t get hot – and (trust me) you can get hot seat heaters in vehicles that cost a third what the Q costs. I test-drove the Q in early April, when it was only chilly outside (mid 40s). When it’s cold outside, you’re going to want more BTUs. The heated steering wheel that is packaged with the seats is better. 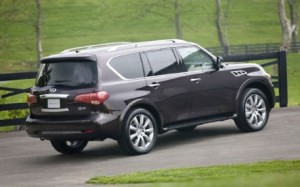 The only other real-deal 4WD SUVs that can be said to handle – the Porsche Cayenne and the Range Rover Sport – are either a lot more expensive. Or they are smaller.