Clearly, something must be done. 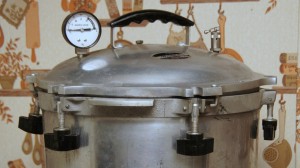 It is outrageous that just anyone – even kids! – can buy a dangerous pressure cooker without a background check or even showing ID. There is no waiting period and people – potentially unbalanced and dangerous – can legally buy multiple pressure cookers. Just like that!

If you’re laughing, don’t. Because the same imbecile arguments are commonly used – and accepted – when it comes to justifying the imposition of restrictions on firearms.

What’s interesting – the tragedy of our time  – is how many people are unable to form the conceptual connection in their minds. That one thing implies another. If it’s justifiable to restrict access to X because it’s possible that someone might use X to hurt people, then it is also justifiable to restrict access to Y on the same basis. Pressure cookers need to be “controlled” for the same (imbecile) reason that guns must be “controlled.”

Same goes for anything else that could be used for evil purposes. 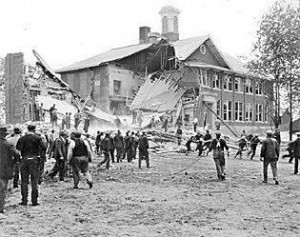 Is it the body count that counts? Up to now, the anti-gun fetishists have excoriated firearms on the basis of their greater lethality potential. That a “high capacity” magazine or “semi-automatic” design means a person can deal out more death. Well, Monday’s mayhem far eclipses Columbine and Newtown combined. Almost 200 people (at last count) injured and killed. And there is also the earlier example of the Bath Township School Massacre – where explosives were used to murder more than 30 people.

What could be easier than buying a pressure cooker? Or a box of roofing nails? Or how about a few gallons of gasoline? There’s no limit on the amount of gas you can buy – and it would be no trouble at all for some sick SOB to pour a gallon into a bucket, throw the contents on someone else – followed by a match. Death will come as surely as it would from a nine millimeter slug. A sick-minded person could kill very effectively with a large SUV, too.

But of course, most people don’t throw gas on other people and set them on fire. Most people would never use a pressure cooker for anything more lethal than a gut-bomb fried chicken dinner. Roofing nails are usually used… on roofs. SUVs are not commonly driven onto playgrounds with the object of running over as many little kids as possible.

Because most people are not sick in the head.

And that goes for most gun owners, too.

But here’s the difference: Most people do not own guns. Especially “city” people. And so, out of ignorance, out of fear – and because it does not affect them – they support “controlling” guns. If they owned guns – if they were a part of their everyday lives – like gas or roofing nails and yes, pressure cookers, too – then calls to restrict, deny and punish people for possessing (and responsibly using) these harmless-in-themselves objects would be met with howls of derision. 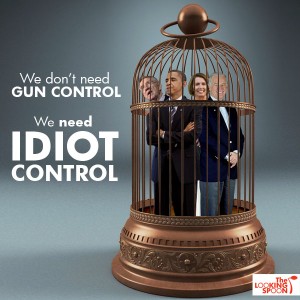 Instead, we have the conceptual short circuit – the end product of the intellectual crippling of the average American.

Thus, guns (and only guns) are inherently and universally malignant. Because only they are sometimes used for evil purposes. But never pressure cookers, gasoline, roofing nails or any other item – even though those items can be (and have been) used as or even more effectively to kill innocent people.

A reasonably bright middle schooler ought to be able to discern the fallacy. Unfortunately, the   average American adult – with a college degree – cannot. This is absolutely deliberate – the result of carefully planned policy. The entire object of government schools is to snuff the conceptual capacity. To render the patient unable to ever think beyond particulars. Such a person is then easily manipulated by the most infantile arguments – emotional pleadings, really.

All of this is obvious to those who have escaped the conceptual crippling that has been done to the American volk.  The horror of it, though, is that most people have not escaped it – leaving the few who have in the position of an innocent man thrown in prison. It’s all wrong – and he knows it’s wrong.

But the rest of them not only don’t know it – they don’t want to know it.

And they don’t give a damn.

When Decent People Start to Fear – and Loathe Cops…