Republicans, Democrats – authoritarian collectivists generally – reflexively dismiss Libertarianism as “impractical” and “naive” in order to avoid discussing the validity of core Libertarian ideals – self ownership, non-aggression. They wave their hands and say, “it won’t work.”

But is this true?

One of the most tiresome objections to a free society – that is, to a society based on the Libertarian ideals of self-ownership and non-aggression – is that absent police, there would be no way to prevent people from running amok and abusing others; that a Lord of the Flies scenario would ensue, with the strong dominating the weak. There would be chaos, insecurity and vigilantism, they cry.

First, it is necessary (as Ayn Rand famously put it) to check one’s premises. It is true that a Libertarian society – a free society – would not have any need for police. Police enforce laws. As most thoughtful people know, laws are not always just. Indeed, laws are more often not just. This hardly requires elaboration.

Moreover, we already suffer from chaos, abuse and vigilantism – routinely. Only it is not seen as such by most people because it is done under color of law. We face impenetrable ukase – and arbitrary enforcement. People are treated as presumptively criminal on the theory that “someone” might be a criminal. At every step, we face demands for submission – and are threatened with violent reprisals if we do not. We are absolutely not secure in our persons or our effects.

Even something as elementary as being free to travel unmolested is denied us.

The average person is done more real violence by the law – and by the police who enforce these laws – than by the theoretical (for the most part) harm that might by done them by lawbreakers – i.e., their fellow men, absent the law. 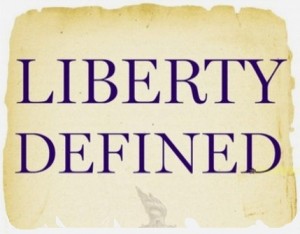 For Libertarians, on the other hand, there is only one law – non-aggression: Do no harm to others or their property – but otherwise, do as you wish. Jefferson styled this the pursuit of happiness.

If this principle became the conceptual basis of our proposed system, at a stroke, the entire clunking, clanking, impenetrable, arbitrary, vicious, mindless apparatus of “the law” – and law enforcement – including the Talmudic parsing of codes and regulations – would be done away with and replaced by the simple principle: Cause none harm. It is a principle almost anyone of normal intelligence can understand – and articulate. Either a given act did – or did not – hurt someone, or cause damage to their property. Simple. No doubt, this explains why lawyers such as those who constructed the long-con Constitution venerate their laws – and loathe the Libertarian’s law.

The principle of cause no harm also implies its corollary: Go in peace. That is, if you’ve caused no harm to others, you ought to be free – have a right to be free – to go about your business in peace. To be left alone. And to have that right respected as inviolate.

But, cry the authoritarians, what about those who disrupt the peace?

Here they are manifestly disingenuous, because the majority of that which they revere in police work – that is, law enforcement – has little to do with keeping the peace and much to do with enforcing laws. It is true there are (and likely always will be) bad people in any society – including a free one. But there are far fewer genuinely bad people in any society – in the sense that they’ve caused harm to others, as opposed to “law breakers.” In a Libertarian – that is, a free – society – probably two-thirds of the work that currently occupies police (and courts and prisons, etc.) would simply . . . disappear.

But let us take the authoritarian collectivists at their word and discuss the the Libertarian replacement for police, already hinted at above: 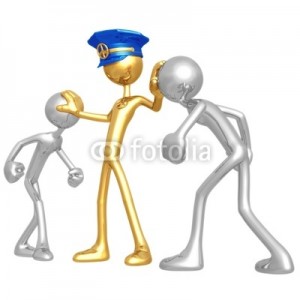 In any community larger than a small group, there will probably always be a need for such – if only to avoid the same sort of arbitrary violence we suffer under today (only meted out by random individuals at their whim rather than by specially costumed goons acting under “color of law”).

As the term implies, their charge would be to keep the peace – but nothing more. To step in, for example, when one individual has harmed another – in order to prevent that individual from harming another (and to bring him to account for the harm he has already done).

There could be civil and criminal courts to arbitrate and adjudicate and – where necessary – make sure the scales are balanced. That miscreants are held accountable – but not cruelly or vengefully treated. That disputes are resolved, if not amicably, at least reasonably. It would not be perfect, of course – the straw man typically relied upon by authoritarian collectivists who of course never concede the endless imperfections of their system. But at least – being based on the principles of self-ownership and non-aggression – it would be more perfect than the existing system in that absent tangible evidence of having caused demonstrable harm  (as opposed to violating a statute) no charges could be successfully pressed. If this were the rule rather than the exception probably 9 out of ten people would never have any interaction with the peacekeepers – beyond offering a friendly wave and a “hello, there!” once in awhile.

Most critically – and to answer the critics of practical Libertarianism – peacekeeping would not require compulsory taxes (which would of course violate the NAP) for its support. 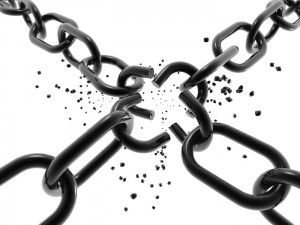 Just as in many communities, there are volunteer fire departments funded entirely by the freely given donations of those who value this service, so also I suspect could legitimate peace keeping and civil/criminal courts be maintained by the freely given support of some (but not necessarily all) members of a community.

Most people – freed from the current system of confiscatory and coercive taxation – would likely pay for such a service willingly  – without being coerced in the slightest. But those who could not afford to contribute – or who simply preferred not to (which I suspect would be few if we were talking about legitimate peace keeping based on the bedrock principle of non-aggression) would not have to. Yet they’d still enjoy the benefits, in the same way that everyone in a community with a volunteer fire department enjoys the benefits of having a fire department (for example, that a forest fire is contained before it reaches your home). Every person in the community would be bound, in terms of their freedom to act, only by the principles of non-aggression – and self-ownership.

One aspect of this arrangement that’s  particularly appealing is that it would almost have to be very local and small-scale – arguably, the appropriate scale for human society.

No state police. No federal “law enforcement.” No impersonal bureaucracy.

The job of keeping the peace (what is called being a policeman today) as well as that of judges, etc., could be part-time gigs – perhaps even non-compensated/rotating positions of honor shared among the members of a community.

But the guiding principles would always be: Non-aggression, self-ownership. The sum total of “the law” in a free society.

This is the basic skeleton – and by no means completely fleshed out. But, I see no reason why it could not be fleshed out. Nor – most importantly – that such a thing conflicts with core Libertarian ideals. I agree with Madison when he wrote that not all men are angels. But I disagree with him – and with authoritarian collectivists – that this fact necessitates violating the rights of angels (so to speak).

What I mean by that is simply that while most people are not angels – neither are they devils. 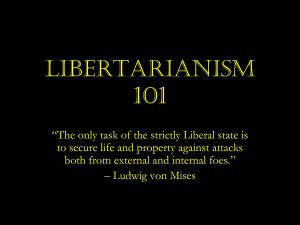 The typical person is not a murderer, a rapist, a thief. Nor would they become these things absent laws forbidding such acts.

People do commit robbery (via the ballot box) and seek to control others people’s lives at gunpoint (by proxy) but chielfy because they do not quite realize what they’re doing. They’ve been ethically misdirected since childhood; their empathetic instincts manipulated – twisted – such that they believe it is (as an example) the right thing to vote for laws that “help” the poor – never really stopping to consider where that “help” comes from. Or that it cannot be right to violate a right.

Such things can be taught; ethical confusion remedied.

Some of course cannot be reached. The Clovers among us. But many –  a working majority – could be. I know this to be true because it once was true. Within living memory, a large percentage of the people in this country did believe in live – and let live. Did not believe in taking what isn’t theirs. And so on.

Therefore, it can be true again.

But the main point remains: It is certainly possible to deal with those who don’t believe in not taking what isn’t their, who do commit assault and so on – without assaulting the rights of everyone else to be left in peace.

Libertarianism is both right – and practical.

Which is why authoritarian collectivists, red and blue, are united in their determination to keep people from discussing it by simply dismissing it.

It’s time to stop letting them get away with that.

PS: We have thrown Google – and Google ads – in the woods. They blacklisted us – so we dumped them. See here for the full story about that. So, we need your support to make a go of it and keep EPautos rolling. Please consider supporting this web site in whatever way you’re able. The link to our “donate” area is here.

Not All the New Cars News is Bad News