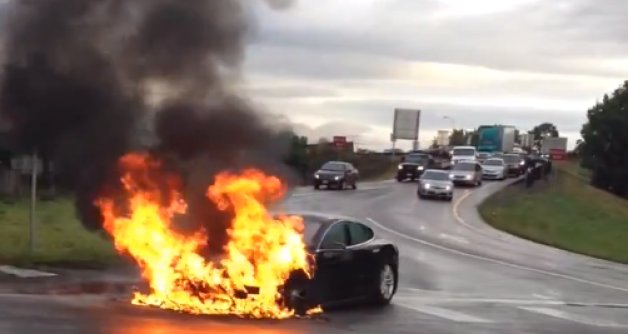 Maybe you saw the YouTube video of a Tesla electric car going up in smoke?

I was tempted to write something about it, but decided against. Reason? I don’t see battery fire as a significant problem. Not as such, anyhow.

Gasoline fires happen occasionally, too. I once burnt my ’73 Super Beetle to a crisp.

Per OJ, it happens.

To my knowledge, there have been very few problems with modern electric (and hybrid car) car batteries, at least as far as them catching fire, or exploding.

The Toyota Prius has been in widespread circulation for more than ten years. There are numerous other hybrid models available, too. Also “pure” electric cars, such as the Chevy Volt, the Nissan Leaf and Honda RAV4 electric. These all tote around several hundred pounds of batteries (nickle metal hydride, lithium-ion, etc.). These batteries may be expensive, but they’re pretty safe, if history is any guide. At least, as safe as carrying around 15 gallons or so of highly volatile gas. Problems can arise, of course – with either power source. But the overall danger is minimal, assuming decent design – and proper handling. 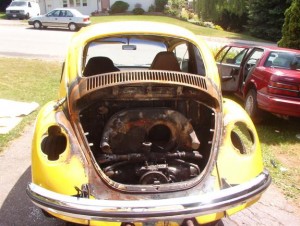 Back in the day (mid 1990s) Ford fooled around with a sodium sulfur battery. A hot battery. It had to be maintained at a temperature of several hundred degrees – else it would melt down like a portable Chernobyl.

Now that was a fire hazard!

My beef with the Tesla – the real beef, as I see it – isn’t that the car is dangerous.

It’s that it’s an absurdity.

A car with a starting price of $70,000 is by definition absurd as an “economical” car. And isn’t that the main reason for making electric cars? To get around paying a small fortune for gas?

But if you can afford to pay a large fortune for the car, you are not worried about paying $4 a gallon for fuel.

If the cost of getting around is an issue, you’d be better off buying a Prius – which costs a third as much as a new Tesla – and putting the $50,000 you just saved toward gas.

Elon Musk – the billionaire behind Tesla – may not comprehend this. Because he is a billionaire. He possesses (for the math-impaired) more than a thousand million dollars. $70,000 (or $700,000) is, to a billionaire, what $70.00 is to people like you and me. 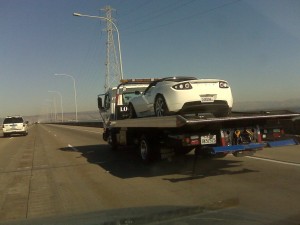 Now, if his car cost say a bit more than a Prius – but out-looked it and out-performed it – then, he’d have something. Something real people – you know, the ones who have to worry about money – might be interested in.

Something that would not require massive subsidies to entice “buyers,” as in the case of the Tesla. (I use the term ironically since they’re only buying some of the car. We’re buying the rest of it.)

But the Tesla is very quick, right? Yes – but only very briefly. Floor the Tesla and it will do 0-60 in just over 4 seconds. And then, stop. Because the batteries will be dead. Same goes for continuous high-speed operation.

It must be driven very gingerly  . . . if you expect to keep on driving it.

As opposed to charging it.

A car with tremendous performance potential that cannot be used more than once or twice – or for any sustained period – without severely depleting its batteries – and thus, dramatically reducing its range and forcing you to stop for a lengthy recharge session – is as absurd as a BMW M5 or Corvette fitted with a gas tank that only holds a gallon of fuel… which you must re-fill with a syringe.

Any $15,000 new economy car can be driven farther – at much higher speeds – for much longer than the Tesla. 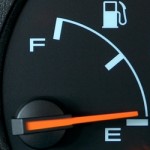 And for less than Tesla charges for its Model S, you can buy any of several high-performance cars that will out-accelerate it repeatedly. That can be driven at high triple digit speeds for hours rather than minutes – and take minutes rather than hours to refuel.

A new Mustang GT, for instance. Or a V-6 equipped Accord, perhaps? It might not be quite as quick, 0-60 – but you can drive the Accord all day long at 80-plus MPH. That’s something you can’t do in a Tesla.

Unless you don’t mind stopping for an hour or so every 30 minutes.

The danger with this car isn’t fire.

Another Car We Can’t Buy