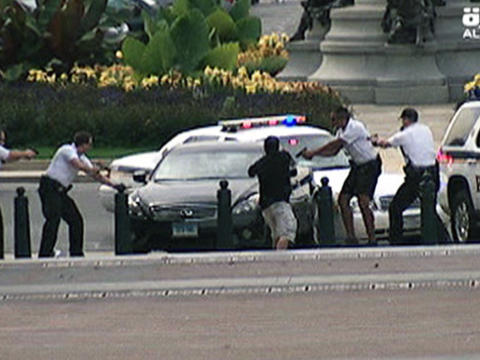 This woman who got mowed down by the Heroes up in DC? 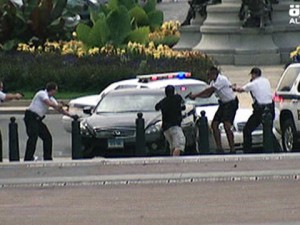 It got me to thinking – about how much has changed since I worked in DC, back in the ’90s. Before the police state really began to throb after nahhnleven.

Back then, I worked at The Washington Times, and drove into the city every day from neighboring Fairfax County. One afternoon, heading home on Constitution Avenue, I heard some sirens, looked in my rearview, and beheld a motorcade – perhaps the Dear Leader himself! It was rapidly gaining. Everyone else pulled over and off. Me? Screw the Dear Leader (or whomever it was in that black armored limo). I needed to get home – and my time matters more to me than the Dear Leader’s time.

Or even the Dear Leader, himself.

So, I kept on going, hoping to make it to the bridge – and onto the GW Parkway – before the motorcade caught up.

But they were really hauling the mail – and did catch up.

And I did not pull over.

Whereupon a blacked out Suburban pulled in from of me – and its back doors opened up, to reveal an enraged Hero, armed with what looked to me to be an Uzi (compact machine pistol). He screamed at me to get out of the way.

But that was all he did.

Which is why I risked doing what I had done. In those days – long gone, hard to believe they were ever real – citizens didn’t risk being summarily executed for minor acts of disobedience.

I moved off, the motorcade went by. I was not “detained” – much less shot at. They went their way – and I went home.

Fast forward 20 years to yesterday. A woman – a mother – with a baby in the back seat – is shot to death for more or less the same thing I did. Obliterated, like Sonny Corleone at the toll both.

I am glad I left DeeCee long ago.