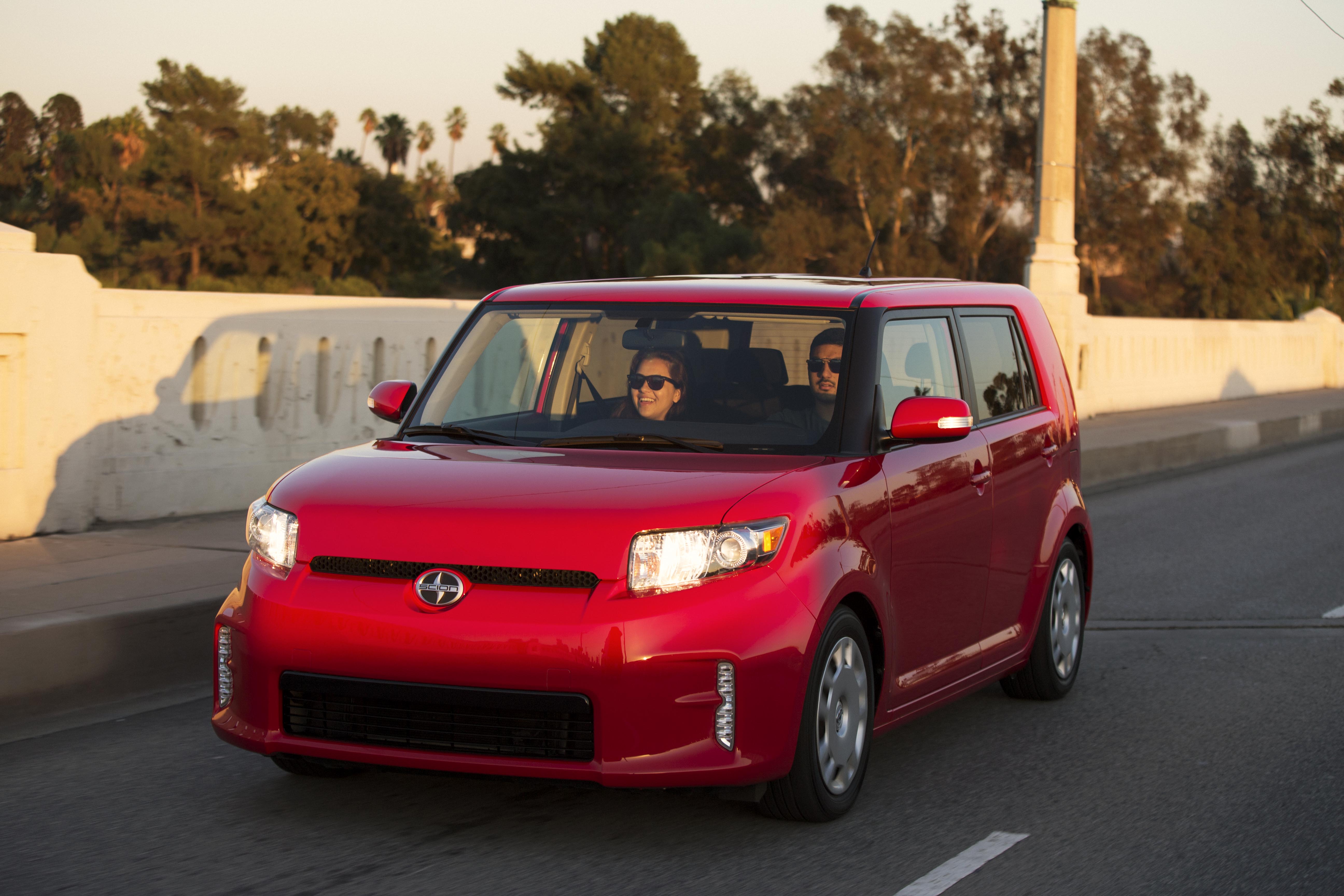 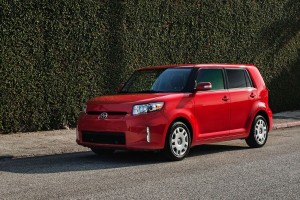 It may also be my last write-up of the Scion xB.

Toyota’s youth-focused spin-off brand is a bit green around the gills. Sales are down – and Toyota corporate is quietly allowing dealers to drop the Scion brand without penalty.

It’s all they’ve got.

If there’s nothing new on deck for 2014, the xB’s probably a goner – and this is not a review but a requiem. The current model dates back to 2007, when it was introduced as a new ’08. That’s six going on seven years now.

Way beyond the past-due date. 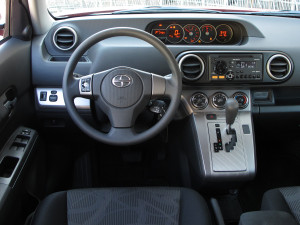 Personally, I like the xB. It has snarkiness going for it. It’s fun, it’s simple  – and unlike some of the newer competition (Nissan Cube) it’s not borderline dangerous on the highway.

But the aging xB has a number of all-too-obvious deficits that make it an increasingly hard sell in spite of its likable qualities.

The xB a “Japanese box car” – the first of its type to be offered for sale in the US, the original model making its debut as an ’04 model. Prior to its appearance here, most Americans had only seen these funny-looking, stubby, tall-roofed little matchbox car runabouts in the background of TV feeds from Japan, where – due to the extremely crowded streets and nonexistent parking slots – such vehicles are extremely popular. 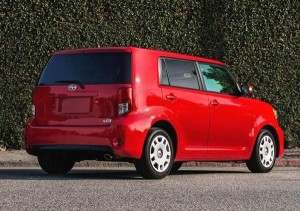 The first-gen car was an immediate hit – and did much to establish the viability of the Scion brand, which was also all-new that year.

In ’08, there was an update – and the car (which was now larger and heavier as well as less “cute” looking) sold ok, but something was lost in translation. Fast forward to now. The xB is pretty much the same – and floundering. 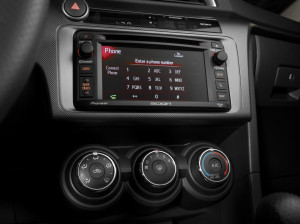 Late-production 2013s are be available with a touch-screen audio interface in place of the dated-looking (and hard to use) micro-buttoned head unit in older models. There are also minor styling tweaks, including integrated LED running lights.

Still neat to look at and fun to knock around in.

Much quicker than the Nissan Cube.

Doesn’t take up much space in the garage – or need much space on the street. 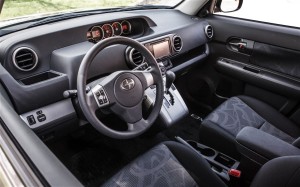 Getting obviously long in the tooth – and not just appearance-wise. Bush-era technology four-speed automatic; five-speed manual at a time when six speeds abound.

Mediocre gas mileage (largely due to the technologically ut-of-date transmissions).

The xB’s standard – and only available – engine is a 2.4 liter, 158 hp four, teamed up with either a five-speed manual transmission or (optionally) a four-speed automatic. 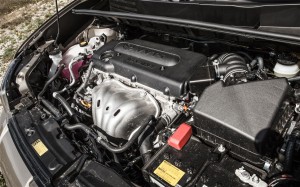 It’s not a hot rod, but it’s hotter – 0-60 – than the base engined Kia Soul (1.6 liters, 130 hp) and the Nissan Cube (which only comes with a 122 hp, 1.8 liter engine). The Scion can break into the mid-eights, while the base-engined Kia and the only-engined Nissan are charter members of the 10 Second Club. It’s a noteworthy difference – and one measure by which the xB is still objectively better than the competition.

The xB does ok on mileage, too: 22 city and 28 highway. This is less than average – but not by very much. The base-engined (1.6 liter) Soul only manages 25 city, 30 highway – and when equipped with its optional engine, this drops to 23 city, 28 highway – a dead heat with the xB. The real embarrassment – for Nissan – is the dismal mileage of the Cube, which despite being the least powerful and slowest of the three only manages 27 city and 31 on the highway (and that’s when equipped with its optional CVT automatic; the numbers drop to 25 city, 30 highway if you stay with the manual transmission). 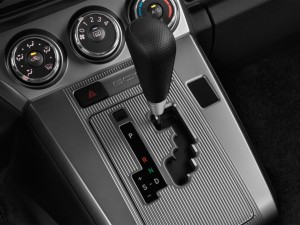 What’s interesting – and a little tragic – is that probably the xB could have been the most economical car of the pack if it weren’t disadvantaged by its anachronistic five-speed manual and four-speed automatic transmissions. The five speed manual can fly under the radar, maybe. But the optional four-speed automatic seems almost prehistoric compared with the six-speeds that are standard (or optional) in the others.

All the cars in this class are FWD.

The xB doesn’t lack for power. The 2.4 liter engine pulls pretty hard, actually – and even when teamed with the crickety GHW Bush-era technology automatic, gives a good account of itself.

The downshifts are deep, though. 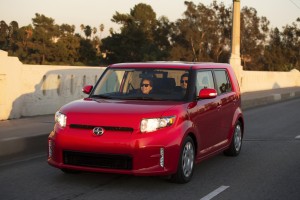 And the climb back up the tach is steep.

You’re in fourth – top gear, remember – running 45 or so when you roll up behind a slow-poke Clover and need to bust a move to pass him. You floor it. The transmission drops down to third – and stays there, while the tach arcs upward to the engine’s 6,500 RPM redline. If there were a six-speed box behind the 2.4 engine, the drop down to fifth (or fourth) would not be as jarring – nor as noisy.

The RPMs would be lower, sooner.

Third is also what comes up whenever you move the gear shift lever into manual/Sport mode – because fourth is overdrive in this transmission. There are not many gears to play with here. And when you’ve recently spent a week driving a vehicle with an eight speed automatic (the 2014 Dodge Durango I recently reviewed, see here for that) a four speed transmission feels seriously 1990s. 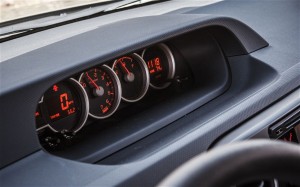 But, it does the job – and fourth (overdrive) is deep enough that the revs at highway speeds are not noticeably higher than in a car with a six or seven (or even eight) speed automatic. It’s just the getting to overdrive – and the higher/noisier RPM fluctuations – that’s noticeably different.

The ride is a weak point. It’s very bouncy. But at least it’s not tipsy – which the body-roll-a-plenty Nissan Cube is. The latter, which is also subject to being knocked off course by crosswinds – is really is for city-urban commuting only.

The xB’s a much more highway (and corner) viable ride. 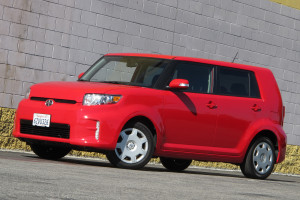 The xB’s looks are its blessing – and its curse. There is no “it’s ok.” You either really like it – or you really don’t like it.

Initially, the clumsy-cute-harmless-friendly appearance was sales Viagra for Scion. As it still is – for Kia. The Soul is selling like ecstasy tabs at a rave. But the xB – and Scion – are suddenly no longer as hip as they used to be.

The market – in particular, the youth market – wants new stuff. And the xB is old. Especially from the perspective of a young 20-something. A recent college graduate – the target demo for cars of this type – saw the current xB knocking around his neighborhood when he was still in high school. In contrast, the Soul (and the Cube) are newness personified.

If the xB cost $2k less than the Soul, it could probably get away with having a rougher-hewn, heavily hard plastic interior (not to mention the Bush-era technology four speed automatic) and fewer standard (and available) bells and whistles (the Soul comes standard with heated outside mirrors and Sirius-XM satellite radio and offers driver-selectable steering effort, heated and cooled seats, etc.). But these deficits call more attention to themselves when the car’s price is so much higher than an otherwise similar – but newer and nicer  – competitor such as the Soul. 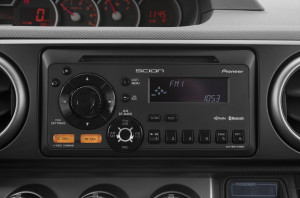 On the plus side, you can now get a 6.1 inch LCD touchscreen in the xB – which makes using the standard (and excellent sound quality) Pioneer sound system a whole lot easier – as well as classing up the joint. It is a night and day improvement over the bleak, aftermarket stereo looking head unit that it replaces – but which, unfortunately, it only replaces in the “10” anniversary edition xB. Lesser xBs still com with the ’90s-era aftermarket stereo looking head unit – with its tiny controls and buttons that are hard to see and even harder to use. If I’d been The Decider at Scion, I would have made the 6.1 inch LCD touchscreen standard-issue in all xB’s as a sort of fighting retreat or delaying action intended to maintain interest in the current car while awaiting the new car (assuming one’s coming). 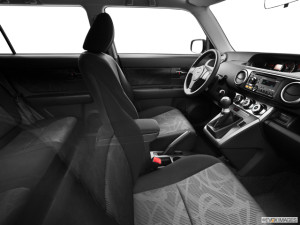 Though the interior feels a bit downmarket relative to the Soul’s, it has some sound functional attributes, such as numerous storage cubbies – and a shelf just above the glovebox. Headroom is generous – and visibility forward and to the sides is good.

The xB, though small, is larger on the outside than the Soul: 168.1 inches bumper to bumper vs. 163 inches for the Kia. Yet the Soul is roomier on the inside: 40.9 inches of legroom up front and 39.1 inches in the second row vs. 40.1 up front in the xB and 38 inches in the second row. These difference are relatively slight and so not a big deal. What is pretty startling, on the other hand, is the disparity in cargo room between the two. The 5 inches longer Scion’s got less cargo space behind the second row – 20 cubic feet vs. 24.2 for the ’14 Soul. 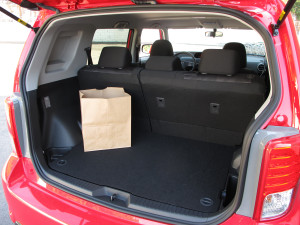 Interestingly, the much smaller (than both of them) Nissan Cube has about the same space for cargo – 11.4 cubic feet – and more legroom up front (42.4 cubes). The second row in the Cube is tight – 35.5 inches – but overall, it’s still more space efficient, all factors considered, than the much larger (it’s a foot longer overall) xB.

Again, the need for an update is all-too-obvious.

One of Scion’s “sells” has been a whole catalog of dealer-available/over-the-counter customization options. The advantage with this approach – vs. aftermarket stuff – is that the components have been engineered by the people who made the vehicle, so you’re not taking any chances with safety, function or reliability. No warranty issues, either. 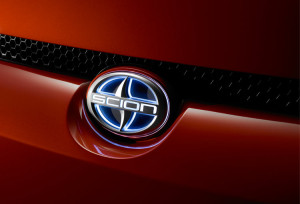 You can personalize your xB with any of several wheel packages (all the way up to 19s, which is a monster rim for a little runabout), performance exhaust/muffler, suspension parts, body parts (spoilers, fog lights) and – this is new – a boom box BeSpoke upgrade audio system with RCA jacks and a version of Toyota’s Entune app suite (Pandora, social media) plus GPS and the 6.1 inch touchscreen.

If you can swing a deal on an xB – which you probably can, given Scion’s straits – then it’s definitely worth considering the xB. It’s by no means a bad vehicle – it’s just that better ones are now available.

Some of them for less money.