In the capital city of the Land of the Free, a businessman and his family were subjected to a violent paramilitary raid for suspicion of exercising one of the freedoms enumerated in the Bill of Rights. Nearly 3 dozen armed SWAT agents held the family at gunpoint and even used a battering ram to rip a naked child out of the shower. The incredible use of force was initiated because of D.C.’s infamous gun control laws. Even more shocking is the fact that the homeowner could still be put in federal prison, despite the fact that not a single firearm was found in his home. 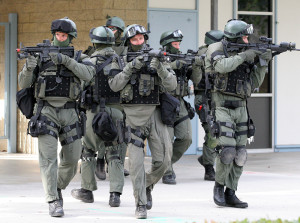 At around 8:20 p.m. on July 7, 2012, about 30 officers in full tactical gear came banging on the front door of Mark Witaschek, a successful financial adviser, brandishing a search warrant for “firearms and ammunition … gun cleaning equipment, holsters, bullet holders and ammunition receipts,” according to The Washington Times. Once Mr. Witaschek’s 14-year-old daughter allowed the officers inside, they immediately began pointing firearms at everyone in the home, starting with Mr. Witaschek and his girlfriend, Bonnie Harris. Both were upstairs when they were accosted and handcuffed.

Mr. Witaschek described the treatment of his children to The Washington Times. ”They used a battering ram to bash down the bathroom door and pull [my 16-year-old son] out of the shower, naked,” said Witaschek. “The police put all the children together in a room, while we were handcuffed upstairs. I could hear them crying, not knowing what was happening.”

Officers were as gentle with Witaschek’s belongings as they were with his family. “They tossed the place,” he told The Washington Times, and provided unreleased photos of the damage to his home which he estimated at $10,000.

For all this trouble, officers seized four items from the home:

one handgun holster
one spent brass casing of .270 caliber ammunition
one box of Knight bullets for muzzle-loading rifles
one live round of 12-gauge shotgun ammunition (which Witaschek claims was an inoperable shell that misfired years earlier, kept as a souvenir)