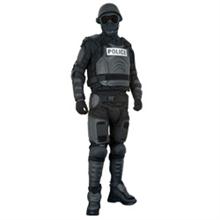 Like FEMA, local police are also preparing for mass panic

Police departments across Utah have been receiving surplus military gear well-suited for riot control, such as grenade launchers and armored vehicles, through a U.S. Department of Defense program that is far more prevalent than what was previously known, according to recently released documents.

For the past four years, the Pentagon has equipped dozens of Utah police departments with a wide variety of military equipment commonly used in riot response such as the aforementioned grenade launchers, M14s, M16s and mine-resistant ambush protected (MRAP) vehicles through the Excess Property 1033 Program, the Salt Lake Tribune reported.

In total, over 2,240 pieces of military equipment valued at nearly $3 million have been sent to Utah since 2009, an amount far more staggering than what was revealed before.

Several of the sheriffs indicated that the equipment would only be used in worst-case scenarios.

Iron Co. Sheriff Mark Gower also said that his department’s MRAP will only be used in “very, very limited situations where we anticipate the possibility of someone shooting at us.”

Another sheriff, Lynn Yeates with Box Elder Co., stated that his department’s grenade launchers will be used to fire non-lethal rounds, which are commonly deployed in riot response.

It is no coincidence that the Pentagon is purposely equipping these departments with military gear for civil unrest.

Currently, America is in worse shape economically than it was prior to the 2008 financial crisis. For one thing, America’s manufacturing might has disappeared due to the myriad of government regulations.

To satisfy consumer demand in spite of this, the U.S. has relied on foreign demand for the dollar as the world’s reserve currency, which has ensured that countries around the world would accept fiat dollars for their manufactured goods.

But eventually, as the Federal Reserve continues to create more dollars, the value of the already weak dollar will decline to the point where foreign countries will no longer accept them for their goods, destroying the American economy as it finally sinks under its heavy trade deficit.

The Fed’s only response to this and the still lingering recession is to print even more dollars.

“On top of the trillions in dollars already printed thus far, the Fed continues quantitative easing to the tune of about $80 billion per month,” Marc Slavo wrote on the subject. “It’s the only arrow left in the Fed’s quiver, because failing to inject these billions into stock markets and banks will lead to an almost instant collapse of the U.S. financial system.”

“Unfortunately, the current strategy is chock full of its own pitfalls, the least of which being the real possibility of a hyper-inflationary environment developing over coming months and years.”

In essence, by propping up the U.S. “house of cards” economy with the current round of quantitative easing, the Fed is only advancing the collapse of the dollar and the mass chaos that will ensue.

Other federal agencies are also making preparations for this mass rioting and panic.

The Federal Emergency Management Agency is currently looking for contractors that can collect and remove bio-medical waste during national emergencies, as reported earlier by Paul Joseph Watson.

Previously, FEMA unsuccessfully sought a contractor that could supply 100,000 medical scrubs to be delivered to 1,000 make-shift “tent hospitals” within 48 hours of a declared emergency.

The government knows that a collapse is coming.