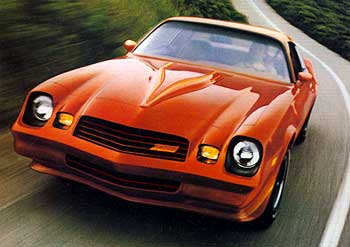 Arguably, the best second-generation Z28s were the first – and the last.

While the Z’s sister car – Pontiac’s Trans-Am – rose to the occasion several times during the lowest points of the middle-late 1970s (examples include the ’73-74 SD-455, the most powerful Trans-Am ever made – and made at a moment when power – real power – was becoming hard to find anywhere; also the ’77-79 400, 4-speed, WS-6 Trans-Ams, which rivaled the L-82 Corvette for acceleration – and beat it when it came to cornering) the Z literally disappeared for two years (1975-’76) and when it came back in the summer of ’77 it was – literally – a stripe and decal job. 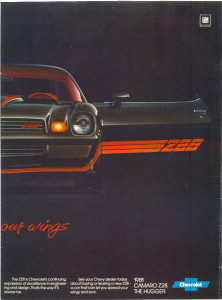 The 77 1/2 Z had the same LM-1 350 4-BBL V-8 that could be ordered in other Camaros – in other Chevys. Malibus and Novas. There were no special performance parts internally. Just a “Z28” sticker on the air cleaner lid.

Straight line performance was predictably mediocre. Most period tests reported a 0-60 time around 8 seconds – with the quarter-mile run taking about 17 seconds.

Chevy could have stolen much of Pontiac’s thunder by offering the Corvette’s optionally available L-82 350 (which was a genuine high-performance 350) as the revivified ’77 1/2 Z28’s standard engine. The L-82 was still the same basic engine that Chevy had installed as standard equipment in the ’70 LT-1 Corvette – and also the ’70 1/2 Z28. It still had the same heavy duty 4-bolt main block, the same high-flow cylinder heads – neither of which (unlike the lowly LM-1 350 in the 77 1/2 Z28) were shared with other, low-performance small blocks in the Chevy lineup. 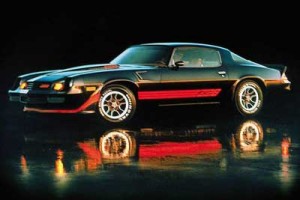 So equipped, the ’77 Z-28 would have leap-frogged to the head of the proverbial class – becoming America’s number-one performance car. And that, perhaps, is why it never happened. The Corvette’s primacy in the GM performance pantheon has always been jealously guarded. Still, they could have gimped the L-82 by say 15 hp and allowed that to happen (It’s what happens today – in 2014. The ’14 Camaro has the same basic V-8 as the ’14 Corvette… just wicked down a little for Camaro duty). Had this been done, the ’77 Corvette would have remained on top – but the ’77 1/2 Z28 would have been much more competitive with its Pontiac sister car. 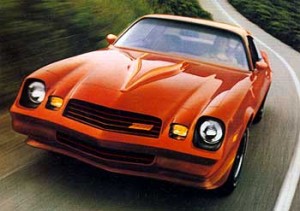 Chevy did the best it probably could have done under the circumstances to liven up the LM-1. It was fitted with a less restrictive (though not by much) exhaust and – if you ordered the optional automatic – you got the same “CB” TH350 used in the Corvette. It had a higher-stall torque converter and more aggressive shift points. A four-speed manual was standard, of course – but drivetrain-wise, the ’77 1/1 Z-28 was nonetheless virtually identical to a ’75-’76 Type LT ordered with the 350, the manual transmission (and so on). 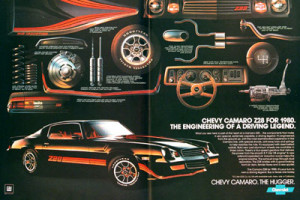 The focus was on handling now – and the ’77 Z28 did get meaningful upgrades in that department. There were Z-specific leaf springs in the rear – and complementary coils up front – damped by GM Delco shocks designed specifically for the Z. Also higher-rate front and rear anti-roll bars.

But – again – the Z lagged a few steps behind  its Pontiac cousin. The ’77 Trans-Am offered aluminum alloy wheels (15×8 inch in ’78) while the Z came only with stamped steel 15×7 Rallye rims. At the Pontiac store, you could also upgrade the T/A’s already excellent Radial Tuned Suspension (RTS) system with an even more excellent suspension (WS-6) which added a high-effort steering box, 15×8 alloy wheels (’78 up) and (in ’79) four-wheel disc brakes. At that time, the only other American cars that offered disc brakes all around were the Corvette – and the Cadillac Seville. 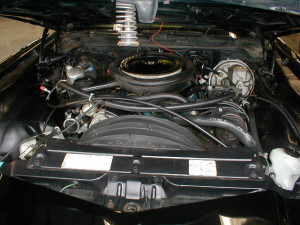 Cosmetically, the TA was also several steps ahead of the Z.

In ’74, the Camaro got what amounted to braces – huge, awkward-looking exposed metal bumpers, fitted to comply with the latest federal requirements.On the 77 1/2 Z28, these were painted body color – which helped.

Pontiac dealt with the government’s mandate in a much more aesthetically clever way. The bumpers were hidden underneath body color-painted urethane plastic covers, which maintained the clean lines of the car and – at a time when virtually all other cars had exposed bolt-on bumpers – gave the TA an extremely sophisticated look. 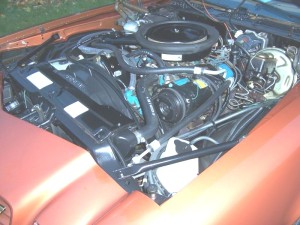 And of course, all Trans-Ams had the now-iconic package of exterior enhancements: functional fender vents in the front quarter panels, a chin spoiler to deflect air to the sides, with a set of four smaller spoilers installed ahead of each wheel-well to redirect air there. Also part of the package, the famous “shaker” hood scoop. It had not been functional from the factory since 1972, but could very easily be made functional by the owner. The really important stuff – including the hole in the hood – was already there. 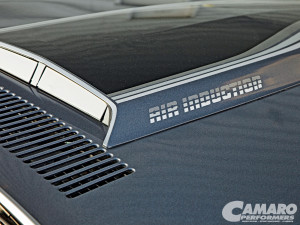 The LM-1 350 was up-rated to 190 hp and the redline raised to 5,000 RPM – possibly achieved as a result of the more efficient exhaust system, which split into dual exhaust aft of the catalytic converter and now used a pair of resonators in place of the previous (more restrictive) transverse muffler that had been stuffed up against the rear axle pumpkin in the ’77 1/2 Z.

There was also a hood scoop. A factory functional hood scoop. The rearward facing “air induction” scoop harkened back to the cowl-induction scoop used in the original (’67-69) Z-28. And unlike the ’73-up Trans-Am’s shaker scoop, the ’80-’81 Z-28’s scoop actually did scoop air. And not only that, it had a throttle-actuated flapper door that opened when the driver floored the accelerator. The second generation Trans-Am last had a scoop like this in 1972 – and never had it again. 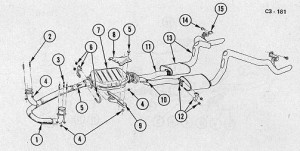 Under the hood, a special (unique to the ’80-81 Zs) air cleaner with an open top and compressible rubber ring that created a tight seal, so that the 350 breathed in cooler, denser outside air (more hp) rather than the less dense air circulating around the hot engine. The air-induction scoop shared its rearward orientation with the TA’s now not-functional scoop – the idea being to duct in air from the low-pressure area at the base of the windshield. Whether it worked better than a forward-facing “ram air” type of scoop is still being debated, but what’s not debatable is that the air-induction scoop was a scoop – and not a decal. 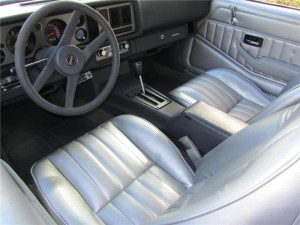 The ‘1980 Z-28 also got a package of aerodynamic  enhancements that brought it on par with the Trans-Am. Technically, some elements (such as the fender vents) appeared first in 1978, but the package totale did not come into blossom until 1980. You got the fender slats (new look for the new model year, no longer shark-gill slatted as in ’78-’79, but with a single large opening now), the three-piece front and rear spoiler system and the functional air induction hood scoop (the ’78-79 Z28 had forward-facing, purely decorative scoop).

The larger – and much better designed – Fisher T-Tops were now the only factory-available T-tops. Previously, one could order the smaller Hurst hatches – easily distinguished by their bright chrome trim (and tendency to leak) as opposed to the Fisher tops’ blacked-out trim (and more effective weatherstripping). 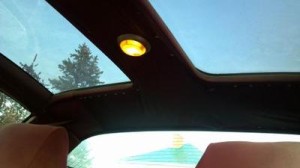 A very attractive billboard-style graphics package that spelled out “Z28” along the flanks of the car (as well a similar decal on the center section of the rear spoiler) completed the look.

But wait, that’s not all.

Finally, Chevy put aluminum wheels on the menu. They were not 15x8s (and would never be) but they were at least alloy – and so a big improvement over the body-colored stamped steel Rallye wheels that were take it or leave it on the ’77 1/2 Z-28. 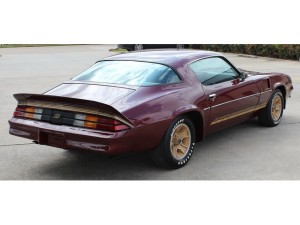 The Z’s overall appearance had been mightily cleaned up (beginning in ’78) by emulating the body-colored/bumperless look pioneered earlier by Pontiac. And while Pontiac radically changed the face of the TA several times during the mid-late ’70s – going from a pair of round headlights in ’76 to four square ones in ’77 – Chevy took a much more evolutionary approach with the Camaro. The profile of the ’77 (actually, the ’74) was smoothed and rendered in slick body-colored urethane – but never fundamentally changed. Which was good – because it looked great. Chevy succeeded in modernizing what had by then become an aging platform that the public had begun to lose interest in.

The mightiest engine available for the second-generation Trans-Am’s final two years was a turbocharged 301  – a puny 4.9 liter job – that was sold paired only with a three-speed automatic. 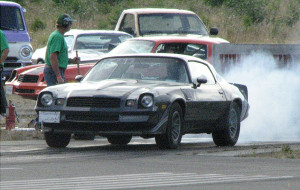 Imagine the damage a 230 hp ’80 Z28 with a four-speed manual transmission could have done – and not just to Pontiac. It’s a shame that Chevy didn’t have someone like John DeLorean at the helm as Ronal Reagan’s first term began. A guy with balls big enough to do something like that – at a time like that.

Instead, the ’80 Z28 (along with all GM vehicles) got an 85 MPH speedometer in place of the previous 130 MPH speedometer. This was done at the behest of the Feds – who thought people might not drive as fast if the speedometer didn’t read as high – and thereby save gas. 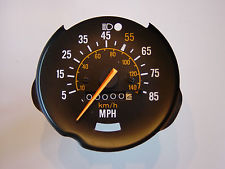 Still, the ’80-’81 Z28 offered the best you could get in a late second-generation F-car. The car looked fantastic – and although the LM-1 350 may not have been an L-82, it was still a 350 small block and as such, easily amenable to the standard hop-ups. A weekend cam swap, intake/carb/ignition tuning – and you had yourself an animal. In contrast, the ’80-81 Trans-Am was hamstrung by its weird 301 turbo engine – and engine that did not share parts with other Pontiac V-8s and for which there was (and still is) nil in the way of aftermarket performance upgrades. You were pretty much stuck with what the factory built, which wasn’t anything much to brag about. 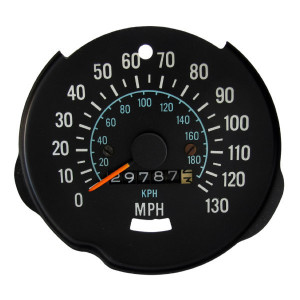 And popping out the ridiculous 85 MPH speedometer and popping in the previous year’s 130 MPH unit was easy enough – though you’d miss the fun of rotating the 85 MPH speedo’s needle all the way around – back to 15 MPH.

Thanks again to all of you!