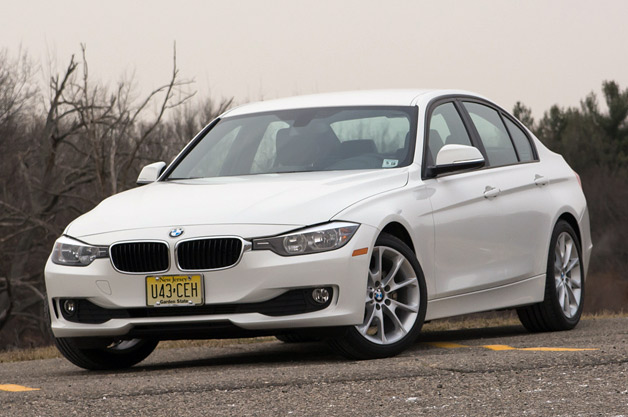 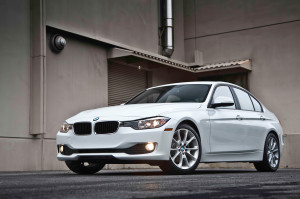 BMW has grokked that people – and not just po’ people – are paying more attention to what they spend – and what their money buys. And BMW is by no means the only high-end car company making a case for itself on sensible grounds. See, for instance, the new under-$30k to start Mercedes-Benz CLA sedan (review here).

But does it mean the good times are gone? 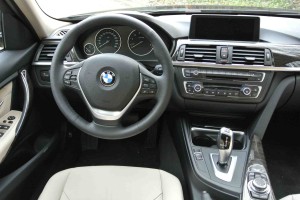 The 320i is a “value priced” version of the 3 Series sedan. It’s stickered closer to $30k than $40k to start – and is as easy on gas as some current-year economy cars.

In addition to the modestly priced 320i, BMW has also added a new diesel engine option to the 3 Series lineup, brought back the wagon bodystyle, introduced a new hatchback bodystyle – and bifurcated the coupe to its own separate lineup (now called 4 Series).

This review will focus on the 3 Sedan, especially the new cost-somewhat-conscious 320i version. 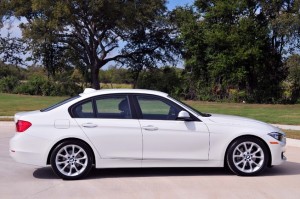 Thousands less to start than a Benz C250.

Easier on gas than an Audi A4 – and also costs less, too.

180 hp might be perceived as a little loose-toothed for a $32k BMW.

Add a couple options and a 320i can approach $40k – and still not have heated seats. Or satellite radio.

If you don’t need the back seat legroom, you could buy a new Benz CLA for less – and get more performance as well as even better gas mileage. 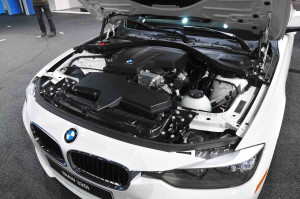 The 320i uses the same 2.0 liter turbo four used in the 328i – but it’s been wicked down from 240 hp to 180 – which (in turn) is what makes it possible for this model to rate a very impressive 24 city, 36 highway with the eight-speed automatic and rear-wheel-drive.

How good is that? These figs are only about 4 MPG or so off the pace of the most gas-sippy economy cars – and they are economy cars. Much smaller (compact and even subcompact vs. the 3’s nearly mid-sized), far less prestigious – and far less peppy – cars.

Though straight-line performance isn’t exactly Fast and Furious, the 320i’s 6.7 second to 60 run is certainly worthy of the BMW spinner. This time easily beats the base Benz C250 (well over 7 seconds to 60) and is very competitive with the A4 (6.2-6.6 seconds depending on whether it’s FWD or Quattro AWD) while handily beating both at the pump. The Benz C250 maxxes out 22 city, 31 highway; the A4 2.0 just 24 city, 32 highway. 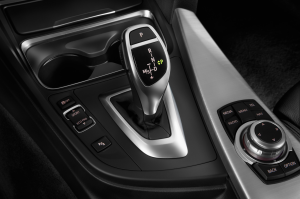 The 320i is slightly less quick if ordered with the available xDrive AWD system (which adds curb weight) but it’s still as quick (or quicker) than the competition – and quick enough to not get embarrassed by a Camry.

As in other versions of the 3 – and other new BMWs – the 320i comes standard with auto-stop, also to help squeeze out the MPGs. The engine will automatically cut out when the car comes to a stop at a red light – and automatically re-start when the driver takes his foot off the brake and depresses the accelerator. There is some noticeable sound – and noise – as this happens. It’s not “paint shaker” bad – as some reviewers have described it – but it can be a little off-putting. Not so much because of the slight noise/vibration, but because of the moment of hesitation it takes for the engine to start – and the car to go. If you’re the kind of driver who anticipates the green , you’ll probably prefer to keep the auto-stop off.

There are three driver-selectable settings for engine operating characteristics: Comfort (default) Sport (more aggressive feel, including sharper shifts from the eight speed automatic) and EcoPro. The latter adjust parameters for optimum economy and you can monitor – in real time, via a display on the LCD monitor – how your driving is affecting fuel consumption.

The one oddity – given the car’s emphasis on economical operation – is the engine’s premium fuel-only mandate. BMW could have further burnished the 320i’s bona fides by tuning the engine to burn – happily – regular 87 octane unleaded. 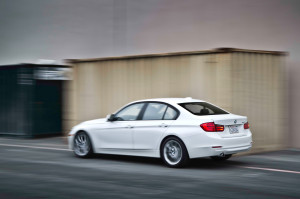 The 320i’s handling is as poised as the 328i’s – or the 335i’s – especially if ordered with the optional Sport package, which adds firmed up suspension calibrations and a more aggressive 18 inch wheel/tire package.

The chief (and obvious) difference is the 60 hp deficit  . . . relative to the 328i. You will have to dig deeper into the powerband to access the power necessary to throttle steer the car through an apex – and the car doesn’t pull as hard coming out of the apexes, or when trying to pass another car.

But in a very real way, this enhances the car’s enjoyment factor in that it takes a more involved driver to work the car to its potential. In a 328i – and even more so in a 335i – the abundance of power makes passing slow-movers almost too easy. Like Tyson (in his prime) taking down Piers Morgan (in his prime). 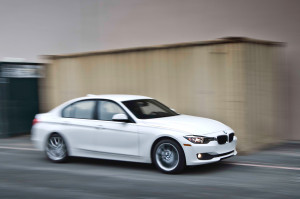 In an effortlessly powerful car, there’s less need to mentally calculate windows of opportunity – and how quickly they’re closing relative to how quickly the car might be able to exploit them. The 240 (and 300 hp) engines in the 328i and 335i are underworked most of the time. But you’ll find yourself working the 180 hp engine in the 320i to get what you need – and that’s fun, a big part of what makes a car a “driving machine.”

Remember: The BMWs that made BMW’s bones as purveyor of Ultimate Driving Machines were cars like the old 2002 series of the ’70s, the 635 CSi of the ’80s – and others like that. These were not uber-powerful cars. But they were cars that itched to be driven – really worked by the driver – who was continuously rewarded with sensory inputs few other cars could deliver.

Even if they were quicker. 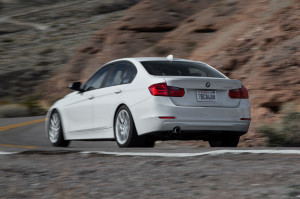 The best way to go – if you are a driver – is with the standard six-speed manual transmission. The eight-speed automatic is superlative from a technical (as well as fuel-efficiency) standpoint. But to make the most of the 320i’s 180 hp – which peaks at 5,000 RPM – you’ll want to row your own. On the other hand, the little engine’s torque peak (184 ft.-lbs. at just 1,250 RPM) is ideally suited to the automatic. Small-engined (and torque-light) cars with automatics are frequently sluggish accelerating from a standstill – but not the 320i. The instant-on torque of the turbo 2.0 engine makes it just as peppy with the automatic as it is with the manual.

So – pick your weapon.

The automatic’s only negative – in my view – is the Game Boy-esque drive-by-wire toggle shifter BMW gives you with every automatic transmission it sells. It provides very little in the way of tactile feedback – which should absolutely not be the case in a driver-minded car. There’s no physical sensation you’ve just engaged Drive – or Reverse. I found myself having to confirm gear range by checking the digital indicator in the main gauge cluster. Park is also a matter of trust. You tap a button on top of the toggle – and computers and actuators do the rest. 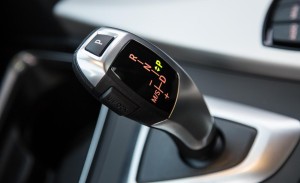 I see no advantage to this relative to a conventional (connected, cable-actuated) shifter lever. It’s not easier to use; it doesn’t free up space on the center console (at least the Mercedes CLA’s functionally similar system – but mounted column-shifter style – does that). And it does add a somewhat worrisome (as I see it) level of complexity to what ought to be a simple interface. What happens when the electronics glitch out on you? How much will it cost to fix?

How long will it take to fix it.?

Physically – dimensionally – the 320i is exactly the same as other versions/trims of the 3 Series sedan. That means it is a bigger car than the new Benz CLA – which Mercedes is using (very successfully) to undercut competitors models like the 3 sedan. But the 3 – unlike the compact-sized Benz CLA – is an almost mid-sized car.

Not quite – but close. 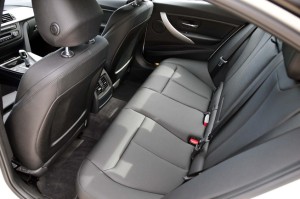 Another interesting stat: The 320i (and other 3 sedans) actually has more front seat headroom than the Camry: 40.3 inches vs. 38.1 (though it’s the reverse in the second row, where the Camry tops out at 38.1 inches vs. 37.1 for the BMW). Still, it’s interesting that in a very real way the sportier BMW is roomier in a key category than the Mrs. Doubtfire-esque Camry.

Trunk space is tight, however – just 13 cubic feet. This is actually slightly less than the much smaller CLA gives you (13.1 cubes) and far less than a typical mid-sized sedan like the Camry gives you (15.4 cubic feet). 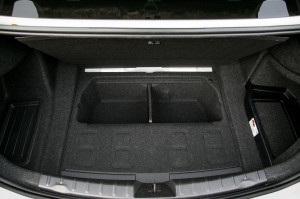 My sole beef with this car is that it doesn’t come standard with a couple of features that really ought to be standard in a car with a base price tickling $33k. These are: heated seats and satellite radio. Ok, maybe not everyone wants heated seats – but no satellite radio? In 2014? Really?

It felt quaint, almost, trying to find an FM station to listen to. Does anyone even listen to terrestrial radio these days? But that’s neither here nor there. What is relevant is that satellite radio is almost de facto standard equipment in new cars costing Camry-Corolla dollars. It therefore ought to be standard in a car costing BMW dollars – even if it’s “only” a $32k BMW. 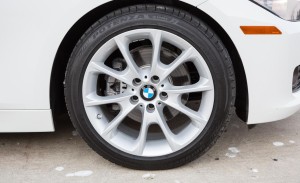 My test car actually stickered out closer to $40k ($39,350) with a few options – neither of which were heated seats or satellite radio. First, xDrive AWD – that boosted the base price to $34,550. Add another $1,000 for the Sport package, which includes an ugrade 18-inch wheel/tire package, sport seats, an “M” steering wheel (nicely padded and stitched) plus an anthracite headliner. Navigation tacked another $2,150 to the car’s bottom line. But still no satellite radio or seat heaters. Meanwhile, the Benz CLS250 I had the week before stickered for about $36k – and not only had top-drawer seat heaters, it also had an upgrade/premium audio rig with music storage hard drive and satellite radio.

And a 38 MPG highway rating.

BMW does toss in free routine maintenance (engine oil and filter, brake pads. windshield wiper blades) for four years or 50,000 miles – and that’s very nice. But I think BMW should give some thought to not asking extra for satellite radio – and maybe toss in the seat heaters, too. 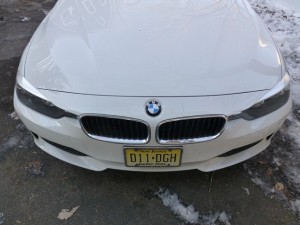 Other than this, I can’t find much to fault – and there is much to praise. The 320i’s fuel efficiency is superlative – and it does not come at the expense of the qualities that make a BMW desirable: How it drives, how it feels – how it makes you feel.

It made me feel pretty good.

If you’re interested in a BMW – but not high gas bills (or a high sticker price – if you’re careful with the options) then you ought to check this one out.

Even if they do charge extra for the bun warmers.

PS: Please consider supporting EPautos. We rely on readers like you to keep the wheels turning. Our donate button is here. For those not Pay Pal-inclined, you can mail us at the following: