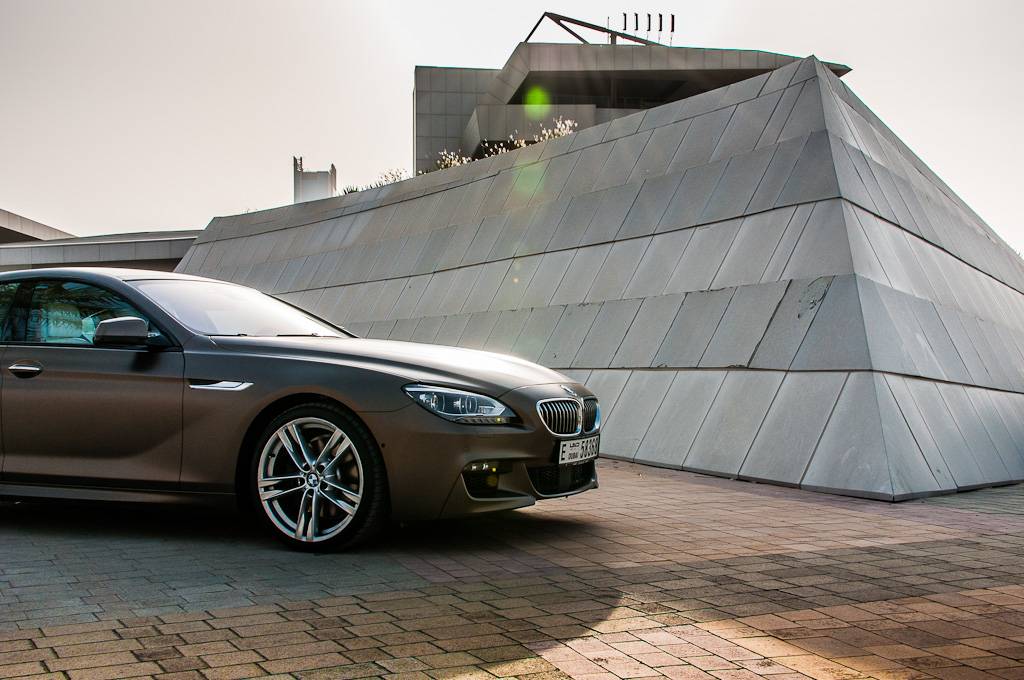 You want one thing but – sigh – you need something else.

Can the two be reconciled?

Certainly. It is simply a question of not expecting perfection.

Your spouse, for instance, probably doesn’t conform in every detail to your absolute ideal – but the package was (hopefully) worth the ring.

So also four-door (and four seat) “coupes” like the new BMW 6 Gran Coupe. It isn’t everything you’d want in a real coupe – it’s heavy, for openers and there’s no manual transmission option. And as a sedan, it has some liabilities, too – including room for just two passengers in the back and not much room for anything in its Miata-sized trunk. 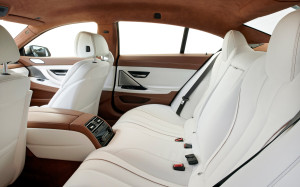 But it can carry more than two. It’s kid/family viable.

And yet it looks almost as unencumbered as the single guy coupes that went away with the arrival of the wife and kids, the need to be more sensible. This car is a socially viable way to be responsible and irresponsible at the same time. To indulge the devil inside in a more subtle way than going out and trading in the Taurus for a cherry red ’70 Firebird like Kevin Spacey did in American Beauty.

The 6 Gran Coupe is (depending on your point of view) a more practical version of the 6 Series coupe – or a (much) sexier alternative to a 5 Series sedan – with which it shares most of its key dimensions, as well as its powertrains. 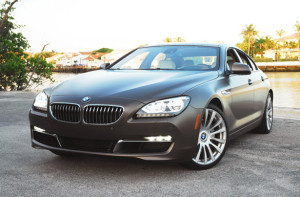 Remember that old saying about speed being a question of money… how fast do you want to go? Same principle here, except we’re talking style.

How good do you want to look?

xDrive all-wheel-drive is now available with either of the Gran Coupe’s engines and the iDrive controller input has been modified to be more dummkopf proof. 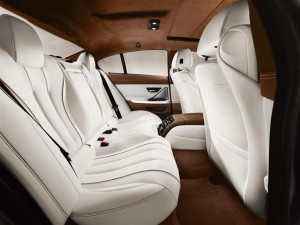 Much more back seat room (two-plus inches more) than in Porsche Panamera.

Much more headroom in both rows than in the CLS550.

Only about $1k less to start than the Porsche Panamera. 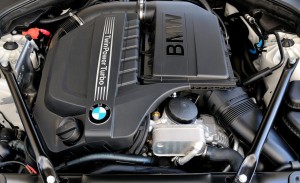 The Gran Coupe’s engine lineup is identical to the 6 coupe’s – which means standard equipment is a 315 hp turbocharged in-line six (also the base engine in the 7 Series sedan) with a 445 hp turbo 4.4 liter V-8 available as an upgrade.

Both engines come standard with an eight-speed automatic and you can specify RWD or xDrive AWD with either. The drivetrain can be driver-tailored for more – or less – aggressiveness via four settings accessed via a button on the center console. These range from Sport Plus (traction/stability control dialed back, throttle tip-in made sharper, shift points made higher in the powerband) to Comfort Plus, which dials things back in the opposite direction. 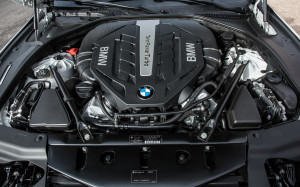 The CLS550 not only comes standard with a much stronger (and more prestigious) V-8 engine, it also – and here’s where it hurts – costs several thousand dollars less than the base-engined BMW. 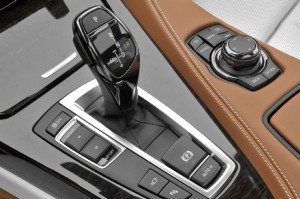 Oddly – sadly, in my view – BMW has elected not to offer the superb diesel engine that’s available in the 5 Series. This engine produces a stupendous 413 ft.-lbs. of torque (vs. 330 for the standard 3 liter gas six) and delivers effortless, velvety thrust – especially off-idle and mid-range (with very long legs on top, too) and the capability to go more than 700 miles on a full tank (vs. 550 for the gas six). It would seem – to me – the ideal powerplant for a big GT, which is really what the GC is. 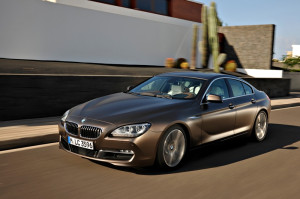 Though the nomenclature says 6, the Gran Coupe has more in common – specifications-wise – with the 5 Series sedan, including an identical wheelbase (116.9 inches vs. 112.4 for the 6 Series coupe) but there are some subtle and significant differences – relative to both the 5 sedan and the 6 coupe – including a rear track (65.6 inches) that’s specific to the Gran Coupe.

But the weight is exceptionally well-managed. If anything, the heft of the Gran Coupe provides the quintessence of the gran touring ride – which is what this car is all about. Though not as nimble as the shorter-wheelbase 6 coupe, it compensates with the composure of the Parthenon. BMW dials up neutral – venturing to oversteer under duress – as opposed to the far more common idiot-proofing of early-onset understeer and frantic intervention of the traction/stability control that afflicts all too many other cars.

Very little fazes this car – not road dips, not off-camber corners. It glides serenely through everything, unperturbed.

It not only looks good, it makes you look good.

The additional 1.5 inches of rear track (relative to the 5 sedan; 65.6 inches vs. 64.1) is no doubt a major contributing factor that helps “plant” all that weight without the car feeling weighty. It’s exactly these qualities that have earned BMWs the appellation, Ultimate Driving Machines. That’s not copywriter crap. It’s the gospel truth. An ordinary driver becomes great in a BMW, if he’s willing to explore the car’s literally phenomenal tenacity and trust that its capabilities will – usually – more than compensate for his deficiencies.

Some testers have sniped at BMW’s electric-assisted power steering (this is becoming common industry-wide as a way to eke out some fuel efficiency gains relative to an engine-driven power steering system) but while feel may not be as mechanically telepathic as it once was, precision has not suffered. The car goes where pointed, exactly – no more or less. 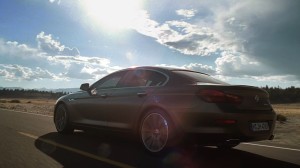 The standard eight speed automatic can’t be faulted (well, I can’t fault it) but it would have been interesting had BMW put a manual on the roster – if only to annoy Porsche. One expects a Mercedes (let’s face it, the Trophy Wife car) to be automatic-only. But a Porsche? Yet, that’s the fact. The Panamera – regardless of engine – comes only with a seven speed automated manual. If BMW had put a third pedal in the Gran Coupe, it would have conferred sportier-than-thou status on the BMW relative to the Porsche -a finger in the eye for sure – and more to the point, it would have given buyers in search of a more interactive experience just one real choice rather their choice of any of the three. 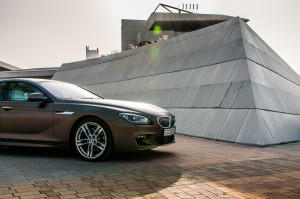 Of the three main players in this segment, the Gran Coupe is – somewhat surprisingly – the most radically slick. My guess would have been the Porsche. But check the specs. The Gran Coupe rides lower – a full inch lower – than either the Panamera or the CLS550 and – here’s the one that really tells the tale – it’s almost three inches closer to the earth than a 5 series. Stand next to Gran Coupe and feel tall.

The car sits that low.

It gives the car the poised tension of a cat about to pounce on its prey. But – to my eye – it’s not over the top. The flanks are fluid, coherent – a tight-fitting ensemble. In contrast, the Benz’s pontooned rear quarters come off as borderline cartoonish and give the car a jacked-up pose that made me think of my high school ’78 Camaro with air shocks and its ass up too high and its nose too low. 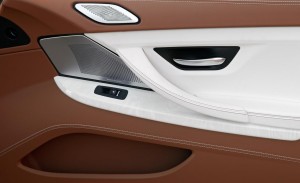 The Panamera’s better, but the extended/fastback rear seems a little bulbous and disjointed to me. Not necessarily ugly. Just not beautiful.

Now, with just 5 inches of ground clearance (vs. 5.7 for the Porsche) you will probably want to be a bit more circumspect about approaching steep driveways – and curbs, as when pulling into a parking spot. Beauty always has its price.

And yet, the price is not so high as its rivals in several critical categories – headroom, for instance. The BMW gives you 40.6 inches of front seat headroom vs. 36.9 inches in the CLS – that’s almost four inches more clearance for your noggin. 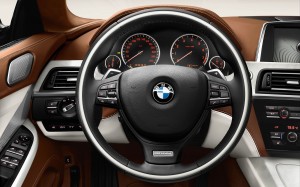 That’s the difference between viable – and not – at least for over-six-footers like me. The Gran Coupe manages to be both sexy and space efficient. Turns out it actually has slightly more headroom for the driver and front seat passenger than the 5 Series sedan – which, recall, stands almost three inches taller.

Like its rivals, the Gran Coupe is emphatically a four seater – emphasized by the extended center console that divides the two rear sport buckets. Legroom, though, is decent – 35.3 inches, only about an inch less than in the 5 Series sedan (36.1 inches), dead heat with the CLS (35 inches) and considerably more generous than in the Panamera, which offers a much tighter-squeeze 33.3 inches. The Porsche’s fastback-ish profile from the B pillar backward does provide class-leading backseat headroom, however: 38.2 inches vs. a duck and cover 36.1 inches in the Benz. 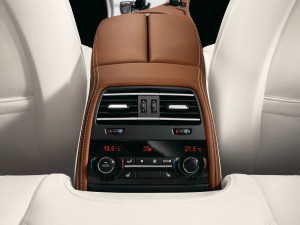 The BMW’s 37 inches slots in the middle.

All these cars are highly personal – and very intimate feeling.

Climb inside and the car envelops you – literally. The door panels roll upward, forming a cocoon around you and your passengers. Very un-sedan. And a very effective conjuring of coupe-ish ambiance. It’s easy to forget about those back seats – until you need them for something.

And then, of course, they’re there. 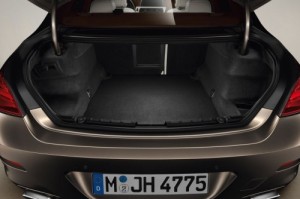 One thing that’s not there, unfortunately, is an adequate-sized trunk. There’s just a nub, really. It looks great from the outside, but when you pop that cute little caboose, you’ll be glad you do have those back seats (assuming you aren’t putting people back there). There’s just just 13 cubic feet of space to work with – vs. 15.3 in the Benz and 15.7 in the Porsche. Here’s a case in point of form taking precedence over function. The BMW is actually a bigger car overall than the Benz (197.2 inches long vs. 194.5 inches) yet the Benz has the bigger – and not by a little – trunk. I’m just speculating, but my bet is the design guys didn’t think it was worth elongating that perfectly tight, gym body little nub for the sake of a couple of suitcases.

Good for them. I’ll take a little less practicality over sheetmetal cellulite every time. 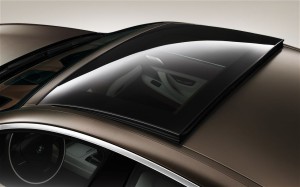 I was kind of surprised to find just a standard-length sunroof in my test car – rather than a full-length panorama roof. The glass is wider than typical, but it does not extend farther back than the B pillar. Ironically, it’s easier to find the super-stylish full-length glass roof on the options list of much less stylish cars.

You’d think it would be the opposite – but it’s not.

Also surprising: A heated steering wheel was not included in the as-it-sits base price tag of not far from $80k. BMW – and Benz and Porsche – should probably take note of the fact that amenities such as heated and cooled seats – and heated steering wheels – are becoming rather common in cars that cost literally half or less as much (check out some of the new Kias) and probably ought to be part of the standard equipment package in cars of this caliber rather than extra cost options. 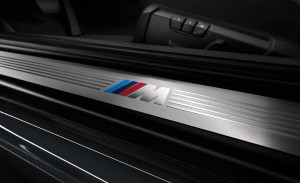 Kind of related to this: Be aware that unless you pony up for the M Sport package your Gran Coup’s top speed will be electronically limited to a figure well below what you probably – and rightfully – expect a car such as this to be capable of. It’s a tire issue, ostensibly. Non-M Sport Gran Coupes get an all-season (and not high-speed rated) 18-inch wheel/tire package, but springing for the M Sport uprates the rolling stock to 19 or 20 inches and more aggressive compound/high-speed tires. Thusly fitted, BMW loosens the leash a little – and the car is now capable of 155 MPH before the computer calls a halt to the illegalities.

You can custom-tailor the Gran Coupe with special-order paint, as well as via the Individual Composition Package, which includes dark tinted window trim, crushed suede headliner and your choice of piano black, white ash or sycamore wood trim. 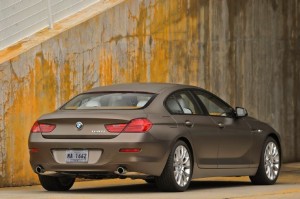 Nothing’s perfect in this world – even Marilyn had her mole. But sometimes, you get damn close.

This is one of those times.