This is my least favorite thing to do (well, it’s right up there with “buckling up for safety”) but – like buckling-up – it’s something I find myself having to do every now and then. 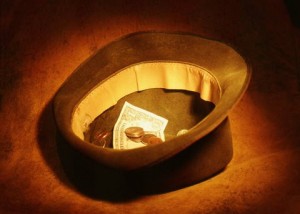 That is, jingle the coffee cup – and ask again for your support. We’ve got about a week left in the month and we’re about halfway there (see the “thermometer” on the main page, top right). So, please, if you can – and haven’t done so already – consider supporting this site financially. Independent media such as this corner of the Net relies on you to stay afloat.

We are making progress securing advertisers to cover most of our nut – speaking of which, please patronize them if you’re in the market for radar detectors (Valentine 1) or precious metals (Austin Coins) – but it’s a process and will take time. In the meanwhile, it’s you guys who keep us going. For which we are grateful – and hope to continue to deserve it.