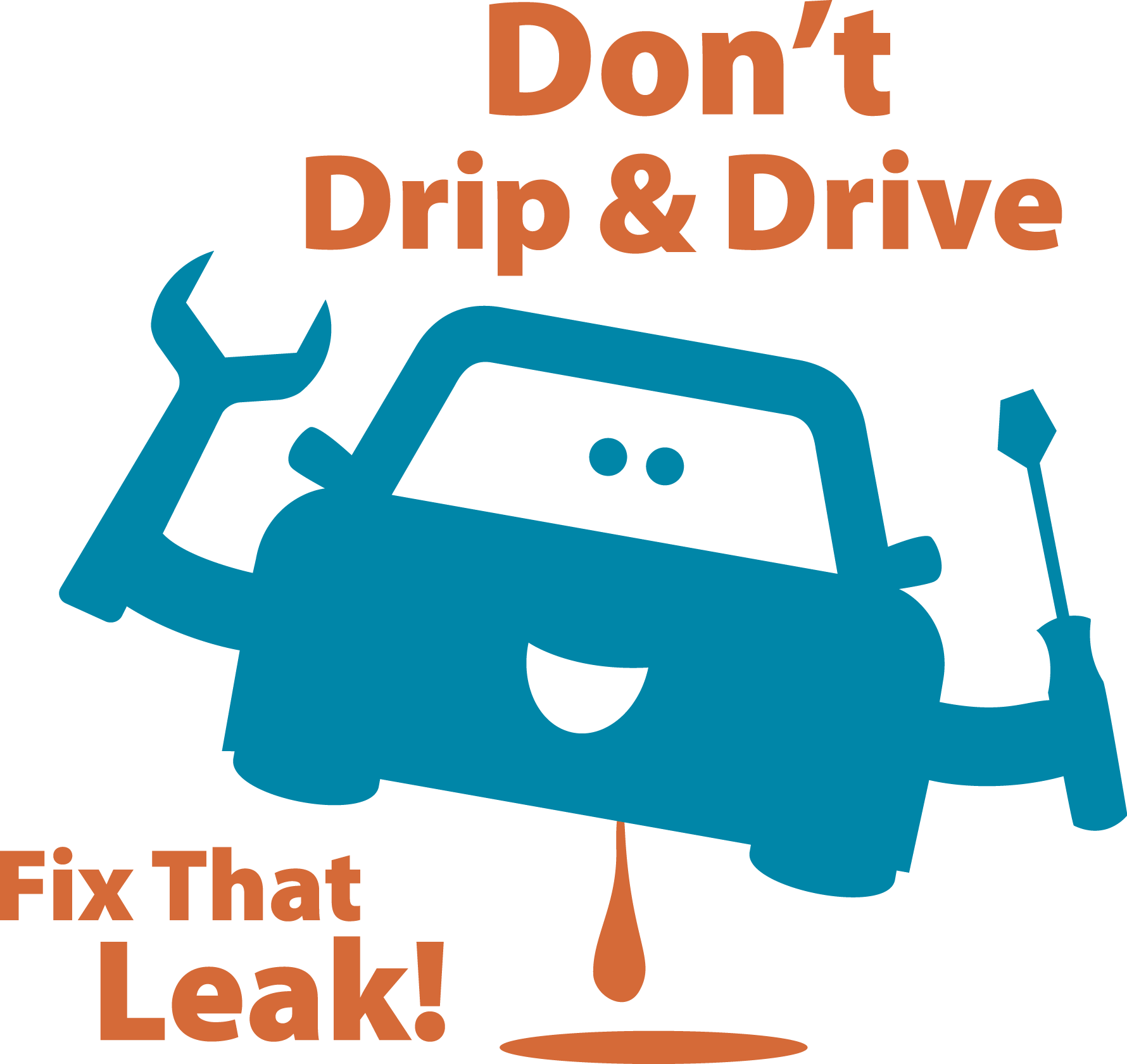 It’s a little odd to think of it this way, but cars and people are both machines, with systems (circulatory, cooling, hydraulic)  . . .  and when either leak, it’s cause for further investigation. 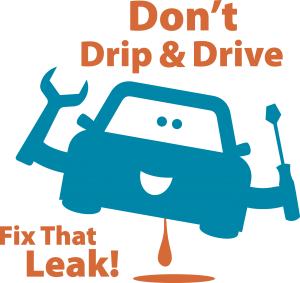 Usually, this is engine oil seepage – and it’s usually nothing to worry about if it’s not a steady drip – and if it’s a small drip.

A car engine consists of many pieces of metal bolted together, with gaskets sandwiched in between these pieces. The gasket’s purpose is to act as seal between parts, but over time – due to repeated heating/cooling cycles (and expansion/contraction) as well as deterioration of the material from contact with oil/fuel and simple aging, it is not unusual for some seepage to occur. This can lead to drips as the seeps accumulate  – which leaves those small stains/puddles on your garage floor, usually directly underneath the engine (a further clue that you’re looking at engine oil).

If the car is more than five years old, consider such drips and puddles normal – provided they are small. And provided they don’t get bigger. A drip that results in a puddle larger than a 50 cent piece – especially if it “wasn’t there yesterday” is something that ought to be looked into further. It’s probably not an immediate emergency, but it could portend an emergency situation (e.g., failing mail seal).

If you see a steady drip – think, leaking garden hose – that is an immediate emergency. Or might be. Do not risk it. Do not drive the car. It is possible a major seal is on the verge of failing and if it does fail, most of your engine’s oil could dump out, Exxon Valdez-style. And if you don’t notice it immediately – and continue to drive – your engine could very quickly transform into several thousand dollars’ worth of scrap metal. Never mess around with any leak that’s the mechanical equivalent of blood pouring out of a wound. 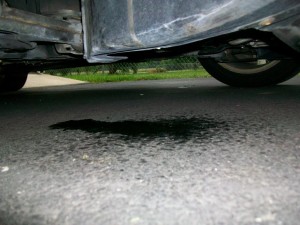 On the other hand, it is absolutely normal  for a car more than a couple of years old to exhibit some seepage – and leave some oil spots on your garage floor. The important thing is to notice them – so you you’ll have a baseline – and notice it when the leaks/drips progress from the normal/nothing-to-worry-about to something you maybe ought to worry about.

This is usually engine coolant (aka, anti-freeze), the stuff that circulates in the radiator and both cools the engine and warms the car’s cabin. Leaks can spring from literally dozens of sources, because there are so many components – and they are connected to one another by numerous rubber hoses, any of which can (and will, eventually) leak. Water pumps and radiators can leak, too. 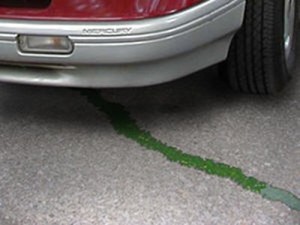 Unlike minor oil seeps/leaks, any evidence of coolant leakage is something that ought to be checked out as soon as possible. Such leaks are clues of an impending failure – such as a hose that bursts – and even if there isn’t a major failure, that slow drip will eventually result in a low coolant level, which will result in your engine overheating. In  most modern cars – which have aluminum engines (or partially aluminum engines) overheating can be catastrophic – as in, time to buy a new engine, or throw the car away.

Usually, coolant leaks are the result of something minor – a routine maintenance item such as a radiator hose that needs to be replaced. But it could be something more serious, such as a cracked radiator (fairly common in modern cars, which often have plastic radiators) or a failing water pump (this is the part that circulates the coolant through your engine; if it goes bad, the coolant will not circulate and your engine will overheat).

Also: Try to keep track of when your car’s cooling system was last serviced. Even if the engine came filled with “long life” coolant/anti-freeze, it is important to check it every year and – in my opinion – flush the old stuff out and replace it with fresh coolant – at least once every five years. This will keep your car running cool – and also reduce the likelihood of having to pay for major repairs such as a (preventable) radiator replacement due to gunk clogging it up internally.

This is likely automatic transmission fluid – which is also not infrequently used in manual transmissions, too (in late-model cars) as well as power steering systems. In automatic transmissions and power steering pumps, the fluid is pressurized – which means even small leaks can spew a lot of fluid. The leak will also usually be worse when the engine is running – which will pressurize the system. This is a good way to source the problem. With the engine idling, the drip will probably be more obvious – and you ought to have an easier time figuring out where it’s coming from. And if it’s more than a drop once every five or ten minutes, it’s something you ought to get checked out as soon as possible. A steady drip is a good reason not to drive the car at all. If you run an automatic transmission low on fluid for even a brief period of time, you run the risk of a total failure – and an expensive rebuild or replacement. 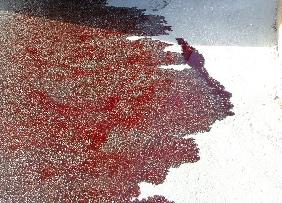 Power steering pump leaks are usually located near the pump itself (look for the accessory with a reservoir and dipstick; it’s the only such engine-driven accessory that will have this) and are most typically found at or near one of the hoses (there are two) that connect the power steering pump to the steering mechanism. A leak – even a big one – is more annoying than catastrophic. Worst case, the pump will squeal horribly – and you may lose power assist. But you can still drive the car. Just be prepared for an upper body workout as the steering wheel will be much harder to turn, especially when the car is driven at low speed.

You’ll usually notice this in two areas: Underneath the front of the car and just under the exhaust tip at the back of the car. The first source is just condensation – and it’s coming from your car’s air conditioning system. It’s normal and absolutely nothing to sweat. The second source – water coming out of the exhaust – is also nothing to sweat. 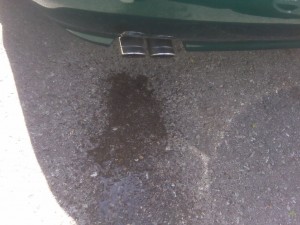 Gasoline contains water; what you’re seeing at the tailpipe is a byproduct of the combustion process. This is why you sometimes see a little water dripping out of the tailpipe or collecting in a puddle underneath the tailpipe. (It’s also why your exhaust system eventually rusts.) On winter days, you may also notice visible vapor coming out of the tailpipe; again, nothing to worry about. Unless it doesn’t go away once the car is warmed up. If you are trailing a cloud of white smoke as you drive, it is a good bet your engine is burning water. Coolant, actually (which is 50-50 water and ethylene glycol, aka anti-freeze). This is very bad news. Because it indicates (best case) a leaking intake manifold gasket (water from cooling passages is seeping into the combustion chamber; a hassle but fairly easy to fix) or (worst case) a failed head gasket, a major – and majorly expensive repair.