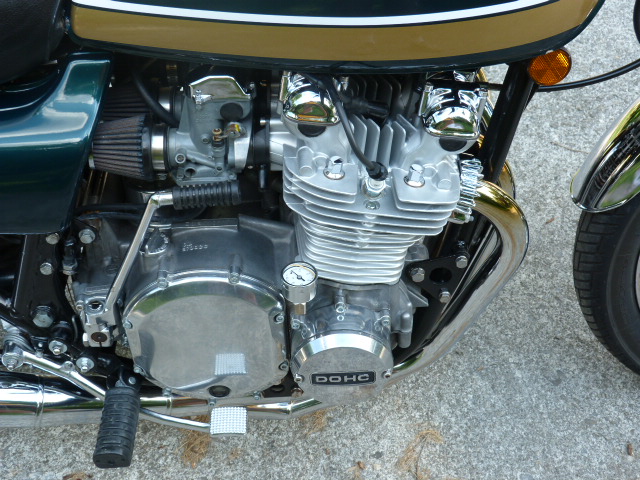 Most of us have  a preference for one – or the other. 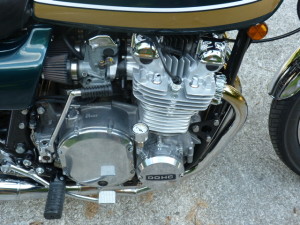 I own – and have owned – numerous examples of both types. There are pros – and cons – either way.

My ’76 Kawasaki Kz900 is, of course, air-cooled. To be precise, it is air and oil-cooled – as all such bikes are. The engine castings are finned for a very functional reason: to help transfer – to radiate – heat away from the engine to the cooler surrounding air and so that airflow over the fins (and so on) can do the same thing. But oil is also used to keep the engine cool (as it does in water and oil-cooled bikes).

Because there is no other fluid to help keep things cool, the oil has to work harder in an engine sans water jackets, radiator and so on. It gets hotter – and thinner – faster. This is why many air/oil-cooled bikes have external oil coolers (mini-radiators, except for oil rather than anti-freeze) and – in some case – deep sump or additional capacity oiling systems. 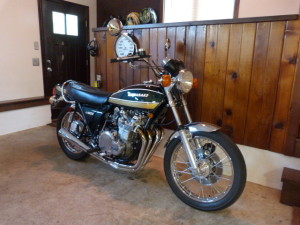 If the engine is well-designed – and factory stock – and in good running order – usually, it will not overheat. However, if the engine was not well-designed, or if it’s been modified to produce additional power – or it is not in good tune (running lean, for instance) it is more vulnerable to overheating and to heat-related damage.

I have modified my Kz900’s engine to make more power. It has received a set of high-compression pistons and its displacement has been increased to 1015 CCs.

Here we come to one of the downsides of an air-oil cooled engine: Power production is limited (at least, as a practical matter) by the engine’s ability to shed heat. 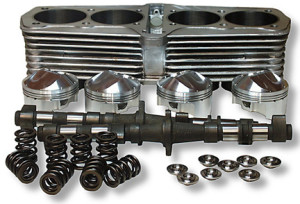 The Kz’s plant is a DOHC four – the same basic layout used in many modern superbikes that have 180-plus hp and 180-plus MPH top speeds. But almost all of these engines are water-cooled. Because making that kind of power makes all kinds of heat – too much for air and oil alone to deal with. My bike’s factory hp rating was 82. I’ve pushed that to around 120 or so. This approaches the limit of reasonableness for an air-cooled street motorcycle engine  . . . if, that is, you’d like it to last. Drag bikes powered by the much-hopped-up versions of the old Zed big four make a lot more than 120 hp – but they only have to live for a few passes down the quarter-mile.

No idling in traffic when it’s 95 degrees outside.

For power – and reliability – you will find that the air-oil cooled layout’s limits are much lower than they are if the engine is soothed by water. 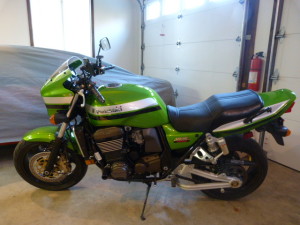 On the other hand… .

Air-oil cooling has a number of plusses to argue for it, too: The layout is inherently simpler. There are fewer parts – you eliminate an entire system from the bike. No radiator, no hoses, no water pump. That means less in the way of regular maintenance chores, as well as  fewer things to potentially break down the road and cost you money. It also means – usually – that the engine will be much more accessible and easier to work on. As well as prettier – because the engine will be cleaner – less obstructed from view by all the aforesaid stuff.

That’s worth something, surely.

A few years ago, I was out riding my ’03 Kaw ZRX1200 – a modern sport bike with a water-cooled engine. The temp gauge began to edge up to the unhappy zone and as I rolled up to a red light and stopped, I caught the can’t-mistake-it-for-anything-else aroma of anti-freeze burning into steam. My bike’s radiator had a pinhole leak – probably caused by a piece of road debris chucked into it at high speed as I was blasting down the highway a few minutes prior – and a jet of coolant was spritzing the headers. Luckily, I was not far from my usual bike store, so I gimped the Rex there – just barely making it before the needle went all the way red as the last of the coolant bled out. 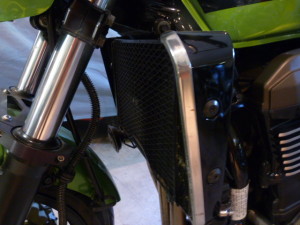 The new radiator cost me $400 – not including labor to install (I was sans tools and at their mercy).

Even if that never happened, it would still be necessary to periodically drain/refill the system with fresh coolant. Check – and, eventually – replace the hoses, thermostat and water pump. It’s part of the deal. And water-cooled machines are prone to scale build-up and rotting of threads exposed to the coolant. A 40-year-old air-oil cooled bike has no such issues – but you have to be really careful about buying older water-cooled bikes. If the radiator of a 40-year-old bike is crusted up with scale, bet your bippie the inside of the engine is, too.

You’ll never have that problem with an air-oil cooled bike like my ’76 Kz900 (or my single cylinder dual-sport). 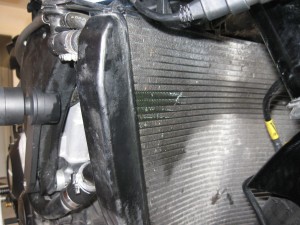 In fact, if you leave the thing alone – no high CR pistons, overbores and other such – and simply change the oil and filter every now and then – you’ll probably never have any problems, period.

And that’s all I have to say about that.