Winter Storm Mossberg is now on deck. 70 degrees today – a brief tease – then 11 degrees by tomorrow night, along with a “wintry mix”  – freezing rain and maybe 3 inches of frozen sky-piss (snow).

It’s technically Winter Storm Titan but I like Mossberg better because it conveys my mood – my inclination – after three months of almost nonstop abuse at the hands of this endless, torturous winter. Mr. Mossberg eases the pain, makes one forget… .

No doubt you have heard of “climate change”? The new – beautifully all-encompassing – term for whatever happens to be happening weather-wise is Man’s Fault and must be handled by forcing everyone to ride an electric bus to work and live in a PJ O’Rourkian stack-a-prole urban housing hive from which the said proles can walk to work and back?

I say bring back global warming. Literally bring it back. We need it. Warming, that is. There’s been a definite lack thereof for some time now.

Last summer wasn’t. Where did the global warming go? My part of the globe has been ball-shriveling cold.

Third week of April, 2013 – and there was four inches of frozen sky-piss on the ground here in SW Virginia. Then followed a lot of rain – and nary a day over 80. In short order it was winter. Again.

With no end in sight.

The brutality shows no sign of abating. 11 degrees on deck for tonight. Possibly another 4-6 inches of frozen sky-piss on its way today. The Koi in the pond outside the kitchen window are dead. They thrived for ten years . . . until this year. I have cut eight shivery golden bodies out of the ice … the foot-thick ice … with my chain saw. The pond is four feet deep in the deep end. It’s not enough. Days on end of temps ten, twenty degrees below freezing have done their work.

Everything is dying – including my will to live.

Action must be taken. Man has taken far too long a cig break. It is time for him to get all anthropogenic, baby – and warm up this got-damned planet. I plan to do my part today by firing up my old Pontiac muscle car, those eight huge pistons converting as much unburned hydrocarbons into gaseous carbon dioxide and water vapor as possible. The five bikes might chime in, too. Combined, they make – let’s see now – 14 cylinders and (roughly) the equivalent in displacement of a 5-ish liter V-8. Add the two trucks and that’s another eight cylinders (and about 5 liters)  pumping. I could also enlist the tractor, the riding mower… maybe the chainsaws and weed whackers, too.

It will be a symphony of internal combustion. 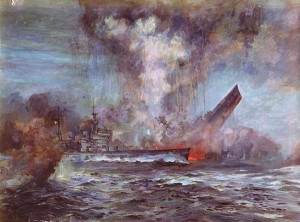 I urge you to join in. If we all got together, maybe – if Al Gore is right – we could add enough “greenhouse gas” to the ether to finally put and end to all this Pluto-like cold.

It’s worth a try.

And even if it’s a futile gesture – like battlecruiser Hood’s “A” turret firing off one final salvo as the ship broke in two and the front half went vertical before plunging to the bottom of the Atlantic – it’ll make us feel a little better.

If only for a moment.