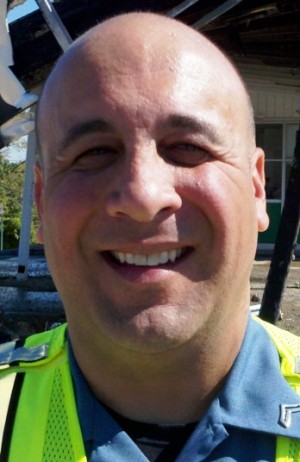 Here’s a clip that “law and order” conservative Republican types might get something out of:

A “hero” cop points a loaded assault rifle at journalists and threatens to “fucking kill” them. What would happen to an ordinary citizen who did such a thing?

He’d likely be dead faster than you could say “officer safety.”

If, that is, a cop saw an ordinary citizen raise a loaded rifle, point it at someone and threaten to “fucking kill them.”

When cops point loaded guns at ordinary citizens and threaten to “fucking kill them,” it’s ok.

Just as it’s legal for cops to speed (and do other things ordinary citizens dare not do) with virtual impunity. To abuse people egregiously – and then be assigned “desk duty” or (better yet) put on paid leave.

Not even the worry of a reprimand – much less the felony charge (minimally) that would result were an ordinary citizen to raise a loaded weapon in the direction of another person in public.

Ask yourself: If these “heroes” behave this way on camera – toward white journalists – can you imagine how they behave off camera, toward blacks?

Note to Republicans: This is not a defense of the blacks who’ve been looting. That – the looting – is peripheral. The Ferguson Occupation is central. 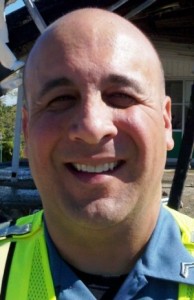 The in-living-color display of what the state’s enforcers really think of us – and what they are itching to do to us, given the least provocation.

That is, the least – the flimsiest – excuse.

A great many of these “heroes” are bullies; some outright sadists. Harsh? No. What’s harsh is a thug scrum of cops beating a homeless man to death; what’s harsh is maiming a baby with a flash-bang grenade during a state-sanctioned home-invasion “raid.” The depressingly routine shooting of people’s pets. Etc.

Just a brief sampling; there are many more such examples (EPautos has a running catalogue; click here to view).

We are constantly told that cops are “heroes.” But heroes – the real deal – are willing to put their own lives at risk for the sake of other peoples’ lives; to accept risk, to face danger. Today’s cops seem to think, contrariwise, that the slightest perceived threat  to their “safety” justifies a belligerent – even a lethally proactive – response. There is nothing heroic about an armed, body-armored state enforcer raining blows upon, Tasering – even murdering (via chokehold, as in New York recently) unarmed and retreating citizens. To merely argue with a cop – as in the case of now-dead Eric Garner – is to risk a possibly life altering (indeed, life-ending) beat-down.

What we see in the Ferguson video is not an aberration. The isolated case of a “rogue” cop. This sort of thing has become practice.

A fresh video pops up on YouTube literally every week.

Cops “prone” ordinary citizens for nothing more than legally walking down the street with a gun not pointed at anyone. That is, cops bellow FREEZE! and order citizens to kneel/lay face down on the pavement, sights trained on their center mass, and then subject them to a rough search.

For not pointing a loaded gun at anyone.

They do this in clear violation of the law they’re ostensibly paid to enforce. The law that says it’s legal for a citizen to carry openly (or concealed). All it takes to abrogate this law – and point loaded guns at the citizen – is the “hero” cop’s assertion of “concern” for their “safety.”

These assaults under color of law are almost never punished. Just as the “hero” who threatened to “fucking kill” the journalists filming the cammo wilding in Ferguson will not be issued so much as a demerit point for his recklessly criminal handling of an assault rifle.

Remember that old saying, “Ignorance of the law is no excuse”?

It only applies to us. Hell, even when we know “the law” – and they don’t – it still doesn’t matter. Whether it’s our ex-right to peacefully assemble or our defunct right-in-name-only to carry a firearm, the decisive thing now is who wields authority.

They do. Better get hip to it.

The other day, another “hero” explained in print (Washington Post story here) the proper attitude of reflexive deference and immediate submission mundanes ought to hold toward his fellow enforcers of the law:

“Even though it might sound harsh and impolitic, here is the bottom line: if you don’t want to get shot, tased, pepper-sprayed, struck with a baton or thrown to the ground, just do what I tell you. Don’t argue with me, don’t call me names, don’t tell me that I can’t stop you, don’t say I’m a racist pig, don’t threaten that you’ll sue me and take away my badge. Don’t scream at me that you pay my salary, and don’t even think of aggressively walking towards me. Most field stops are complete in minutes. How difficult is it to cooperate for that long? 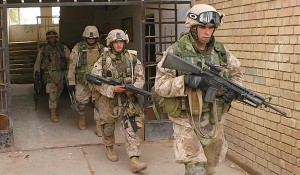 Just do what I tell you.

The chickens have come home to roost.

And we’re all sand niggers now.

Update: After the video above went viral, “officer go fuck yourself” was identified as Ray Albers; reportedly, he has been removed from duty in Ferguson (see here).  However, “removed from duty in Feruson” does not mean Albers has been permanently taken off “the force” – much less that he (unlike any ordinary citizen who did what he is clearly seen doing on video) will face any criminal charges. Because – per Richard Nixon, dearly departed –  pointing loaded rifles at people is only a crime when ordinary citizens do it.