LOS ANGELES (AP) — The California Highway Patrol has vowed to carry out a thorough investigation after a video emerged of one of its officers repeatedly punching a woman he had pinned down on the side of a Los Angeles freeway.

The woman had been walking on Interstate 10 west of downtown Los Angeles, endangering herself and people in traffic, and the officer was trying to restrain her, CHP Assistant Chief Chris O’Quinn said at a news conference. O’Quinn said the woman had begun walking off the freeway but returned when the confrontation occurred.

The video shows the woman struggling and trying to sit up while the officer punches her in the face and head until an off-duty law enforcement officer appears and helps him handcuff her.

Passing Driver David Diaz recorded the Tuesday incident and provided it to media outlets including The Associated Press. He told the AP in a phone interview Friday that he arrived as the woman was walking off the freeway. He said she turned around only after the officer shouted something to her.

“He agitated the situation more than helped it,” said Diaz, who started filming soon after. 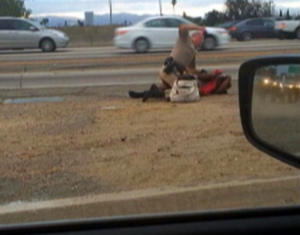 When He Didn’t Sit Down, They “Applied Force”