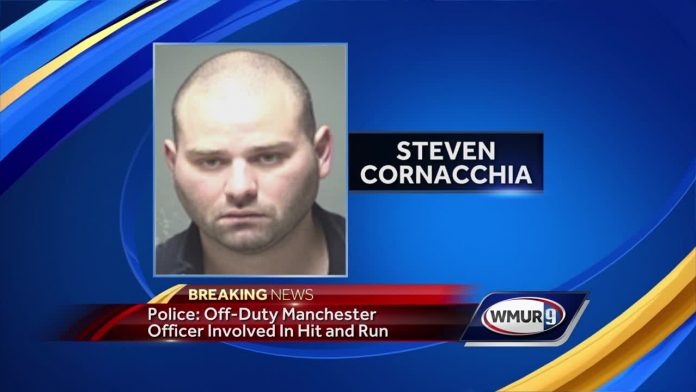 A Manchester, CT “hero” was arrested for hit-and-run last weekend.

Steven Cornacchia, 31, was off-duty when he struck a 22-year-old woman while turning onto West Merrimack Street in Manchester around 1:20 a.m. Sunday.

The victim and her friend told other “heroes” who responded to the scene that a black Ford mustang had knocked the woman down. The collision resulted in minor injuries and cuts on one leg.

According to police, the victim’s friend was able to write down the registration of the car and with it, other “heroes” were able to identify the owner as Cornacchia, a Manchester police officer since 2013.

Police Chief Nick Willard said a short time later, “Supervisors went to the address and located the vehicle but were unable to locate the officer. He was not answering his phone or knocks on the door.”

A warrant for Cornacchia’s arrest and a suspension were issued on May 15. On the morning of May 16, Cornacchia turned himself in.

He was charged with conduct after an accident because he left the scene of a crash without telling police. This is a misdemeanor with a possible one-year jail sentence.

“I am disappointed in Officer Cornacchia, he’s a good man and he made a mistake that reflects poorly on all us,” said Willard.

Officials said Cornacchia has since been released on $1,000 personal recognizance bail and put on administrative leave without pay by the police department. He will remain on leave pending the outcome of criminal and internal investigations.

Cornacchia is scheduled to appear in court again on June 20, 2017